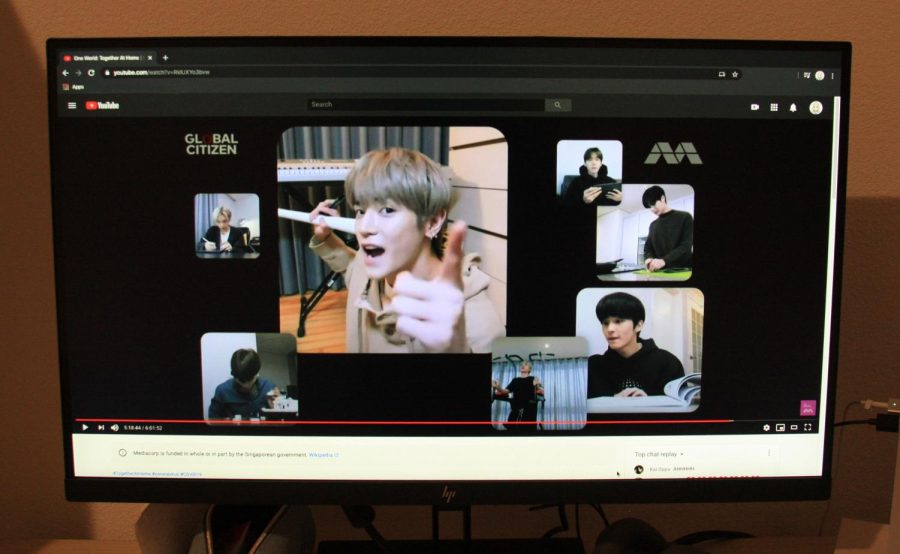 SuperM sings "With You" during the "One World: Together At Home" live stream concert. "This is great for fans because everyone has to stay home, and most have access to YouTube, so everyone can stream it without worrying about getting a ticket," said Catherine Chen, a sophomore at Carlmont.

Live concerts across the world have been canceled due to safety concerns regarding COVID-19. However, that does not stop musicians from bringing joy to their fans, though in a different form.

Various online concerts and live streams have taken the place of live shows, including the large-scale “One World: Together At Home” live stream on April 18. It featured artists across the globe, including Becky G, Ben Platt, Charlie Puth, Ellie Goulding, Hozier, Jacky Cheung, SuperM, and many more.

Global Citizen created the “One World: Together at Home” virtual concert in partnership with the World Health Organization (WHO) to bring awareness to the various health workers that are helping us during this time. Liana Feigelson,a junior at Carlmont, listened to SuperM’s performance, but still yearns for the live experience.

“Although these online concerts are a great way to reconnect fans to their favorite artists, it may also serve as a reminder of what they’re missing out on,” Feigelson said.

By watching online concerts, fans may feel a sharper longing for a live performance, but virtual connections are serving their best for now.

Another virtual connection was BTS’ “BANGBANGCON” on April 17 and April 18, in which they streamed a few of their past concert videos and album setlists. However, unlike the “One World: Together at Home” program, “BANGBANGCON” was not recorded, causing fans to flood in during the times it was streamed. At one point, over two million people were watching.

Additionally, according to some fans such as Catherine Chen, a sophomore at Carlmont, the video was extremely laggy due to the abundance of comments. However, that did not stop the experience from being as special as it could be.

Kami Wang, a sophomore at Lowell High School in San Francisco, also tuned into BTS’ “BANGBANGCON” and had a great experience.

“When you’re online, it feels like they’re only interacting with you, so big concerts like these have become more intimate,” Wang said.

Wang also has viewed some of Oh Wonder’s Instagram live streams, which occur every day at noon. Oh Wonder’s streams allow fans to connect on a smaller scale, which could make the experience more intimate. However, some aspects of live concerts cannot be replaced.

“One of the main things about concerts is the experience and the feeling. It’s a different feeling being in a crowded stadium with blaring music, and that’s something we can’t experience through a screen,” Wang said.

Though certain things, such as the environment, vibe, and ability to make new friends cannot be replaced by virtual concerts, online concerts have brought joy to many.

“It makes fans really happy since more of them can watch. It helps get rid of the boredom and sadness of quarantine,” said Becca Von Tersch, a freshman at Carlmont.