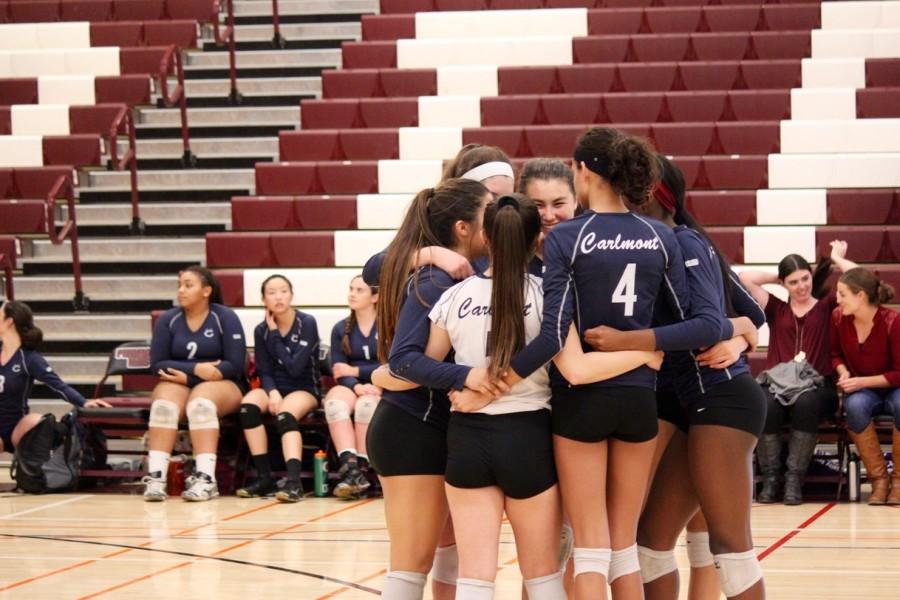 The players huddle on the court before the first game starts against Los Altos High School.

One small step for  a high school athlete. One giant leap for Carlmont volleyball.

The number one seed Los Altos Eagles were defeated by fifth seed Carlmont Scots on Wednesday Nov. 18 at the Central Coast Section (CCS).

In the first game, the Scots won 25-18. Communication was present on both sides, filling the room with a lot of energy. The Eagles struggled to handle Carlmont’s kills and serves.

“I think we were a little step behind. We were not quite ready to play, but we gave it a good shot. We definitely need to get better,” said Los Altos varsity Coach Peter Kim.

The teams continued to compete for the ball. After each point, whether a loss or gain, Carlmont’s team came together for a hug and encouraged each other to think positively. Los Altos stepped up and created strong kills, some that the Scots were unable to return. The Scots had issues with serving the ball in play, and stress was seen among the teammates as the ball continued to fall onto the court. The Eagles won game three 25-21.

“I think in the second game we were nervous and it showed. But even when we had mistakes, I tried to keep smiling,” said Captain Erin Alonso, a senior at Carlmont.

In game three, Alonso and Elena Mateus competed for the ball in the back line, fighting to keep it off of the court. Halfway into the game, confusion arose when an unknown call was made by the referee against senior Natalie Stainton. Despite that, Carlmont won 28-26.

Carlmont proceeded to win the fourth and final game 25-19.

“I felt so much love for my team and coaches. It felt really good that all our hard work paid off,” said Stainton.

The Scots lost in the 2014 semifinals against Los Altos at Piedmont High School. Carlmont volleyball has not advanced to the CCS finals in the past ten years.

Crader said,”Los Altos is a great team. We’ve played them in CCS the past two years. They have a ton of seniors. They served and passed really well, but those are our own strengths too. We thought it was going to be a battle of serving, passing, and digging. We were up and down, they were up and down, but everyone kept fighting. I thought it was a great high school volleyball match.”

Hidden in the crowd, the Menlo Atherton Bears’ coach Fletcher Anderson was seen with his team and assistants taking notes on the match. The Bears won their own semifinals game, so the winner of the second semifinals game would be their opponent.

“I am very happy that we are playing Menlo Atherton in the finals; it makes it more meaningful because they have beaten us once and we beat them once. It is the final showdown with everything on the line,” said Mateus.

The Scots will play the Bears on Saturday Nov. 21 at Independence High School at the CCS Finals. If they win, they will proceed to Northern California (NorCal) on Tuesday Nov. 24.

“Carlmont can win the finals. They split during their league. They definitely have a chance to do well,” said Kim.