Volleyball player serves up story of her experiences 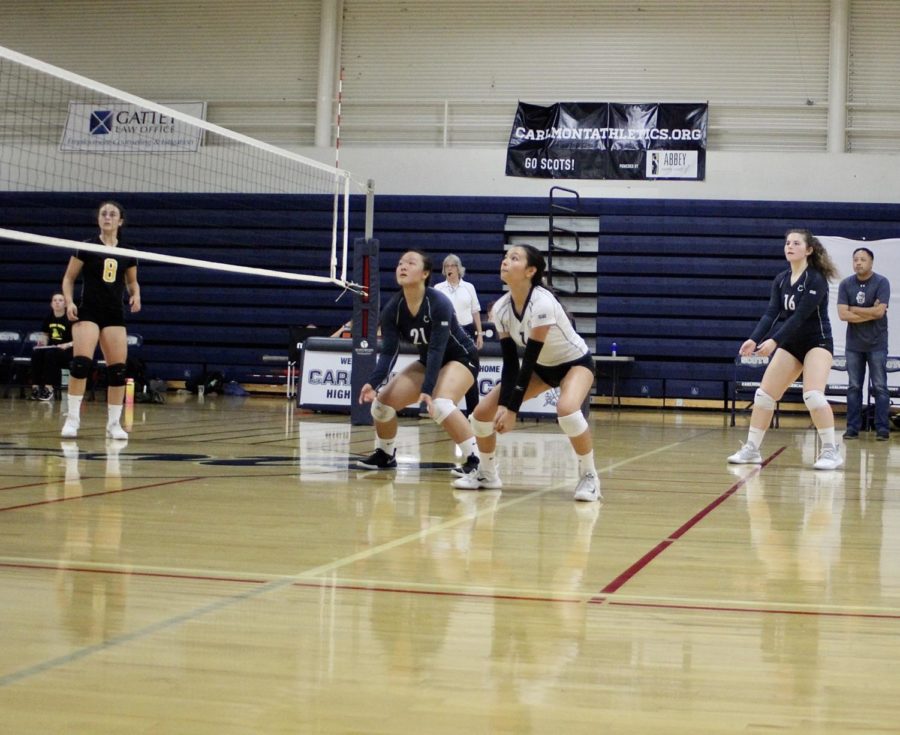 Keani Haake, a sophomore, gets in a defensive position while she waits for the spike.

Sophomore Keani Haake’s passion for volleyball is not only evident in her skill but also her spirit and support of her teammates.

Haake plays for Carlmont’s girls JV volleyball team. She is the team’s sole libero, meaning defensive specialist. She is mainly responsible for the first hit, called a pass or bump, and controlling the defensive back row of players.

Haake started playing volleyball just four years ago. Before that, she played softball for eight years. When she started sixth grade at Ralston Middle School, she decided to switch it up and try something new.

“I loved volleyball right away because it was something so different than anything I had ever done before,” Haake said. “The fast pace makes it so much more exciting to me.”

Haake fulfills her interest in the sport year-round. When the school season ends, she continues to practice by playing for a local club team, 650. Haake says there’s a big difference playing on a club team versus a school team. Clubs often travel to other states to compete in tournaments with other teams from across the nation and are therefore seen as much more cutthroat.

“My biggest accomplishment in volleyball so far has been finding a club team that I love and that challenges me to be competitive at the same time,” Haake said.

“The expectation is that we will coach them the same way as they do in the club, but in reality, school needs to be a much more inclusive environment,” Leslie said. “However, the experience that is brought by these club players is a good thing.”

Haake says one of her biggest inspirations in the volleyball world is Kiari Gier, who plays volleyball for Texas Tech. Despite being just five feet four inches tall, Gier is a Division I athlete, and Haake claims that gives her hope.

Sasha Belov, a sophomore, claims that Haake’s smile and confidence never fail to make her teammates happier and better players.

Eden Abrams-Scheppler added on and said, “As one of the only freshman on the team, I didn’t really have any friends coming into the season. Keani was one of the first people to talk to me and ask me to pepper, and now it has become normal for us to warm up together.”

“Volleyball has shown me the importance of having a good attitude and being lenient. It’s taught me how to have a strong mindset and make sure my actions are purposeful,” Haake said.