Volunteering for ‘Annie Get Your Gun’ 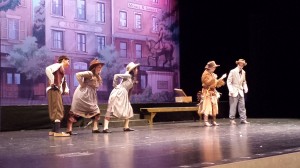 Many believe that actors are what make a musical successful, however one would be amazed by what happens backstage, thanks to the help of many parent and student volunteers.

Parents are a key factor that make the show what it is. Parent volunteers offer much of their time to help the cast and organize all of the props used in the show, costume the entire cast, and supervise the cast backstage.

Leslie Marks, mother of cast member Clare Marks is the head of props this year for the show. She said, “I love participating and being involved in these musicals because I was in musicals when I was in high school. I also love Mrs. Tep and working with such a great and fun group of kids.”

As for the students, every show needs a tech crew and a pit orchestra. At Carlmont, both of those are run by the students. With the help of band teacher and conductor Lieven Smart and theatre manager and technical director Geoff Horn, students take on the stressful job of the technical aspect (including lights, sound, and sets) and the music.

Senior Isabella Colombo, light board operator, said, “I really like the experience and watching everyone come together. I like being part of the whole production and being a piece of what makes it great. That, along with learning about all the technical stuff and how it works together to make the art of musical theater.”

Not only are the pit orchestra members volunteering their evenings and free time at rehearsal with Smart running the music over and over until they’ve nailed it without the cast, they do so to make what the actors do in the show even better than it was before. In most theatre companies, orchestra members are hired and paid for their time, however these students spend hours and hours working on the music to make the show great.

Senior Danielle Bickel, a member of the cast, said, “Without parent and student volunteers, the show would just not be possible.  I truly appreciate all of the volunteers and their hard work because I know that the show benefits greatly from them and would definitely not be as fantastic.”

Annie Get Your Gun, Carlmont’s musical this year is being performed this weekend, Feb. 6 through Feb. 9. To buy tickets, visit www.carlmontperformingarts.com to see Kenzie Philips as Annie Oakley, James Baskerville as Frank Butler, Kurt Hildebrant as Chief Sitting Bull, Tristan Gasperian as Chief Eagle Feather, and many other students at Carlmont act their hearts out.