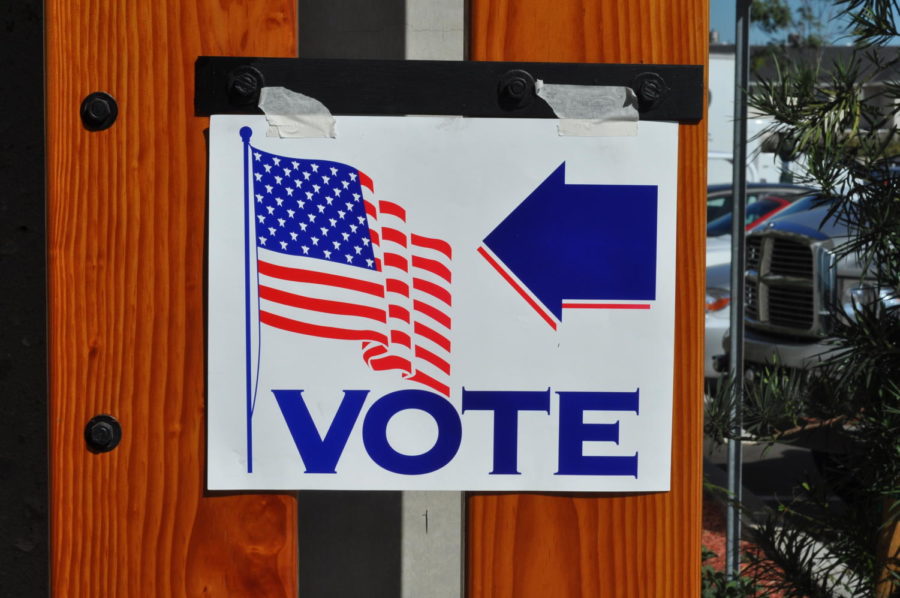 A sign points to a nearby polling place in California. The Voter's Choice Act makes it easier for voters to cast their ballots.

The U.S. is one of the only nations in the world where everybody has the right to vote freely. However, only a little over half of the population exercise this freedom, potentially affecting the outcome of elections.

The Voter’s Choice Act aims to fix this problem by providing new options that allow citizens to register and vote more conveniently. The point of these more accessible methods is to increase voter participation and result in more accurate elections.

“The intention behind [the act] is to increase turnout. It makes our system more democratic. The higher the voter turnout, the more democratic the system, the more reliable the election,” Jennifer Antonow, a member of the League of Women Voters, said in a media conference.

Typically, Election Day is a long, strenuous pain. For many, the lack of available polling stations means an inconvenient commute that takes much needed time out of the day.

Once there, it’s chaos as people crowd in lines for limited polling stations, often waiting for long periods to cast a simple ballot.

People can now vote by mail from the comfort of their homes or drop ballots in nearby polling stations in more convenient and frequent locations. Beginning 28 days previous to Election Day, a minimum of one voting center is available for every 15,000 registered voters.

Californians have been finding ways to combat voting difficulties for years. Citizens, including local high schoolers, have taken action to make registration easier, and government officials like Senator Jerry Hill have openly voiced support for laws simplifying the voting process.

“Senator Hill has been very supportive throughout his legislative career of legislation making it easier for constituents to vote,” said Lisa Chung, a district representative for Hill.

Previously, voters would have to go to a specific polling location assigned based on their address where they would have to wait in line for long periods of time to cast a ballot. The time commitment and overall hassle made some reluctant to vote, contributing to a lack of voter turnout. Once introduced, the Voter’s Choice Act has helped change that.

Now, five counties in California have implemented the act.  These counties have all shown an increase in voter participation.

“An NBC News statement said that five of California’s 58 counties adopted the new system in time for 2018.  Generally, those counties witnessed about a 3% increase in voter turnout,” Jeannie Lythcott, another LWV member, said.

The act is set to be in effect for all of California by 2020 to increase voter turnout. Many believe that it won’t stop there.