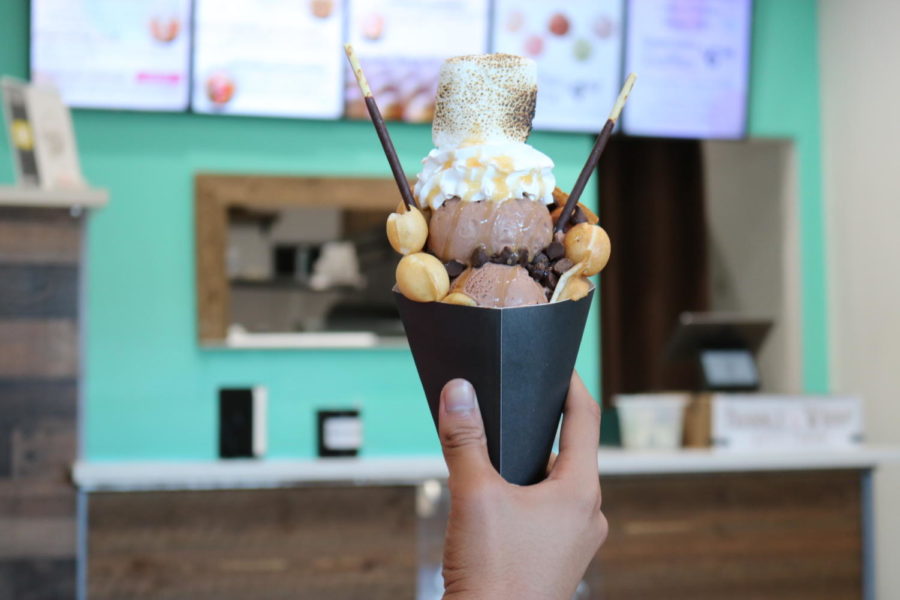 The S'mores waffle is filled with chocolate ice cream and other toppings.

If you had told me five years ago that I would have ice cream out of a puffy waffle cone, I’d have said you were crazy.

However, such egg waffle cones are a signature to Bubble & Wrap, a dessert-based establishment in Redwood City. The cones are made in a special iron, giving them “bubble-y” shapes which make them simultaneously crunchy and fluffy.

Walking into Bubble & Wrap, I expected that there would be a long line. Usually, places that have ice cream or boba or other desserts seem to be packed. However, when I went in, there was no one inside.

Immediately, I noticed the aroma of warm waffles that surrounded the building. There was also some relaxing music playing. It reminded me of one of those “12-hour chill vibes” playlists on YouTube.

There were many different items to choose from on the menu. I didn’t know walking in that there were savory options on the menu, so it was surprising to see a “pizza waffle” and “steak and eggs waffle.”

I decided to choose one of each of the sweet and savory waffles.

The sweet waffle I ordered was the S’mores waffle which came with a waffle cone, of course. In the cone was a double scoop of chocolate ice cream, a mountain of whipped cream, chocolate chips, two chocolate Pocky sticks, a caramel drizzle, and a big, toasted marshmallow on the top.

My first impression of it was that it looked beautiful and that it was huge. The ice cream was your average chocolate ice cream, but when combined with the waffle and whipped cream, it was even more delicious. Additionally, I could break off the waffle bubbles individually and scoop the ice cream with it.

Nonetheless, all good things must come to an end. As time went on, the ice cream soaked through and made the waffle less enjoyable. The marshmallow, while it looked appetizing, was a little too large to enjoy (they should have sprung for lots of mini marshmallows). Also, the marshmallow was supported by a stick that held it up in the ice cream; I was not aware of the stick’s presence and had quite a shock when I bit into it!

In terms of price, the cost of the sweet waffle was $7.50 which, in my opinion, was a good deal. It was so big, in fact, that I couldn’t finish it. I did order another waffle though so that may be why.

The second waffle I ordered was their pepperoni pizza waffle.

It was the same waffle cone, but it had tomato sauce, cheese, and pepperoni on top. It was a lot smaller than the sweet one because although it had the same amount of waffle, it didn’t have as many other toppings to go with it.

The only complaint I have for the pizza waffle is that it’s not worth the price. It was about the same size as a piece of pizza and it was a dollar more than the sweet waffle, coming in at $8.50.

I get that you pay for the waffle part and, even though it was good, it wasn’t good enough to be worth that much more. It is interesting to try, but I think I’d rather have a standard piece of pizza.

Overall, Bubble & Wrap was pretty good. I would go again for the sweet waffles but skip out on the savory ones. It is definitely worth trying and a one-of-a-kind experience.