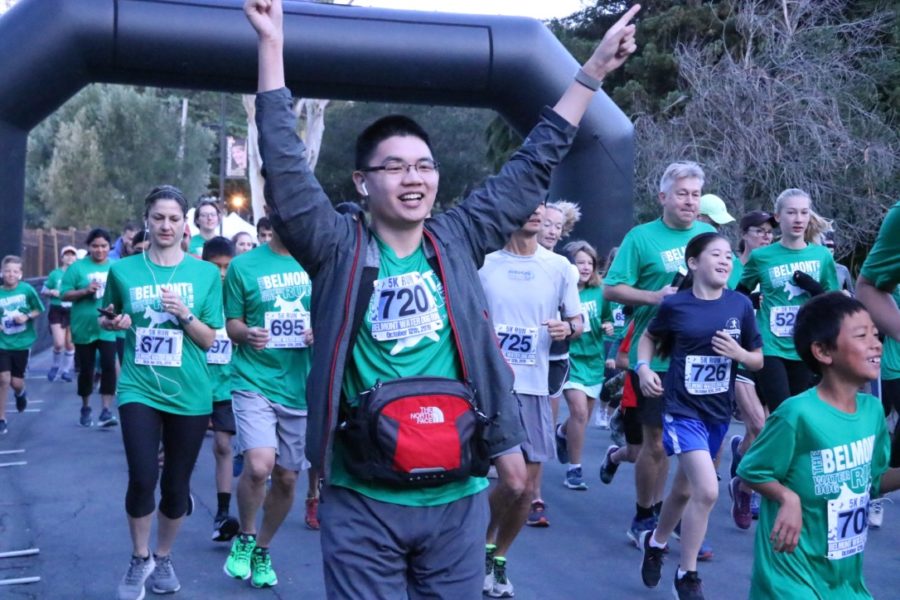 A participant excitedly raises his hands as he begins the 5K.

People throughout Belmont participated in the second annual Belmont Water Dog Run to raise money for education and encourage a tight-knit community.

The event included a 5K, 10K, mile fun, and a dog run. Undeterred by the cold weather and early start times, parents, children, and other members of the community gathered at Notre Dame de Namur University and Twin Pines Park along with their dogs for races that began as early as 7:15 a.m.

The closeness of the community was apparent as the air filled with the excited chatter of those waiting eagerly to start their race.

“Having people out here bright and early on a Saturday morning working together for a great cause brings people closer together,” said Judith Maxwell Greig, the president of Notre Dame de Namur University.

Indeed, the event enabled many to catch up with the community.

The run was filled with people of all ages, and the atmosphere was light and fun. Twin Pines was full of laughter, and the delicious smells of breakfast wafted from the nearby community center. Runners, both serious and amateur, crowded at the starting and finishing lines, preparing to race or to support their friends and families.

After the early morning races, participants stood in line for a delicious breakfast consisting of fruits, coffee, juice, pancakes, and coffee cake provided by the race sponsors, including the Belmont Rotary Club and Hobee’s Restaurant. This allowed contestants to cool off and relax after their race while interacting with friends and family.

Much like Save the Music, the Water Dog Run is an event in which families come together to raise funds for a common cause: education. Family and friends participate in the race to help enhance their children’s schooling while simultaneously furthering their involvement in the community.

“We already have Save the Music, but this event really just topped it off as another school benefit,” Mayor Davina Hurt said.

Not only did the run raise money for the Carlmont Academic Foundation and Belmont Redwood Shores School District, but it also enhanced the feeling of community within the town. Citizens from all different parts of Belmont were able to bond and meet new people through the event.

“You have the entire community signing up to go on a run, and after it, you have breakfast together. You have so many opportunities to talk with each other, catch up with old friends. It’s a great way to bring the community together,” said participant Jono Sison, Carlmont’s sophomore student body president.

A relatively new event, this is only the second time the run has been held. The idea was initially proposed to the city council five years ago. Between coming up with an ideal location and figuring out all the logistics, it took a total of four years to plan the first race.

“I’ve always believed that a city should have a community run that brings people together, and our city didn’t have one, so we made it happen,” event planner Doug Kim said.

The level of popularity and positive feedback the run received led it to officially become an annual Belmont community event. The race will be held again next year on Oct. 10. Community leaders and race planners will begin planning in the next few months.

“Our race has been so much more successful than we thought it was going too, and it just shows that this was something that was needed to help bring people together,” Kim said.