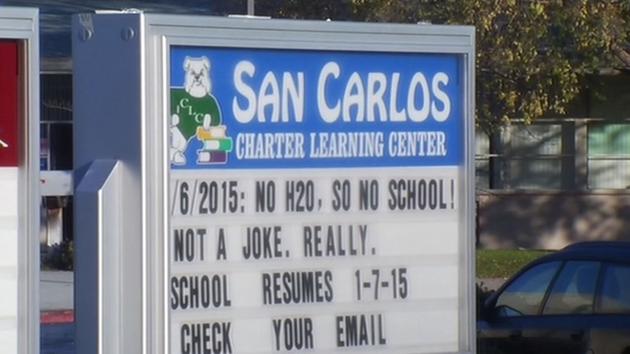 Students at Carlmont high school gained an extra day of vacation due to the water main break on Terra Linda campus leaving the school without access to water.

Between 10:30 and 11 p.m. Monday night the water main was reported broken which resulted in the closing of other San Carlos schools; Tierra Linda middle school, Edison Montessori School and Charter learning center.

According to the Daily Journal Terra Linda Principle John Nazar said, “A six inch hole broke in the line sending watering spurting into the air and flooding the school parking lot.”

At about 5:45 a.m. on Tues. morning the parents of students at Tierra Linda middle school were notified that school would not be in session for the day.

Carlmont high school students came to school on Monday with the anticipation of returning from their long break, but once it was discovered the water would not be back on as quickly as expected, administration sent students home just before 9 a.m.

Students first period teachers were required to speak to parents on the phone to notify them of the cancellation or school and get permission to release them.

Junior Gabriella Lehr said, “When I walked into school Tuesday I went to the water fountain before class and I was extremely confused because nothing was coming out. Soon after I heard the announcement about the water main break.”

All 2,200 students parents were contacted before students could be home.

Carlmont high school set up emergency bathrooms using buckets of water from the pool until the decision was made to send students home.

Without working restrooms and the ability to deal with fire it became a safety hazard to keep students at school.

Sophomore Drew Lehr said, “When I was leaving school I saw lots of trucks in the area and Carlmont seemed in a panic to get kids home and make sure they contacted all the parents.”

Buses back to East Palo Alto and some to Redwood Shores waited on standby in order to provide transport to students whose parents could not get them a safe way home.

Senior Erica Aldenese said, “ I couldn’t believe after all the agony of coming back to school after break they just sent us home, It was surreal.”

Ironically, the water was restored within the hour after students were sent home.