We are losing Earth’s greatest animals

The rhino, one of the world's biggest creatures, has shown a significant decline in numbers over the past decades 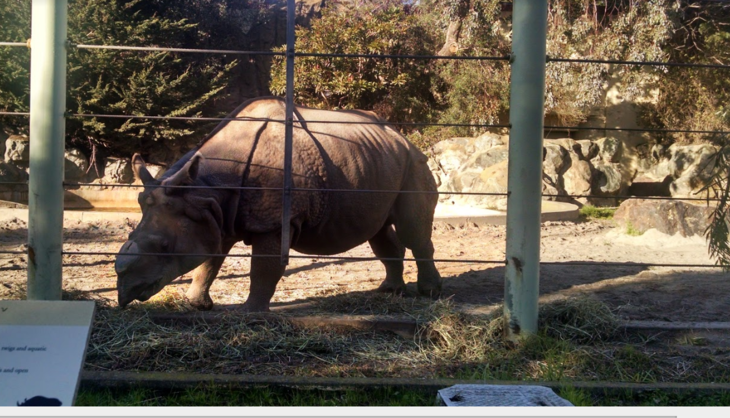 Meet San Francisco Zoo's Indian rhino, Gauhati. This marvelous armor-covered creature weighs in at 5,000 pounds and is about 6 feet tall, a real sight to behold in person. It is devastating to think that one day there will be no more of his kind left in the world.

The great giants of the world are leaving us.

Soon they will be nothing more than distant memories told by grandparents, or old scientific records forgotten on dusty desks. Perhaps they will become legends one day, myths for the superstitious, or fairy tales for the children.

Whatever the case may be, the fact remains that Earth’s biggest land animals are disappearing at an astonishingly fast rate.

This needs to change.

One of the world’s most iconic, large land animal, the rhino, has been hit particularly hard by this ongoing phenomenon.

Indian rhinos are one of the most unique members of their species. They are second biggest animals in the world after the elephants. Reaching up to 5,000 pounds in adulthood, they are true miracles of nature.

Today, there are a mere 2,500 Indian rhinos in the world, and the decline of Indian rhinos is not an isolated event. Rhinoceros numbers all around the world have significantly reduced, with only a total of 29,000 individuals currently remaining in the wild.

All of this horror it is due to two reasons: pouching and deforestation.

Pouching is the illegal hunting, killing, and capturing of wild animals, and it is ultimately a disgusting and brutal act, which violates all codes of ethics that a human being should hold. To make matters worse, it is a completely unnecessary act of cruelty towards innocent animals for the sake of money and riches.

Despite being illegal, pouching is far from gone. The horns of rhinos, for example, are still frequently being sold for up to $60,000.  In 2014 alone, 1,215 rhinos were killed by poachers.

The second factor contributing to the decline of rhinos is the destruction of their habitats due to deforestation.

Deforestation is the act of wiping out forests and the animals within. Deforestation is responsible for the tragic loss of 80 percent of the world’s natural forests. Forests that rhinoceroses depend on for food, shelter, and the very survival of their species.

The truth is that the rhinos have no way of protecting themselves against these two factors. No amount of armor or thick skin can stop people from stealing both their horns and their land. It is ultimately only other humans who can protect them against humans.

And that is exactly what we all must do. Whether that means donating to an organization, bringing awareness, or actually directly helping the rhinos in either zoos or in the wild, we must be involved.

We must protect the rhinos, before it is too late.