Welcome Back Assembly encourages the pursuit of passion 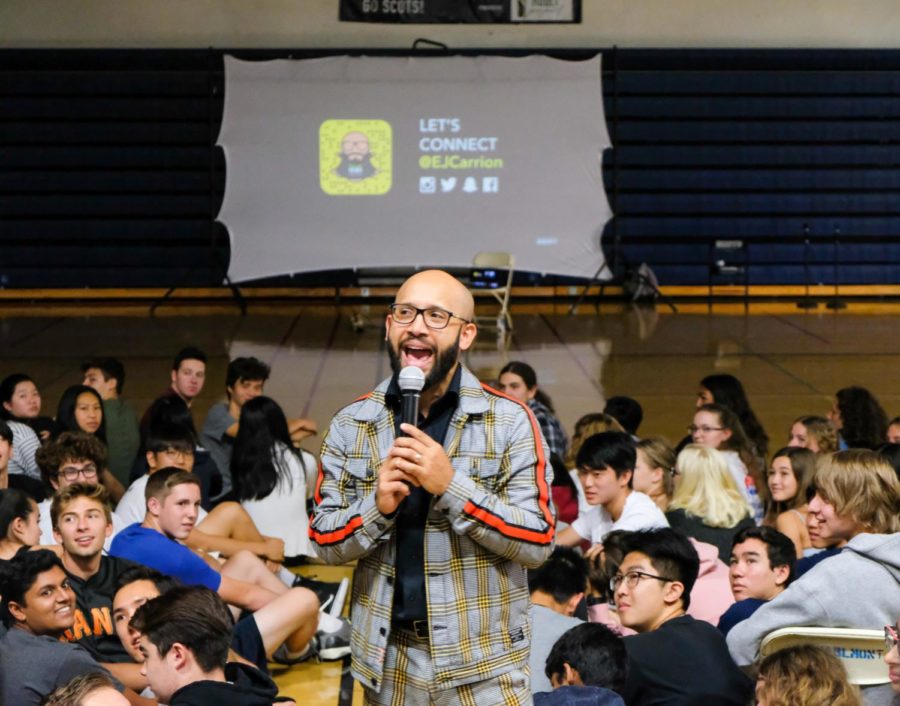 Carrion closely interacts with students as he begins his speech for the 2019 Welcome Back Assembly.

EJ Carrion asked students to jump out of a plane during this year’s Welcome Back Assembly.

Carrion metaphorically compared his experience of skydiving to the student’s ability to take risks and become who they want to be. Carrion used the analogy of “jumping out of a plane” to convey that students should face challenges without fear.

As a best-selling author and CEO of “Students Success Agency,” Carrion has become a well-known speaker in the U.S. Carrion has spoken in over 33 states and has even presented in the White House. As a student, he received the Bill Gates Millennium Scholarship despite his average grades and test scores.

During the assembly, Carrion described his experience as a child growing up in a low-income, single-parent home.

He mentioned that not only did he succeed in accomplishing his goals, his stepfather and his mother also achieved success in their lives.

Through his life stories, Carrion emphasizes that the challenges we face in our lives can influence our character and impact others in the future.

While his presentation did not motivate some, others felt optimistic about their future and the challenges they will soon face.

This year’s speech greatly inspired Andrey Yip, a freshman, whose passion has been strengthened by Carrion’s words.

“I feel the freshman class has so much potential to lead revolutionary change. I feel like we haven’t scratched the surface and our generation already has the amazing ability to expand beyond the confines of today’s society,” Yip said.

By inspiring students such as Yip, Carrion believes the assembly was successful and he connected with the students. He feels he has achieved what he set out to do: to help students develop a more collective mindset to seize the opportunity we have.

“I think the purpose of the assembly was to get the students to think about ‘we’ instead of ‘me.’ To think in a way that allows them to understand the opportunity to go to a school like Carlmont, to live in a city in the Bay, and to have solid parental support,” Carrion said.

Although Carrion presumed he met his goals, some students thought otherwise.

Nick Thompson, a senior, believes that his experience with other Carlmont motivational speakers was more interesting than this years.

“He mentioned about college, a successful career, and what he does. That’s what I thought the presentation was going to be about, but it didn’t really meet any of my expectations,” Thompson said.

Despite some of the student’s disappointment, Jim Kelly, the ASB activities director, views the Welcome Back Assembly from a different perspective.

“The Welcome Back Assembly is a motivational assembly to get kids to focus on something positive in their lives to keep them motivated throughout the year,” Kelly said.

Overall, Carrion’s message of opportunity resonated with many students, and he achieved what ASB wanted him to do, even though he didn’t inspire every single student.

“What’s important is understanding that when you wake up, you realize how lucky you actually are,” Carrion said. “You should realize you have no right to waste what you’re given. And so you have the opportunity to be great. You just have to recognize it.”