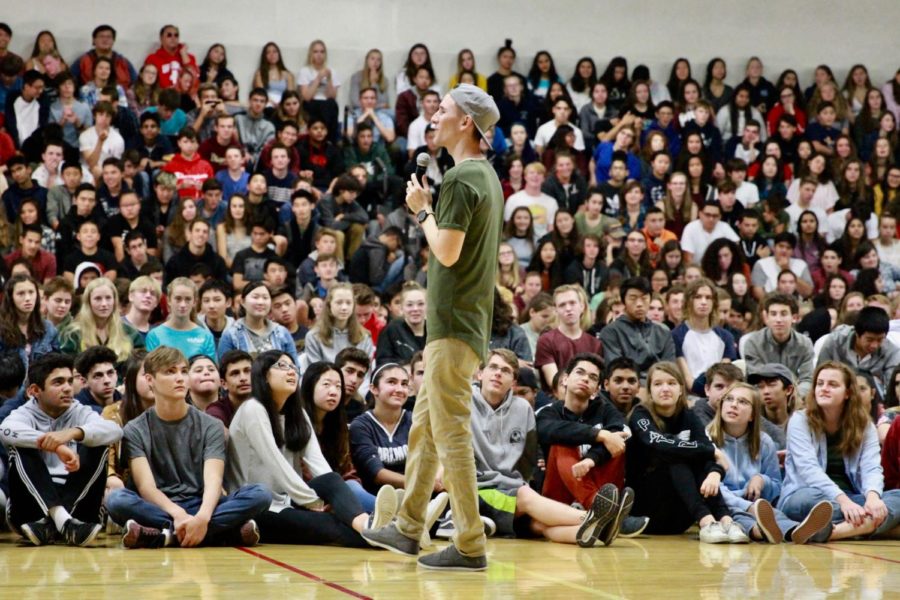 “One is to complain less and give more,” Backovich said. “The second is to use the things you love to help the people who need it.”

This year’s assembly is not Backovich’s first time at Carlmont High School. With a completely different batch of students, the motivational speaker spoke for Carlmont’s Welcome Back Assembly in 2014.

Four years later, Backovich has returned with a new set of messages for students.

“Things are always changing and evolving,” Backovich said. “It’s weird. My message used to never be one of hope and compassion until probably a few years back and I saw that there was a need for it in schools.”

He now emphasizes how important it is to give things to others. They can be gifts, like necklaces, but can also be things one can’t buy, like kindness. Backovich urged students to change their way of thinking — and instead of wondering why something isn’t right, to take that extra step to make a difference.

Although the message may be a relatively new part of Backovich’s repertoire, Principal Ralph Crame was pleased with the positivity. He expressed that the ideals will serve the Carlmont community well going into the year.

“Every year is different,” Crame said. “Every year has a different message. They’re all relevant and great messages. This one is another to move us along and make sure people are caring about each other.”

Backovich cracked jokes and encouraged students to give one another hand hugs and high fives. He spoke with an animated tone that encouraged smiles and laughter throughout the gymnasium.

The assembly inspired Iman Sarsour, a junior, who took Backovich’s words to heart.

“What he’s saying is really important, like about how it doesn’t matter what others think about you,” Sarsour said. “It’s important for us to be kind even at the expense of our reputation. Maybe doing what’s kind isn’t necessarily what’s cool, but at the end of the day, what matters is doing what’s right. I appreciate that.”

Moving forward, Sarsour expressed a desire to “give” more, as Backovich suggested.

Her newfound inspiration embodies the mentality that Backovich hoped to inspire throughout his talk — that students should never forget the good they can provide to others.

“The greatest things in life that we can give don’t cost a dime,” Backovich said. “They’re free. It is free for someone to give love or compassion. So, I think if we’re willing to give the things that maybe cost the most emotionally, it makes this school such an amazing place.”