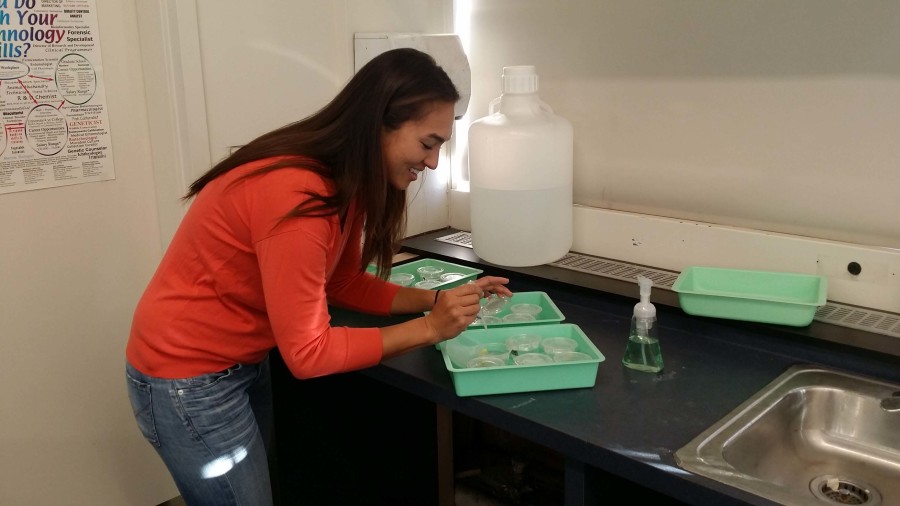 Alumni Stephanie Weden cleans up Biology materials at the end of her first period class.

Principal Ralph Crame said, “Ms. Weden, as a Carlmont grad, genuinely cares about the students she teaches. She is well organized and relates well with her students.”

Weden graduated from Carlmont in 2005 and was a swimmer and water polo player.

In the beginning of 2015, biology teacher Tina Smith took maternity leave and Weden became a long term substitute for some of the AP Biology classes.

Weden returned to Carlmont as an official teacher in the start the 2015-2016 school year.

“I teach one class of biology here and three at sequoia high school,” said Weden.

Carlmont had an extra section of Biology that needed to be covered and asked Weden to be the teacher because of her positive past experiences.

“I really love being back at Carlmont. I want to give back what Carlmont gave me many years ago,” said Weden.

Weden’s biology students only had good things to say about her.

Freshman Belal Shehadeh said, “She’s amazing, she’s my favorite teacher this year because she is really nice and she helps all her students with everything one step at a time.”

As an alumna at Carlmont high school, Weden knows how to teach the students in an effective way.

“I like how she is really patient with me because I ask a lot of questions and she doesn’t get annoyed like other teachers would,” said freshman Muaath Nofal.

Weden has many positive aspects that students in her class like about her.

“She is clear and easy going and I think those are a good trait that all teachers should have. I just want to say to Ms. Weden to keep doing what you are going and don’t change,” said Shehadeh.

Beyond just being a teacher, Weden is co-advising a club called DECA and assisting the Carlmont Swim Team as she did last year.