What’s the beef with eating meat? 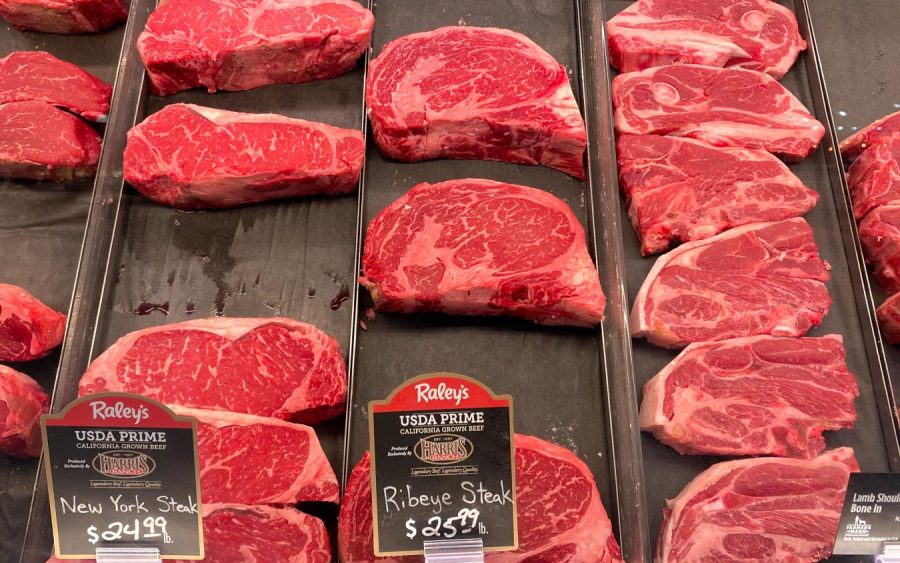 Meat consumption can cause a host of health issues and negatively impact the environment.

Heart disease, stroke, obesity, diabetes, and cancer. What do these all have in common? They are all the high-risk consequences of eating a meat-heavy diet.

The pendulum of reasons to be a vegetarian has changed from the traditional route. Nowadays, plant-based eating and vegetarianism are recognized as not only nutritionally sufficient but also as a way to promote a healthier lifestyle. According to the American Dietetic Association, “appropriately planned vegetarian diets, including total vegetarian or vegan diets, are healthful, nutritionally adequate, and may provide health benefits in the prevention and treatment of certain diseases.”
Health
In a recent study conducted by the Harvard School of Public Health, red meat was found to be a cause of shortened life. The study compared the statistical links between meat consumption and the cause of death.

Scientists documented 23,926 deaths, including 5,910 from heart disease and 9,364 from cancer, and there was an alarming association in the data between consumption of red meat and premature death.

“This study provides clear evidence that regular consumption of red meat, especially processed meat, contributes substantially to premature death,” said Dr. Frank Hu, a nutrition professor at Harvard School of Public Health and one of the senior scientists involved in the study.

Not only is Harvard advising people to cut down on meat consumption, but the World Cancer Research Fund is also warning people to limit their intake of red meats such as beef, lamb, and pork and avoid processed meat altogether. Consumption of red meat was found to increase the risk of bowel cancer.

Chicken was also proven to be cancerous. Researchers from Oxford University found chicken consumption associated with a higher risk of a type of blood cancer, non-Hodgkin lymphoma, and an increased chance of prostate cancer in men. 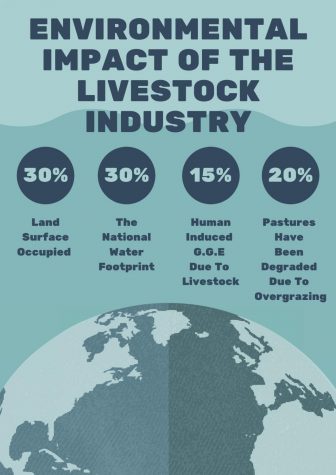 Julieanna Hever, a plant-based dietitian, highlights the overall benefits of a vegan diet in the long run.

“Without a doubt, veganism is steadily on the rise, growing daily with news of its vast advantages for human health, for the struggling and depleted planet, for the billions of animals that are needlessly tortured and slaughtered every year for food, as well as for many other remarkable reasons,” Hever said.

Hever’s statement underlining how veganism contributes to advantages for human health proves true, as large amounts of fat and cholesterol in red meat contribute to high percentages of cardiovascular diseases, which result in obesity.

Furthermore, it is not just the health aspect that meat affects. It is also the environment.
Environment
Livestock production is a major source of methane, which has a relatively high global warming potential.

The negative influence of livestock production contributes to greenhouse gas emissions, water footprint, water pollution, and water scarcity. Among agricultural practices, the livestock industry is a significant contributor to climate change, contributing between 12% and 18% to the total amount of emissions.

One reason for this high level of greenhouse gases is because cows, sheep, and larger livestock produce large quantities of methane as a byproduct of their digestive process, which relies on certain bacteria in their body to break down grasses. An article by United Nations found methane greenhouse gasses are 34 times more potent than CO2.

Transition
The negatives of meat consumption outweigh the benefits.

“Since becoming vegetarian, I noticed an overall improvement to my overall health. I feel fitter and have so much more energy now,” said junior Noe Foer.

Not only has following a vegetarian diet proved successful for Foer, but it also benefitted another Carlmont student.

“I became a vegetarian because I don’t believe in eating meat when you know the resources are not ethical. I couldn’t justify the thought of an animal dying for me to enjoy a meal when it wasn’t necessary, and I learned about how becoming vegetarian and reducing dairy consumption have positive impacts on your health and the environment,” said junior Abby Kizner.

Kizner talked about going back to following a vegetarian diet after eating meat for a year. There is no shame in failing the first time as a vegetarian and then diving back into the non-meat world. People are more likely to succeed again in a more vegetable-inclined diet after they relapse on meat.

When it comes to cutting out meat, the first step is simply reducing meat consumption.

As for nutrients, vegetarianism and veganism offer all the necessary protein, fats, carbohydrates, vitamins, and minerals for optimal health and are often higher in fiber and phytonutrients.

Trying out vegetarian and vegan meals is easy. It is as simple as looking up a recipe online or reading a recipe book.

With concerns about the environmental state of the planet and on top of that personal health, reducing or cutting out meat will be incredibly beneficial.

“I would encourage other people to try to eat less meat or go vegetarian if they can,” Kizner said. “It is better for the environment, better for your health, and not cruel to animals.”