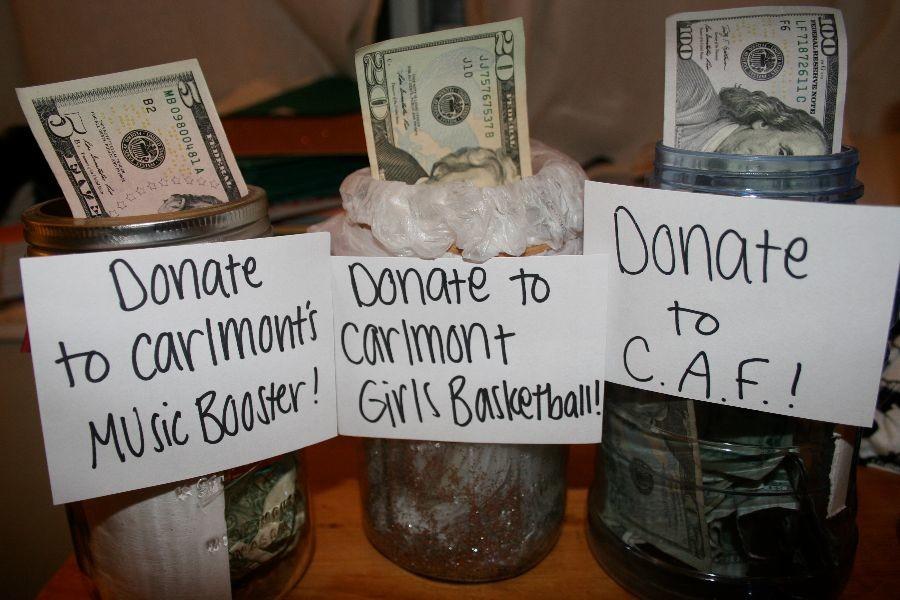 [Principal Lisa] Gleaton said, "We would be okay without [our fundraising groups], but we are great with them!"

Organizations on campus frequently ask students and parents to raise money. Some people have grown so accustomed to this practice that they often pitch in the requested amount without ever finding out where their money is going.

The district gives many of these organizations enough money to function at a basic level. Additional funds raised by students and parents are what allow these groups to thrive.

Senior and Jazz Ensemble member Christina Galisatus said, “The Carlmont Music Boosters’ (CMB) support is greatly appreciated! They do a lot for us and help us do a lot of things we may not otherwise be able to. The parents work really hard to make sure [we] have everything we need for a successful program.”

CMB has played a role in the award-winning program’s achievement. In 2014, Jazz Ensemble received unanimous superior scores at the California Music Educators Association Jazz Festival and at the Santa Cruz Festival.

In addition to providing a scholarship at the end of the year, “the boosters help fund our activities and plan the logistics involved. They help provide transportation to different festivals, organize fundraisers, and support our musical activities,” Galisatus said.

The groups relying on these extra funds are not limited to those in performing arts.

Last year the team generated $5,500 from its Free-Throw-A-Thon and an additional $700 from a car wash. The money raised paid for equipment, stipends for the assistant coaches, and awards for the team.

Because of California’s current drought, the team was unable to have a car wash this year. JV player and junior Teyva Chee said, “We’re making up for the fact that we can’t have a car wash by putting more effort into our other fundraisers. This year, we worked hard to get those extra donations and pledges for the Free-Throw-A-Thon. A lot of us raised over $300 or $400 individually.”

Players raised money by gathering flat donations as well as pledges for every shot made. After 100 free-throw attempts, players calculated their contributions.

Chee alone raised $350 for her team through this fundraising event.

Mori said, “Unlike the other schools I have coached at, Carlmont does not fund any stipends for our assistant coaches. We have to do that ourselves, so a major portion of what we raise goes to our assistant coaching stipends. Separately, the Carlmont Scots Sports Booster Club (CSSBC) has provided the funds for new uniforms.”

Over the past two years, both Mori’s varsity team and the JV team were able to purchase new uniforms.

“We would not be able to have our assistant coaches or provide many of the aforementioned nice things [equipment, awards, team clothes], if not for our fundraising efforts and the generosity of our donors,” Mori said.

According to the CAF website, “As a Basic Aid school district, Carlmont actually receives less funding in the new school funding formula, and due to our demographics, Carlmont receives less funding per pupil than any school in our district. If we want to maintain the programs that make our school unique, we can choose to fund them ourselves.”

Federal, state, and local funding adds up to roughly $8,800 per student annually.

Principal Lisa Gleaton said, “That funding [mainly] provides for staffing and some supplies to meet the costs of every student taking six classes for each of the four years of high school.”

According to Gleaton, students would be limited to six periods without CAF. They would also have fewer academic electives, supplies, and field trips.

“There would be much less teacher time to collaborate on instruction, teacher professional development, and innovation in the science classrooms (no new equipment or training). [Additionally], without the Parent Teacher Student Association (PTSA), there would be no PTSA scholarships, no practice SATs or ACTs, and no parent education with outside speakers,” Gleaton said.

Gleaton said, “We would be okay without [our fundraising groups], but we are great with them!”