Who is really at fault for mass shootings 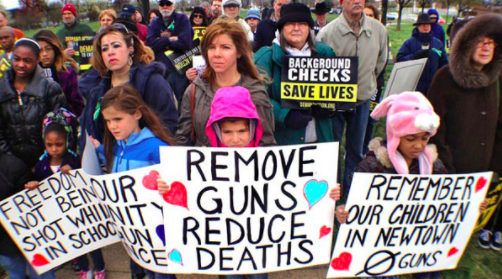 A group of people protesting following the Las Vegas massacre, that killed 50 and injured hundreds.

Valentine’s day. A day filled with hearts, joy, and lots of candy.

At least that is how the day should have gone for the residents of Parkland, Florida, a small town near Palm Beach County. Instead, Parkland’s local public school, Stoneman Douglas High School became the site of the ninth deadliest shooting in modern United States history.

On Feb. 14, Nikolas Cruz stormed the school armed with an AR-15 assault rifle, smoke grenades, and multiple magazines. After pulling the fire alarm himself to cause confusion, Cruz entered a classroom and began firing. After shooting in five classrooms, killing 17 and injuring at least 14 people, Cruz dropped his weapons, abandoned his gas mask, and attempted to flee the scene by blending in with the hundreds of other students running out of the school in horror. Cruz was eventually captured without incident, a little less than an hour later, after stopping at a local Subway and McDonald’s.

There is no reason for any civilian to have access to a semi-automatic rifle or a shotgun. Period.

Yes, civilians should be able to own handguns but American lawmakers must examine the way other countries gun controls law work and how successful their legislation regarding gun control has been.

In 1958, Japan introduced their gun control law and, according to an article by BBC Japan,  Japan had only had six gun deaths in 2014 compared to the United States’s 33, 599 deaths.

In order to buy a gun in Japan, you must attend an all-day class, take a written exam, and pass a shooting range test with a mark of at least 95 percent. You are also required to take a drug test and a mental wellness test. Your criminal record and any possible ties to extremist groups are also examined.

Japan is not the only country with gun control laws that have proven to be effective.

Following the 1996 Port Arthur massacre in Australia that killed 35 people and injured 25, all six Australian states passed gun laws banning semi-automatic rifles and shotguns. In conjunction with, the ban on semi-automatic rifles and shotguns, Australia requires 28-day waiting periods, thorough background checks, and requirements to prove a justifiable reason to own a gun. Since these gun control laws were enacted, Australia has not had any mass shootings.

Why won’t America follow suit when it is proven that stricter gun control laws work?

The answer is simple: the National Rifle Association (NRA).

The same senators that are given millions of dollars in funding by the NRA are the ones that constantly send their thoughts and prayers to victims of mass shootings, without giving any suggestions on how to reduce gun violence, making them complicit in the deaths of the hundreds.

The few NRA funded lawmakers that offer commentary besides the typical “thoughts and prayers” response are quick to claim that gun control laws would not have prevented these shootings, but would Cruz have done nearly as much damage with a knife? I don’t think so.

It is not like America has not tried an assault weapons ban in the past. In 1994, after a close vote of 52-48, the Federal Assault Weapons Ban was signed into office by the President Bill Clinton. During the ten years the ban was in effect, there was only one mass shooting where ten or more people were killed, the Columbine High School massacre.

Some critics of the ban have tried to use the Columbine massacre as the reason not to pass similar legislation ever again, but since the ban ended in 2004 there have been at least 14 mass shootings that killed ten or more people, and don’t forget the hundreds of other mass shootings that have killed fewer than ten people.

In order to deflect from the reality of the effectiveness of the Federal Assault Weapons Ban on reducing mass shootings, some lawmakers have begun to blame mental illness on mass shootings.

In an official statement by President Donald Trump, he claimed that in order to reduce gun violence in schools we must tackle the difficult issue of mental health.

Mental illness and mass shootings are unrelated. Of course, someone can have struggled with their mental health and kill someone, but the two do not directly correlate.

Adam Lanza, who killed 20 first graders and six adults at Sandy Hook Elementary School in 2012, had received therapy for numerous years before his shooting rampage. Psychologists determined he had Asperger’s syndrome, a syndrome that does not suggest violent behavior.

So, stop falling back on blaming mass shootings on mental illness and look at the facts: Nikolas Cruz could legally purchase an AR-15 semi-automatic rifle, but he could not legally buy a beer.