Will the Golden State be the next Green State by legalizing marijuana? 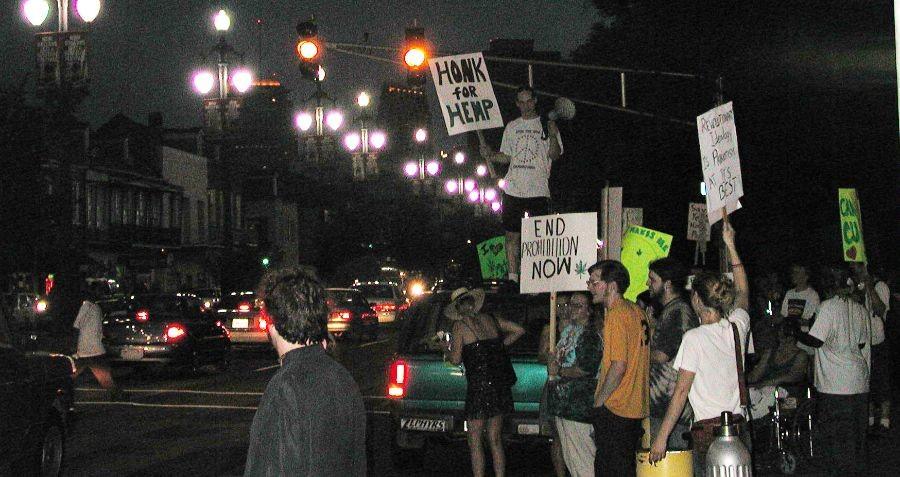 Febreeze and eye drops are a stoner’s best friend. Without them, you could land yourself in the back of a police car at any moment, and your whole future could evaporate in the time it takes to spark up a joint.

For California citizens, however, these protective measures may soon be no more than a hazy memory of the past.

For the new marijuana legalization proposition to appear on the ballot, a simple majority in 2016 is needed.

In 1996, “The Golden State” set a new precedent by becoming the first state in the nation to legalize medical marijuana use.

These states are acting as a trial run for possible changes in federal classification of marijuana as a Schedule 1 drug, which is defined by the Controlled Substance Act of 1973 as a dangerous substance that has no recognized medical use and that has a high potential for abuse.

A commonly forgotten fact is that any state sanctioning the sale of marijuana, medical or otherwise, is acting in defiance of the federal government.

This disagreement in public policy is a political grey area, reflective of changing tides in our increasingly progressive society.

“Smoking weed doesn’t hurt the good of society at all,” said senior Morgan Manter, who has never taken a puff in her life.

Twenty years after medical marijuana was legalized, California may expect to be the newest “Green State” following the 2016 presidential elections, when activists for legalization anticipate a favorable outcome because of the tidal wave of new weed-savvy millenniums who will be eligible to vote.

“As newer generations come into being the adults of the world, the social stigma will go away because it’s just an outdated concept that older generations can’t let go of,” said Manter.

California Attorney General Kamala Harris expressed her view that there is a “certain inevitability,” about the legalization of recreational weed, according to the Huffington Post.

Harris added that she has no moral objections to the proposition, but that it should be left to the voters to decide.

“Every state wants something different, so each should vote for itself on this issue, instead of following the federal governments umbrella of drug regulation,” said Manter.

Mixed messages are coming from Sacramento, however, considering that Lieutenant Governor Gavin Newsom announced his intended endorsement of a legalization ballot measure in 2016, while Governor Jerry Brown remains unenthused by the idea of legal pot.

Since California led the initiative for not only legalizing medical marijuana, but also for the decriminalization of possession charges for less than one ounce, many citizens were surprised when the proposal for recreational use failed in 2010.

When a legalization measure was first proposed in 1972, it failed with 33.5 percent of voters saying “Yes.”

“Generations of the past were more influenced by religion, the rules and laws they’ve had for years, and they don’t like change,” said Manter, explaining her theory on why support for a legalization proposition has increased substantially throughout the decades.

While the previous attempts did not succeed in legalizing recreational marijuana, the third time may prove to be the charm for California voters in 2016, according to new poll numbers from The Field Poll and The Public Polling Institute of California, showing for the first time a 55 percent majority in favor of legalizing it, The Huffington Post reported.

“Debating about whether to legalize now is pointless, because we’re going to,” said University of California, Los Angeles professor and drug policy expert, Mark A.R. Kleiman to Inside Bay Area.

If California does become the next state to legalize, none will be more affected than northern California.

Humboldt County in Eureka, California is the marijuana capital of America. According to The Daily Beast, Eureka is the number one pot smoking city in the United States, and the San Francisco Bay Area is the fifth.

“People have never cared if weed is legal or not, they get their hands on it regardless. And if they are going to use it anyways, we might as well get benefits from it with taxes and make it safer with regulation,” said Manter.

Not everyone in the state is prepared to legalize, however.

Even with the latest poll results, Californians are still torn by a margin not big enough to rely on.

“Marijuana should only be legal for medical reasons as prescribed by a doctor,” said junior Kevin Garay.

Garay warned that legalization could just become an inventory for the black market.

Colorado state officials have acknowledged similar concerns with their own growing dispensary market, admitting that their greatest fear is seeing state sanctioned marijuana falling into the hands of kids.

If California were to legalize recreational pot in the 2016 presidential election, Attorney General Harris said the government would plan the new legislation based off existing laws in legalized states such as Colorado and Washington.

While lucky to have examples already leading the way in marijuana legislation, the proposition is by no means a slam dunk for activists.

“I’m not even sure it’ll happen in 2016, but I expect weed to be legalized within a few years,” said Manter.