Witchcraft through the ages 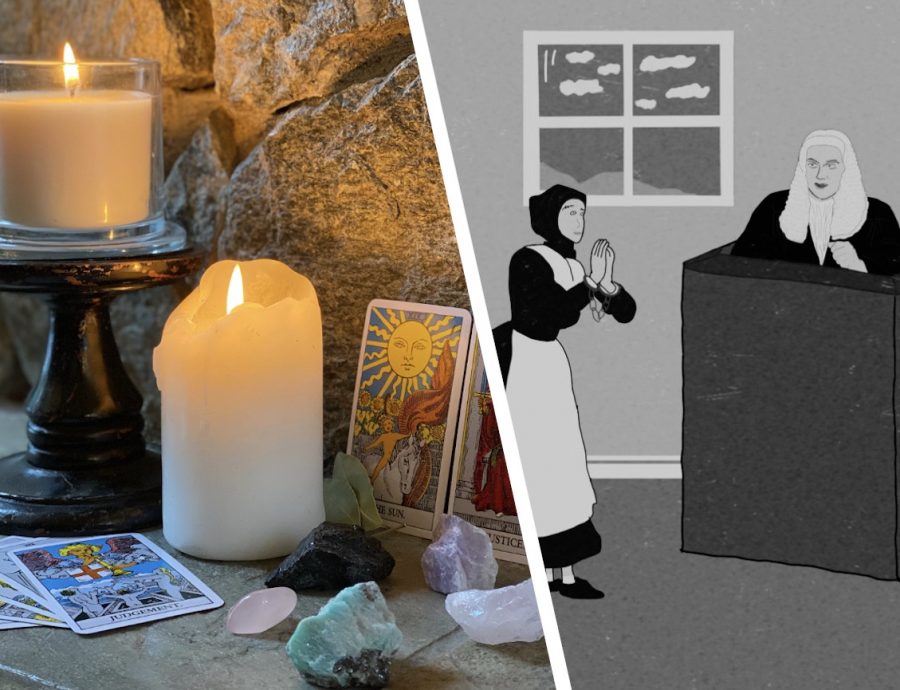 Many people think of witchcraft today as a spiritual practice. This was not always the case.

Since the 14th century, this portrayal of witches has been pushed upon society. It was this narrative that led to thousands of accusations and executions of those put to trial for witchcraft.

None of it was based on fact.

While today, most of society sees that witchcraft, witches, and their relation to pagan religions have nothing sinister to them, this was not always the case. With more widespread knowledge on the topic, it is now easier for people to come to their own conclusions.

The earliest records of witches are from the Hebrew Bible. In 1 Samuel 28:3-15, a story is told of a king who sought the Witch of Endor. The king sought this woman in hopes of summoning a dead prophet’s spirit. Another reference comes from Exodus 22:18, which can be translated to, “thou shalt not suffer a witch to live.”

“Malleus Maleficarum” is a book originally written in Latin and published in 1487. “Malleus Maleficarum” translates to “The Hammer of Witches” in English. This witch-hunting guide became the second best-selling book in Europe for almost two centuries, right behind the Bible.

In the 16th and 17th centuries, many people used this book as a guide to identifying, hunting, and interrogating witches. Most believe it is to blame for the virality of witch mania. “Malleus Maleficarum” labeled witchcraft as heresy; the book prompted some Protestants and Catholics to pursue and torture the people they classified as witches.

Following the release of “Malleus Maleficarum,” witch hunts became more and more common. Most who were accused of being witches confessed under torture. Some were executed, burned alive, or hanged. Widows, single women, and other marginalized women were often targeted.

Teena Fultz, the manager of The Sword and Rose, a spiritual and metaphysical shop located in San Francisco, has seen the effect these false portrayals can create. Rather than causing conflict, Fultz prefers not to engage with those who might provide backlash to her practices.

“A lot of it comes from misunderstanding, and again the fear aspect. If people are afraid of something, as they belittle it, they feel less afraid of it, or they don’t believe in it. Honestly, for myself, I just don’t engage in that. That is your belief, and not believing is still believing,” Fultz said.

Back in 1692, there began a spread of witch hysteria throughout the New World in Salem, Massachusetts.

The first Salem witch trial has been said to be that of Sarah Good, Sarah Osborne, and Tituba, an enslaved Native woman. Suspicion sprouted when 9-year-old Elizabeth Parris and 11-year-old Abigail Williams began feeling ill. The girls would make strange sounds, suffer from body contortions, and demonstrate other odd symptoms; it is now believed that this stemmed from poisoning by fungus.

At the time, Good, Osborne, and Tituba were blamed for the girls’ suffering and interrogated for the use of witchcraft. None of the three had husbands, which may have made them more of a target.

Bridget Bishop was the first accused witch to be put to death during the Salem witch trials. She was hanged at the Salem Gallows.

In Connecticut, the final witch trial took place in 1697. In total, 11 women were put to death in the state.

In Virginia, however, citizens were less frantic about witches. Lower Norfolk County passed a law in 1655 making it a crime to falsely accuse someone of witchcraft. False accusers would pay a fine of 1,000 pounds of tobacco, along with further punishment if the court deemed it necessary. However, witchcraft was still a concern; about two dozen witch trials took place in Virginia from 1626-1730.

Women were not the only victims of the Salem witch trials — six men and two dogs also lost their lives.

Today, witches still face persecution and death, although not on quite the same scale.

Just a few years ago in Papua New Guinea, a young mother was burned alive after being suspected of witchcraft. Throughout the year 2017, there have been reports of attacks on those accused of witchcraft in five different countries: Angola, Central African Republic, Lesotho, Liberia, and South Africa.

In Fultz’s experience, it is clear that fear can cloud society’s view of witchcraft and magic.

“I think when people start dealing with magic in the sense of it as a power, it’s pretty much using the elements of the universe. If you use them incorrectly, sometimes, there can be backlash, and people become afraid of that. That fear can cloud their vision around it,” Fultz said.

In sophomore Olivia Sam’s opinion, everyone deserves respect when it comes to their beliefs.

“I think that witchcraft can be viewed as just another spiritual practice…people should try not to be too critical of it and respect it in the same way you would respect someone’s religion or beliefs,” Sam said.

Wicca, a religion practiced by many who perform witchcraft, is recognized as an official religion in the U.S. However, the recognition of Wiccan holidays varies in each state.

For Fultz, Wicca was one of her first steps on a journey with spirituality.

“I kind of got my hands on anything I could, Wicca was an easy one to get because there are a lot of books on it. I just started searching, and it was honestly finding The Sword and Rose, talking with the owner, and picking his brain that led me down the path that makes the most sense for me,” Fultz said.

Fultz describes herself as a Qabalistic Hermetic witch. She was first led on this journey after having a profound spiritual experience at 16 years old.

“Honestly, I should not be alive; in that experience, it kind of led me to start questioning. Maybe there is actually more to life than what is going on…I did have a lot of Christian background, but I knew that wasn’t quite where I fit in with spirituality,” Fultz said.

Wicca, the Neopagan religion, is not the only path to take in the world of witchcraft, witches, and their relation in faith. Today, anyone can join the community; some do in religious affiliation, political involvement, health reasons, and many other reasons.

Witchcraft is a practice, meaning it does not have to fit into religious circumstances. Witchcraft can include practicing spells and incantations, amongst many other methods. There is no one correct way to practice or be a witch.

Given the many different paths people take, Fultz feels it’s important not to dwell on how you got to your place in spirituality but to focus on the world right for you.

“It’s not necessarily how you get there, but the important part is figuring out where you do fall and what your path is…There are so many different worlds that people come to,” Fultz said.

Fultz’s advice to those looking to lead this way with their spirituality is to read, study, and think about what is best for you specifically. She emphasizes the importance of your own thoughts while recognizing the validity of others’ beliefs.

In most of the world today, witchcraft and witches are no longer seen as evil or dangerous, but they are still commonly misunderstood. It takes research, studying, and an open mind to fully understand witchcraft and all it entails.