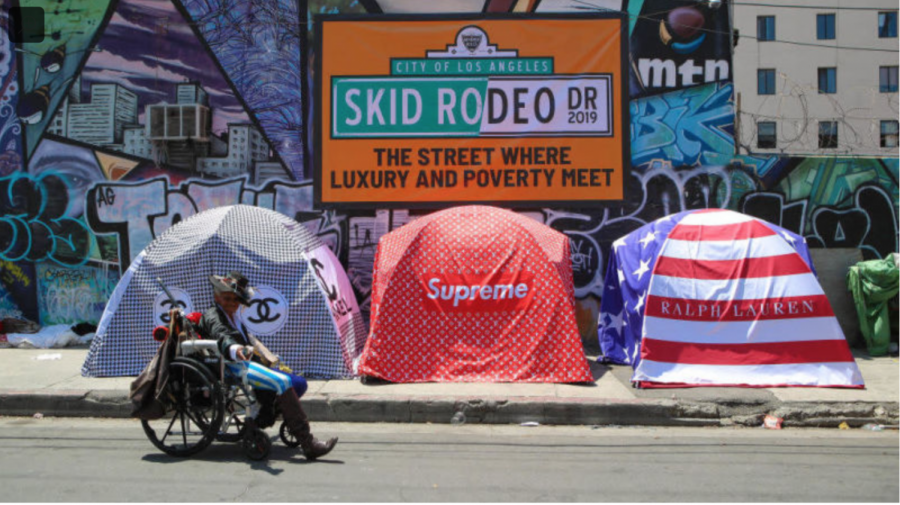 A woman supports the helpless on the overpopulated street of Skid-Row.

The streets are empty. Since the COVID-19 epidemic hit the world, everyone is quarantining in their homes.

However, the population of the homeless are forgotten. Having no place to stay or a proper support system, these individuals suffer from no income.

Considering this situation, many are donating and finding strategies to aid the less fortunate.

Outside of a Trader Joe’s located in San Mateo, California, a middle-aged homeless man sat outside on his wheelchair, watching as people go into the store five at a time. His price range doesn’t expand enough for him to be able to shop at Trader Joe’s or even rent an apartment, leaving him sitting outside for most hours of the day.

“I have been on the streets for some time now. I don’t really have much motivation in me to do much other than just sit, and there is not much that I can do after I got into a car accident while being under the influence, leaving me paralyzed and not being in the right shape to work,” said Joseph Wells, a poverty-stricken man. “It has been a little over a few years since I have gotten into that accident, but I still suffer from the consequences.”

Shaina Raines is doing a kind act by providing the needy with sanitary products and meals, distributing these in a plastic bag from her car. Raines is familiar with helping the people on the streets, as it is a collective action she goes after.

“I think what this woman did was very noble. She helped out the needy who need help during this situation because they are more exposed to the virus and could be one of the main ways of spreading the virus. This woman is helping out and protecting people who can’t protect themselves because they might be suffering mentally,” said Gulnar Babayeva, an OB-GYN.

Raines manages to utilize the method of social distancing while giving out the products in a plastic bag from her car. Raines begins her drive-in service on Skid Row, where the population of homeless surpasses 2,000.

Even though the street needs a kind person helping the homeless, some disagree with Raines.

“Of course, it is a positive thing to help people, and I love helping people too. But I think instead of giving them supplies I prefer to give money because in this situation, it is very dangerous to give somebody something because of the virus. You should protect not only yourself but other people too, but this virus can be spread without even knowing from money or different items. Putting this virus aside, some may have unknown allergies as well,” said Firuza Abbasova, a public relations student and a political activist. “Every time I see a person on the streets, I try to help them in the best way possible.”