A day without women

On International Women's Day, women in Mexico took to the streets to strike against femicides. 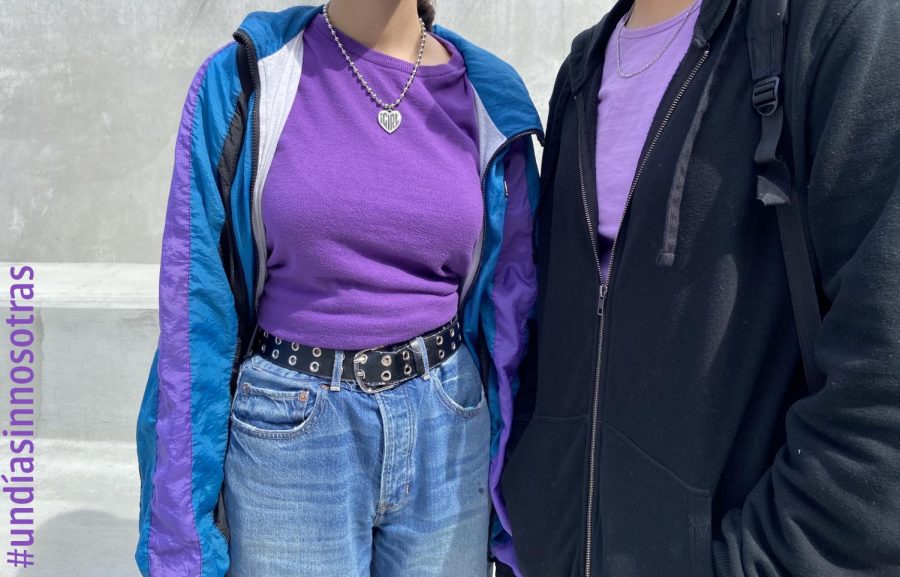 Victoria and Maria Valle Remond wear purple in support of the #undíasinnosotras strikes in Mexico.

Fátima Cecilia Aldrighetti had been standing outside her school in Mexico City, waiting to be picked up by her mother, who was running late. When her mother finally arrived, she was nowhere to be seen. The last sighting of the girl was on video surveillance, leaving the school with a woman that was not her mother.

Four days passed, and still, no one had seen or heard from Aldrighetti until a body was found wrapped in a garbage bag and abandoned in a rural area. The body, with signs of abuse and torture, was identified to be the seven-year-old girl.

News of her brutal murder quickly sparked outrage. A landlord tipped off a police officer about a woman who matched the description of the suspect and fled her apartment a day before the body was found. Upon further investigation, police were able to find Aldrighetti’s clothing and make arrests.

However, the authorities were criticized for handling the case poorly. Hundreds of thousands of people began tweeting the hashtag #JusticiaParaFatima in response.

“Fátima is not with us because the protocols were not followed because the institutions did not give it the attention they should have,” said the girl’s aunt, Sonia López, in an interview with BBC News.

Aldrighetti’s murder follows a week after 25-year-old Ingrid Escamilla’s body was found in her own home. A 46-year-old man was covered in her blood. According to CNN, he had told the police at the time that he had stabbed her and attempted to dispose of her body.

When pictures of Escamilla’s murdered body were leaked to the front pages of media, women’s rights advocates assembled to stand against femicides, or the sex-based killings of women.

On March 8, women took to the streets of Mexico City to stand against the femicides and treatment of the cases. This was the beginning of the 2-day strike for women’s rights and equality; the first day was a march through the streets, while March 9 was a day without women.

“The whole city went purple with us, even the Jacaranda trees. Every spray painting, broken window, fire lit, and song chanted ignited our movement and purpose. We finally were able to tell the truth that the media often twists against us,” said Sofía*, a teenager in Mexico.

According to Sofía, women arrived in groups under the threat of violence from the authorities or counter-protests.

“I felt safer walking beside women with pepper spray and hammers than what I feel on a day-to-day basis. I could feel the love from every single woman there, and I was moved by the families of murdered girls and victims of abuse marching alongside us,” Sofía said.

With “un día sin mujeres,” or a day without women, protesters amplified their message. Advocates hoped that if enough women participated and stayed home from work or school, the government would hear their calls.

Mercer, a research firm in Mexico City, conducted a survey and discovered that 63% of business organizations in Mexico supported the one-day strike. According to Concanaco Servytur, if all of the women working in the companies stayed home, it could cost the economy $1.37 billion.

The protests even reached outside of Mexico.

“My sister and I were born in Mexico, and we lived there until I was five. We were lucky enough to get out of there and find a better life, but the reality is that if we had stayed, we could have been one of the many women who have gone missing or been killed at the hands of men,” Maria Valle Remond said.

For the entire day, Victoria and Maria Valle Remond were off of social media and did not respond to messages.

“If I was still in Mexico, I would be at every protest standing up for my rights as a human, but I do my best to participate here for the women that are brave enough to step out of their house every day knowing there’s a chance they won’t come back,” Maria Valle Remond said.

Victoria Valle Remond believes that it’s her responsibility to speak for those whose voices are unheard and make others aware of the strike in Mexico.

“There are countless things I can do because I live here and not in Mexico. I can walk alone with little worry, or stand to wait for a bus alone, which is a luxury that many girls my age will never get,” Victoria Valle Remond said.

Others took to Instagram, uniting the front among those in and out of Mexico to participate in the movement. The #undiasinmujeres or #undíasinnosotras has taken Instagram by storm, with over 50,000 posts between them.

“It’s important for feminists around the world to recognize the other movements that are taking place around them because none of us are fighting this battle alone,” Sofía said.

*name has been changed to protect the identity of the speaker.