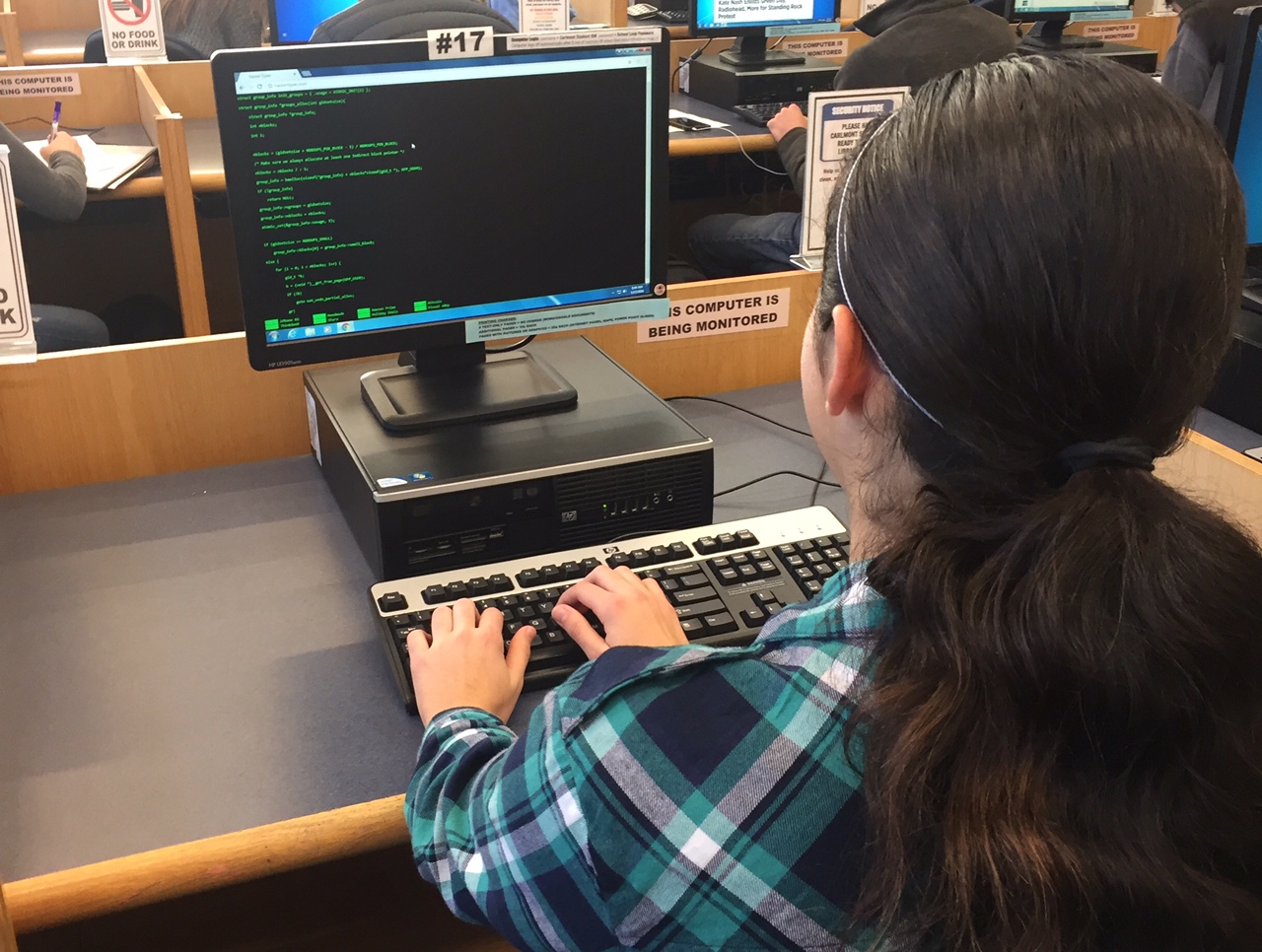 Sophomore Samantha Tolu like many others, is heavily interested in STEM and technology. Tolu said, “I personally really enjoy computer science and tech. I think it’s really cool that women are now getting more involved in the technology industry because they allow for everyone’s voices to be heard.”

She spent the past week preparing for her interview.

She would never have imagined that one of the questions would be, “Would you want to go on a date with me?”

During an interview for an engineering job, college student Sharon Roy, who is pursuing a computer science major, was asked out on a date by the male interviewer.

“This is never okay, but I guess people think it’s okay because I’m a girl,” Roy said.

Stereotypes and discrimination against women in the technology field still linger, whether it’s subtle comments or blunt negativity.

Co-captain of the Robotics team Ana Tudor, a senior, said, “Stereotypes [about women in technology] affect the field of tech really negatively. It does women a disservice when they grow up with the idea that tech is not something they can do. Then, they feel like it is something that they can never do, even if they find it really interesting. It inhibits potential.”

According to the Huffington Post, women working in STEM fields are 45 percent more likely to leave the industry than their male peers. In another research study by Girl Scouts of America, only 13 percent of female teens say STEM-related careers would be their first choice.

The gender gap and gender bias in technology persist as young women are still discouraged from pursuing these passions. While women have made immense progress in the industry, they remain the minority. Misconceptions revolving around technology are prevalent and affect young girls who express interest.

Harvey Mudd College President Maria Klawe explained that girls don’t go into technology because they are influenced by these stereotypes.

When girls are surrounded by misconceptions about technology growing up, they may have a fixed mindset around these ideas and feel discouraged. Others may simply not consider it as part of their future.

“The stereotype is that people involved with tech are really nerdy, like guys who sit in front of a computer in their dark basement. People have this perception that you have to be a genius, but you really don’t,” said Girls Who Code Club President Emily Wong, a senior planning on majoring in computer science. “Tech is somewhat easy to get into, and it can help a lot of people, which I think is really inspiring.”

In a Yale University study, researchers asked more than 100 science faculty at academic institutions nationally to evaluate one of two student resumes. They were exactly identical, but one part differed — the student’s name was either John or Jennifer. Despite having the same qualifications, the faculty perceived John as more competent, offering him a higher salary and more mentoring than Jennifer.

Lingering stereotypes, such as these, remain in the industry and create barriers for women trying to become more involved in technology.

However, Voldstad is optimistic about the future of women in technology, as she already sees the next generation of women working to overcome these challenges.

“I think someday we’ll get past this point, so there will be a larger number women working in technology and it’ll become more comfortable as they will no longer be the minority,” Voldstad said.

Since the industry is predominantly male, companies now aim to diversify their workplace with many advocates for gender equality in technology.

Technology leaders, such as Salesforce billionaire Marc Benioff, are now further emphasizing closing the gender gap and viewing equality as a business priority. Salesforce has a policy ratio 1-to-1-to-1, in which they leverage one percent of the company’s technology, resources, and people to make a change. They hope to have more women involved in the near future.

Women, despite discouragement, continue to empower themselves to break the “glass ceiling.”

Recently, Grace Hopper and Margaret H. Hamilton were recognized by President Barack Obama as recipients of the Presidential Medal of Freedom.

Hopper was one of the first programmers and is often referred to as the “mother of computing.” Hamilton is a computer scientist, systems engineer, and business owner who helped develop software for NASA. Both women defied society to pursue technology and succeeded.

Even though many have faced challenges, women have persevered through, not letting their surroundings stop them.

Roy said, “Technology is, fortunately, something that anyone can be successful in as long as they are passionate.”

Locally, students are working to make a difference and create safe environments to facilitate a technology community, hoping to get more women involved.

Tudor, Wong, and many other students and advisers have made numerous contributions to improving the number of women involved in technology at Carlmont.

“I ended up taking a risk and finding out that technology was really cool. Thankfully, Carlmont is a really accepting place,” Tutor said.