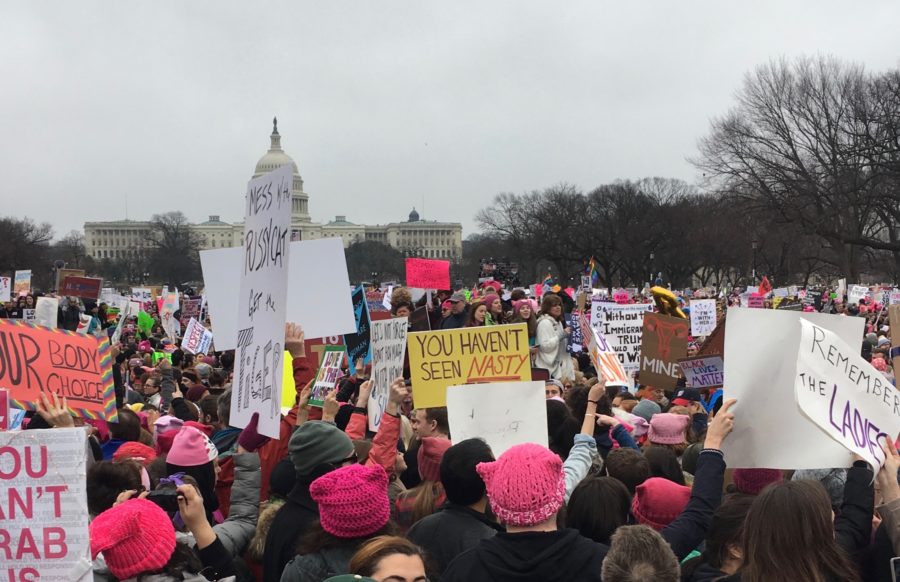 A sea of pink-eared hats stretched down the endless blocks of the nation’s capital, representing the desperation for equality. A roar erupted from the crowd as they charged forward, pouring down every street of D.C., marching and chanting in sync as one unit.

On Jan 21, over 5 million people around the world marched in support of the rights of women, minorities, and diversity in America. The original march that inspired so many sister protests was located in Washington D.C., where an estimated 700,000 to 1 million people attended.

Chants, both witty and powerful, were called out, pouring from the passionate pipes of the million people who attended.

Claudia Rosen, a veteran marcher who attended the Women’s March on Washington said, “It was cathartic and empowering. The marchers were funny and positive. I felt a part of something much bigger than myself — something grounded in what is unequivocally right for our country.”

Many people marched to feel love, support, and to voice their opinions, which created a bond between the like-minded marchers.

One marcher, sophomore Kaylie Moropoulos said, “There was the presence of absolute trust in one another that was definitely a change from the divided and tension-filled environment we currently live in.”

“Where do we go from here?” Many have asked after voicing their opinion in the marches.

Rosen said, “What follows the march is critical, too, with relentless calls and petitions to members of Congress regarding their stands.”

The protests that follow and the small actions taken at home are just as important as the Women’s March. One event, no matter how massive, doesn’t fix a nation’s problems overnight.

Both Moropoulos and Rosen say they plan to write postcards and make calls to local senators and representatives voicing their concerns and fighting for their rights.

Sophomore Madeline Standlee, who attended the Women’s March in Oakland, said, “I intend to continue to attend protests, and aid any groups that are struggling under new laws. When legal immigrants were detained in airports weeks ago some of my friends went to protest and support those people by giving them a voice, and I plan on doing things similar to this as our new president moves forward with his plans.”

Protests surrounding the Muslim ban have recently shut down various airports, as frustrated citizens continue to voice their beliefs.

Continuing to march, protest, call, and write is what will create change.

“We can make the change we want to see in our own lives and people can and will fight for what they believe in because in the U.S. we believe in ourselves and the diversity that makes us an inclusive democracy,” said Standlee.

The Women’s Marches around the world were just another step on the long and treacherous road to equality in the United States.