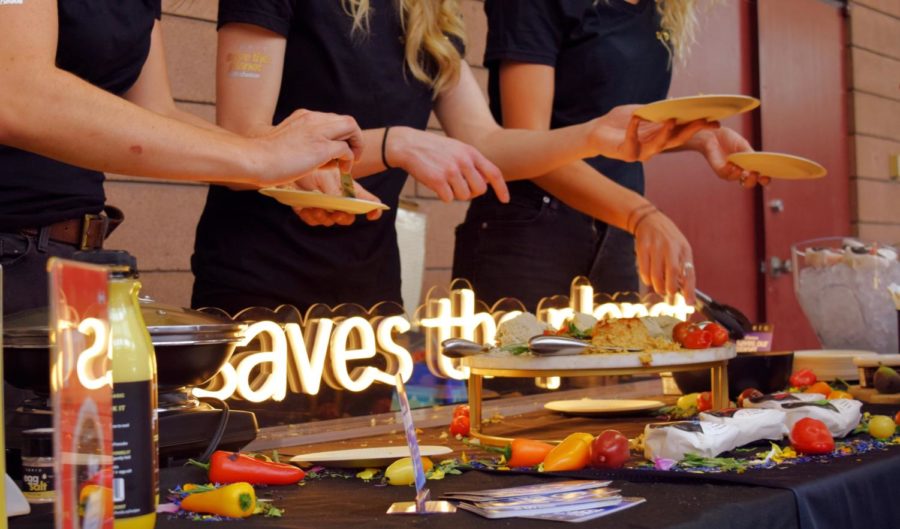 A booth at the festival serves attendees samples of their vegan food.

Rooted in guidance and education for healthy living, the 20th Annual World Vegetable Festival offered a variety of plant-based foods along with a fun and tasty atmosphere.

The festival inspired attendees to lead environmentally-friendly lives by providing them with plenty of vegan snacks and meals, great speakers, and display booths hosted by impactful organizations.

For many, the event was about more than just the food.

“It was cool to get connected with a few activists in the area. I also really enjoyed the opportunity to get to know more people around here,” said Janine Morris, an activist from Canada and enthusiastic attendee.

The San Francisco Veg Society, a nonprofit organization created to promote a healthier lifestyle, hosted the event in hopes of creating a welcoming environment where people could gain a new understanding of veganism and its benefits.

The host organization facilitated an easy-going, laid back atmosphere that brought together a group of people who were interested in learning about similar issues.

“I think that being plant-based has been one of the best things I could have ever done for myself and for the world. To be around like-minded folks who believe in the message and are just there for sustainability is great,” said Leah Sachs, the co-founder of Slices of Citrus and a vendor at the festival.

Slices of Citrus, which promotes sustainable fashion, was one of the many booths available at the festival. Similarly, other booths promoted their own organizations that supported the plant-based movement.

Along with inspiring attendees to live a mindful lifestyle, the event educated them on how a vegan diet could contribute to reducing animal cruelty and help save the environment.

The Factory Farming Awareness Coalition (FFAC), another organization featured at the festival, encourages students to be involved and learn about serious issues.

“Our mission is education. We spread awareness about how people’s dietary choices impact the environment, social justice, animal welfare, and public health,” said high school student Francesca Dawson, a representative of the FFAC.

FFAC’s current project, the Green Monday initiative, is all about inspiring a routine, portion, and impact-based diet at least once a week. Their goal is to encourage progress towards a sustainable lifestyle and reduce the carbon footprint created by many foods.

The event created a space for organizations like these to exchange their ideas and bring awareness to their movements.

“The people, community, and food are really what makes events like these so great. And of course, I don’t mind the plenty of amazing sales either,” said Ashley Merz, who hosted The Source Zero booth at the festival.

The Source Zero is a local shop that sells plastic-free alternatives to everyday items such as wooden spoons or metal straws.

Through spreading the message on the power of food choices, the festival connected a community of people that were loyal to the cause and fully open to new ideas. The satisfied festival-goers left the event with full stomachs, smiles on their faces, and more conscious minds.