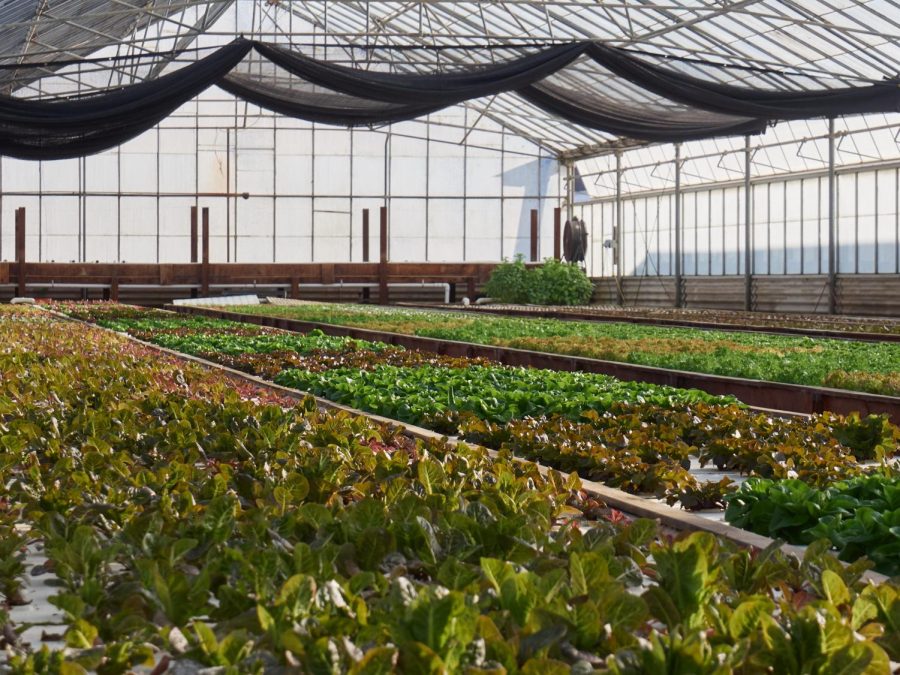 Ouroboros Farms, the aquaponics farm located in Half Moon Bay, California. Fish tanks circulate 9,000 gallons of water out through neighboring “raft beds,” holding frames with sprouting greens whose roots are suspended in water, and through “medium beds,” which use clay pebbles to filter and disperse water for the produce.

Aquaponics: An urge to rethink

That’s all it took for Ken Armstrong to start up his chain of aquaponics farms.

Inspired by the transformation of food production described in an interview with Will Allen, a MacArthur Grant-winning urban farmer in Milwaukee, Armstrong became increasingly interested and determined to take action.

After coming into an inheritance at 42, he decided to invest all his money into this new project, naming it Ouroboros — the symbol of the snake eating its tail — to symbolize infinity and the idea of how energy from one life form can transfer to another, the reasoning behind aquaponics.

Are fish the savior of the planet?

The urge to rethink water usage is greater than ever, with a global crisis of water waste upon humanity. One-fifth of the world’s population lacks safe drinking water, a result of mismanagement of resources. One of the ways to start thinking about the overall water footprint of humans is through a simple fact — gardening.

Agriculture accounts for 70% of the water consumed around the world. It uses more water than any other source and wastes much of it due to inefficiencies.

Multiple factors result in the daily loss of water through gardening, especially evaporation. This is mainly the result of using soil, which keeps water close to the surface, drying out the water and encouraging gardeners to use more to keep their plants alive.

While there are multiple types of sustainable gardens that use less water, like rooftop and rain gardens, the form that uses no soil at all could possibly save the most water is aquaponic gardening.

Aquaponic gardening is the system that combines conventional aquaculture with hydroponics in a symbiotic environment. In other words, aquaponics puts fish in charge of growing plants. Aquaponics mimics a natural ecosystem, representing the relationship between water, aquatic life, bacteria, nutrient dynamics, and plants.

What is aquaponics? by Katherine Tsvirkunova

How does aquaponics work?

Aquaponics uses aquaculture and hydroponics in a symbiotic combination where fish, plants, and beneficial bacteria rely on each other to live.

The main input to this system is fish food. The fish eat the food and excrete waste, more than 50% of which is in the form of ammonia. The ammonia is then secreted in the urine and gills. The remainder of the fish waste goes through a process called mineralization, which occurs when heterotrophic bacteria consume fish waste and convert it to ammonia and other compounds.

Nitrifying bacteria, which live in the soil, water, and air, convert the ammonia into nitrates that the plants can consume. In removing the nutrients provided by the bacteria through plant growth, the plants help to clean the water the fish live in.

In this cycle, aquaponics gives hope to sustainable organic crop production, aquaculture, and water consumption. Fish waste is recycled and used for plant growth instead of being thrown into the ocean. Water is recirculated in a closed system, lowering the amount of water consumed.

Founded in 2012, Ouroboros Farms, located in Half Moon Bay, California, is now one of the largest commercial aquaponic farms in the U.S.

Before starting his operation, Armstrong was the production and inventory manager for Earthbath Natural Pet Care Products and a practitioner of “Quantum Healing Hypnosis Therapy.”

“I wanted to put my money where my ethics are and create a business model that people could replicate and understand where our food comes from,” Armstrong said in an article for Capital Press, an agricultural newspaper covering the West Coast of the U.S.

After spending a year researching aquaponics and attending a four-day training session in Florida, Armstrong had all the materials needed to start and run his own business.

His partner, Jessica Patton, the “plant whisperer” and community relations expert of Ouroboros Farms, is a native Californian with 13 years of experience working with plants and herbs. With many years of experience gardening both indoors and outdoors, Patton has experimented using various forms of growing. She has years of hydroponic experience and has previously lived on a self-sustainable farm for many years.

Together, Armstrong and Patton run Ouroboros Farms selling produce at their farm stand, online, or at many local Bay Area restaurants. They also provide public and private tours of the farm, along with a full range of classes for everyone from beginners and hobbyists to commercial growers.

Retail manager Dorian Guerrazzi, 27, helps with the retail space on Ouroboros Farms and assists anybody interested in harvesting, fish, or sales. He spends his weekends on the farm with colleague Tommy J* explaining the meaning and purpose of aquaponic culture to visitors.

“The Zen nature of having fish in a farm is just really calming and comfortable. It’s lighter work than a traditional farm, where you have a lot of manual labor. An aquaponic farm is very ergonomic for the person,” Guerrazzi said.

J is a funder of Ouroboros Farms. As a funder, he put all his patents on the line to help raise money for the farm. He moved from Del Mar to support the cause of Ouroboros after recently retiring and used to run a cosmetics company, producing hundreds of skincare products.

Now 60 years old, J helps out on the weekends with his son and produces skincare formulas for Ouroboros Farms.

J said his goal is to fund education about aquaponics around the world and to fund more types of facilities like Ouroboros Farms.

Aquaponic techniques have been used since the Aztecs, where cultivated agricultural islands known as chinampas were used to grow plants in lake shallows. In these stationary islands, waste materials and surrounding cities were used to manually irrigate the plants.

Early aquaponics systems can also be seen in southern China and the whole of Southeast Asia where rice was cultivated and farmed in paddy fields. These polycultural systems existed in many far eastern countries, raising fish such as the oriental loach, swamp eel, common carp, crucian carp, and pond snails.

Research into aquaponics commenced in the 1970s and is continuing with many universities across the world as they refine technologies to improve the system. James Rakocy of the University of the Virgin Islands, in particular, has been working to refine aquaponic systems over the past 25 years.

Aquaponics has especially gained momentum over the past few decades.

In turn, there is no need for fertilizers because rich nutrients are provided by the fish. Regular gardening pesticides and chemicals can’t be used anyways because they would immediately kill the fish.

Aquaponic produce grows 30% to 50% faster than normal soil-gardening because the plant spends less energy looking for resources and uses it instead for vegetative growth.

Aquaponically grown produce can also be grown up to 10 times more densely than soil-grown produce. With aquaponics, growers get a system that produces 20 times the vegetable production per square foot than soil-gardening, with 90% less water than traditional farming and agricultural technologies, and they can do it anywhere. The added benefit is that aquaponics can be managed on rooftops, in empty buildings, parking lots, deserts, greenhouses, etc.

Despite the benefits, there are a few disadvantages to using an aquaponic system.

For one thing, it can be costly to set up, as the system requires pumps, tubing, and tanks. For some climates, farmers also need a greenhouse to protect their system.

It is possible to make mistakes while setting up a garden because it requires technical knowledge of an aquaponic system. Water needs to be constantly monitored for the fish to live in an ideal environment to thrive. Aquaponics also requires electric energy input to maintain and recycle water within the system.

One of the biggest factors to watch out for while maintaining an aquaponic garden is if one component fails, that could potentially destroy the whole system. In this regard, farmers are dependent on using reliable technology to ensure that their fish and plants get the right amount of resources to remain alive and healthy.

Today’s farmers are increasingly experimental; they’re innovating in countless ways as they grapple with the serious questions that face the food production system.

The future of humanity depends on agriculture.”

With the rising awareness about the environmental harm caused by large-scale agriculture, eco-friendly farming has become a priority.

“People don’t realize how urgent it is for us to switch to more sustainable and more environmentally-friendly ways of producing our food. Our population depends on agriculture, and we need to act fast,” J said.

Aquaponics is just one of the methods of agriculture farmers like Armstrong are shifting to because it uses far less water than soil-gardening.

If not aquaponics, they are using other systems and methods, such as hydroponics, rain gardening, and rooftop gardening.

“The future of humanity depends on agriculture, and it is pertinent to rethink how humans are producing their food to take action before it is too late to make a change,” J said. 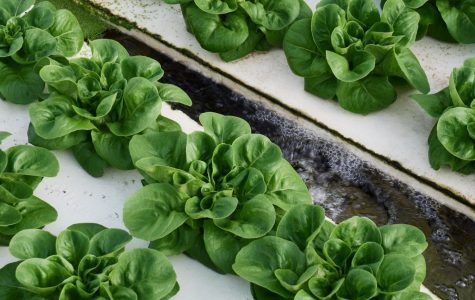 Within the aquaponics system, there are three main growing techniques used to grow crops: deep water culture, nutrient film, and media-based. Deep water culture, or raft-based growing, uses foam rafts that float in a channel filled with fish effluent water, filtered to remove solid wastes. Plants are placed in holes in the raft, with their roots dangling freely in the water. In order for addition... 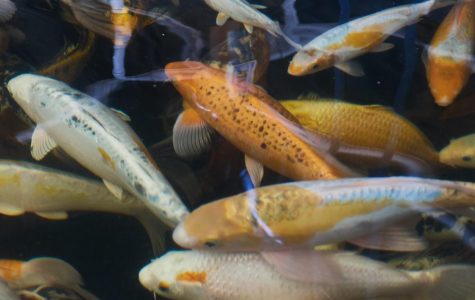 The main difference between hydroponics and aquaponics is the use of fish. Since fish are the ones feeding the plants in aquaponic culture, it is important to assess which breeds tolerate the water conditions. The fish need to be able to thrive in crowded conditions, be resistant to fluctuating dissolved oxygen levels, diseases, and parasites, use nutrients efficiently, and be edible or ornamental. ... 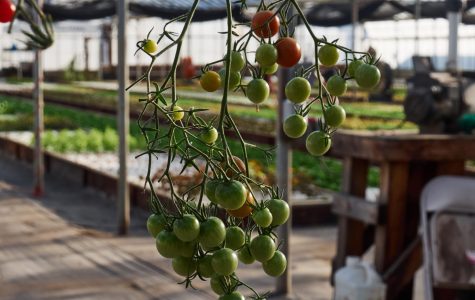 Aquaponics offers the opportunity to grow far more plants and help feed the world. It provides the means for crop yields to be greatly increased and the environment better controlled. An aquaponic system can be used to grow virtually any type of plant: vegetables, fruiting plants, flowering plants, or even microgreens. Some of the most popular, easiest to grow, and arguably best plants for aquapo...