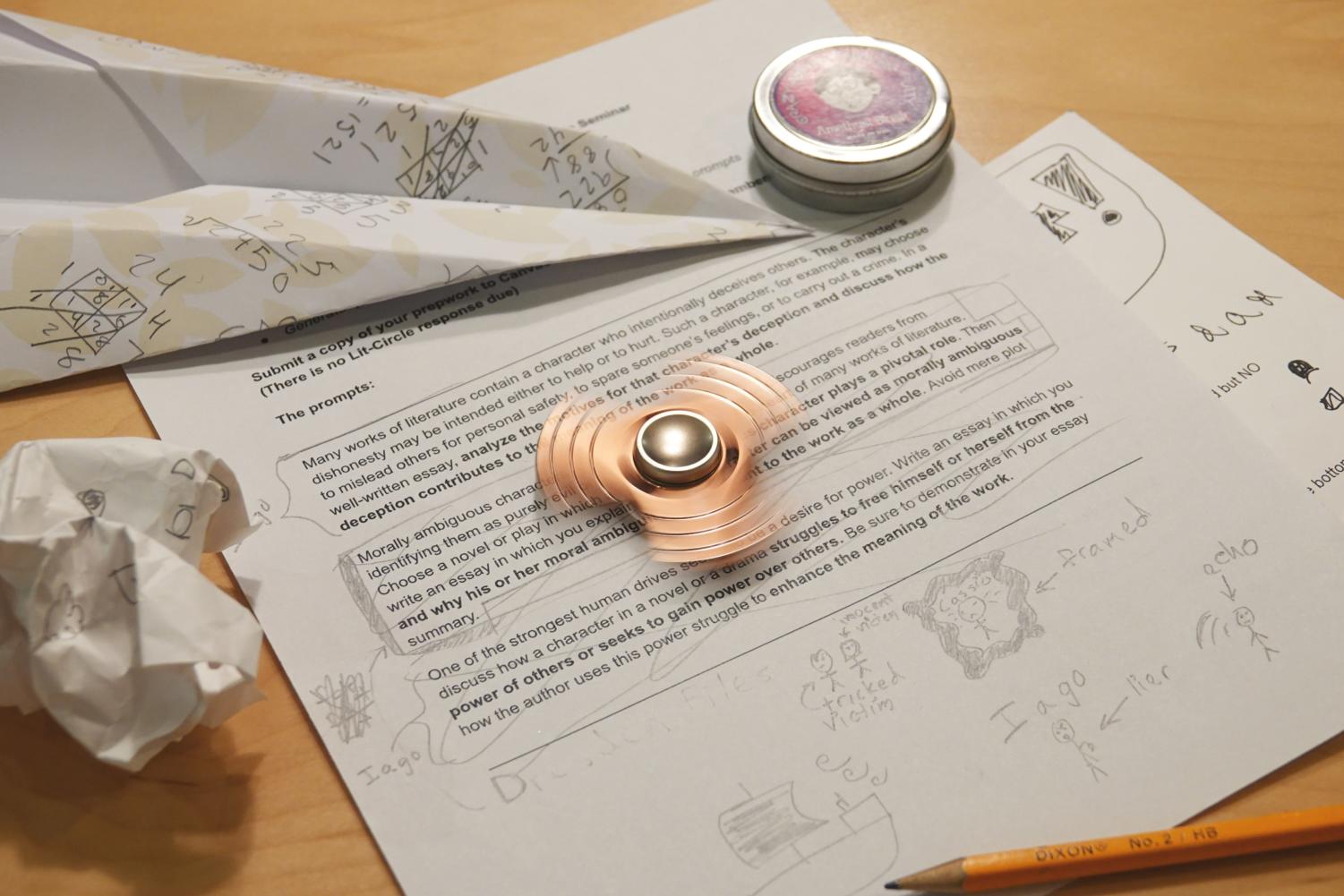 Students with ADHD are easily distracted.

There is always at least one student in every classroom who can’t stay put — twitching, talking, or daydreaming when they shouldn’t be. They are often considered to be disrespectful or disruptive, but this isn’t always the case.

According to Healthline’s “History of ADHD,” ADHD (or Attention Deficit/Hyperactivity Disorder) is a mental disorder that was first mentioned as early as 1902, but was unacknowledged by the American Psychiatric Association until 1968.

Healthline describes three types of ADHD: inattention, hyperactivity/impulsivity, or a combination. Inattention means not being able to maintain focus, hyperactivity a nearly constant need to move, and impulsivity acting without thinking.

Many people associate ADHD with hyperactivity as it is the most visible symptom. People who are inattentive but not hyperactive tend to be overlooked.

Catherine Jones* said that her son Sam Jones* wasn’t diagnosed until he was a teenager.

“My son was diagnosed at the end of middle school. I was a bit clueless because I thought ADHD was all about hyperactivity, and (he) didn’t show that,” Catherine Jones said. “The teachers missed it as well.”

ADHD can be difficult to diagnose, especially in young children, as they already have excess energy and difficulty in self-control. However, ADHD isn’t always the answer to these symptoms.

Jacob Smith*, for example, was told as early as then his daughter was still in kindergarten that she might have ADHD.

“She has lots of ideas, lots of things she wants to do, but does not see them to completion,” Smith said. “She is easily excited on projects.”

By second grade, with multiple teachers suggesting that his daughter might have ADHD and her behavior worsening, Smith was exploring the possibility.

Smith said, “It’s an easy solution. It would have been a relief to identify what was wrong.”

In fact, it turned out his daughter was being bullied. Once they resolved the issue, her grades and behavior were able to improve.

“I had to completely clear the kitchen table. He would fiddle with anything on the table,” Catherine Jones said. “Forgetting to do homework or failing to turn it in, those were the biggest struggles.”

The A.D.D. Resource Center reports that 6.1 percent of all American children are currently being treated for ADHD with medication. For some, medication has proven to be a vital resource in coping with ADHD.

Sam Jones said, “I’ve definitely become very thankful for medication because it allows me to do things that I feel like I should be able to do.”

The effectiveness of medication varies greatly, and not everyone has as successful results as Sam.

Marissa Anderson*, the mother of a child with ADHD and severe behavioral issues, said, “We haven’t found anything that really helps. They might help for a day, but then they don’t seem to work anymore. It’s just been frustrating.”

According to The A.D.D. Resource Center, one in five American children who have been diagnosed with ADHD are not receiving medicine or mental health counseling for their disorder. Learning coping strategies can help children with or without medication or professional treatment.

Anderson, who is also a college professor, was able to provide an educator’s opinion on the subject.

“I’ve always thought that there’s no reason they can’t be as successful as any other student in the class,” Anderson said. “I don’t think having ADHD prevents people from being just as successful as somebody who doesn’t have it, although I think they have to work harder.”

There are many coping strategies people with ADHD can use in addition to medication and professional counseling.

ADDitude has many suggestions for coping with ADHD. For example, meditation, music, and exercise can calm and focus hyperactivity while tools such as planners, sticky notes, and Google Calendar can help with organization struggles.

“One of the nice things about having them in college is they’ve had a lot of years to learn how to cope. By the time I get them, they have lots of strategies that they use. It’s just up to me to make sure they can use their strategies,” Anderson said.

Despite the difficulties and stress that it can cause, there can be a silver lining in ADHD. The ability to hyper-focus can lead to enhanced creativity and achievement.

“[Sam] could focus on anything he was interested in. He was very successful at robotics, and his robotics team won many competitions. He could hyper-focus on problem-solving for robotics,” Jones said. “He loved music. He played instruments since he was 5. He composed music. In college, he composed music for a friend’s computer game. He taught himself ukulele.”

Sam said that he got creative ideas when daydreaming during lectures. This is normal for children with ADHD; they may not be concentrated on what is happening in front of them, but their brains may still be busy focusing on other subjects.

However, severe ADHD can wreak havoc on families. However, Aaron Morrill, tennis coach for the Silicon Valley Tennis Academy, said that there was a bright side to his older brother’s severe ADHD.

“(My brother’s ADHD) did a lot of really tough things to our family,” Morrill said. “I’m an extremely patient and understanding person just because I had to deal with such a severe ADHD person. My older brother was someone I looked up to, and it definitely sculpted my attitude and made me much more understanding.”

ADHD can’t be cured, but people that learn to cope can prosper.

Dr. Don Williams is a psychologist who works with children and adolescents and is optimistic about the future of children with ADHD.

“Many kids I’ve known with ADHD have intense emotions,” Williams said. “Once they learn good self-control, this makes them really interesting, engaging and fun.”

Meanwhile, Dr. Wesley Dunn, a psychiatrist with over 16 years of experience, had a similar take.

“I have found my patients with ADHD to be extremely creative, leading to some of the best solutions and ideas that even I would not have thought of,” Dunn said.

Some people with ADHD aren’t able to see past the big label that says “mental disorder.” However, the same symptoms that cause problems for them as children might be key tools for them to use in their lives as adults.

Dr. Anna McQuinn, a psychologist with 31 years of experience, described the experience of those with ADHD.

“The symptoms of ADHD tend to embody traits associated with entrepreneurship. These include hyperfocus, a tendency to embrace new experiences, persistence, passion, a willingness to try out new ideas and to take risks,” McQuinn said. “Their impulsivity gives them the advantage of being able to function in unpredictable situations without becoming too anxious. Their intuitive decision making, flexible thinking, a willingness to try to live with uncertainty and their hyperfocus are important traits associated with entrepreneurship.”

*name has been changed to secure the identity of the speaker