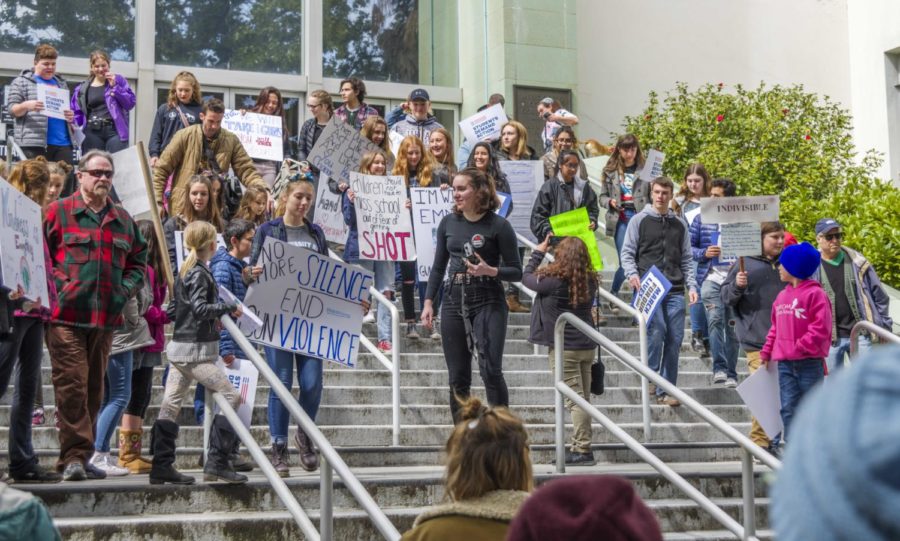 This was one of many marches in the U.S. and abroad on March 24 to protest gun violence and commemorate the victims of the Parkland, Florida massacre.

Opinion: Controlling gun violence isn’t as simple as it may seem

One problem with multiple causes cannot be prevented by one solution.

Just like gun violence cannot be prevented by a single gun ban and increased gun control across the country.

In early February 2018, 17 students were killed at a high school in Parkland, Fla. The Florida killer, Nikolas Cruz, passed the background check with no criminal record and the authorities determined him mentally stable before he was able to purchase the weapon.

This is one of the many cases where gun control does not prevent guns from falling into the wrong hands. It is clear that even with a thorough background check, there’s no way to know the future intentions of the gun owner.

Many believe that guns are the direct cause of violence. They shift the blame to the weapon when in fact, the root lies on the individual who consciously decides to pull the trigger.

Another huge misconception is when the public classifies all gun violence into the category of mass-shootings.

This misinterpretation is understandable, considering the fact that most of the controversy on gun law started when mass shootings occurred frequently in the past year. The seemingly never-ending cycle of violence stirred anger throughout the public, enough for them to speak out and demand change.

Essentially, gun violence has always been an issue, but the shootings have highlighted the problem. These mass murders are not an adequate representation of the diversity of gun violence.

According to a website dedicated to statistical analysis, two-thirds of gun violence is suicide. Gun control and background checks clearly cannot detect potential suicide victims. Consequently, an inspection of records will not be comprehensive enough to filter out those with evil motives.

When examining homicides in the past, a large majority of the shooters legally bought their weapons. Some of them had a suspicious history, but ultimately, they were able to legally obtain the gun. This suggests that the gun laws themselves should be altered before considering to sharpen gun control.

In addition, many believe that eliminating guns completely will decrease gun violence. However, a ban on guns is not the answer.

Banning guns is not an easy solution as there are multiple uses for the weapon. There must be a greater consideration for the population of people who want to own guns for reasonable purposes.

Furthermore, guns should be available to those who want to want to protect their family. Individuals deserve the right to protect their loved ones under life-threatening circumstances. A gun ban will eliminate this right, further aggravating the people.

So the question is: How do we regulate the purchasing of guns only to those have good intentions when a gun ban and an increase in gun control both prove to be ineffective solutions?

One alternative could be educating young teenagers about gun violence and gun laws. The misuse of guns and the consequences could also be taught in high schools.

Another resolution could be creating new, innovative devices to help limit the use of rapid-fire guns and prevent the abuse of guns.

One common solution that was previously stated in other opinion articles was to reach out to those at risk and who are mentally incompetent. Those who are mentally ill should not be able to go near guns as well as have access to them.

Controlling violence is not that simple. It requires thoughtful collaboration between those who oppose or support the use of guns, as well as how to handle gun violence in general.

Yes, the firearm is a common element in many violent acts and can be easily perceived as the villian. However, the true villains are those who decide to take the lives of innocent people. The focus must be shifted to those individuals if change is to be implemented.