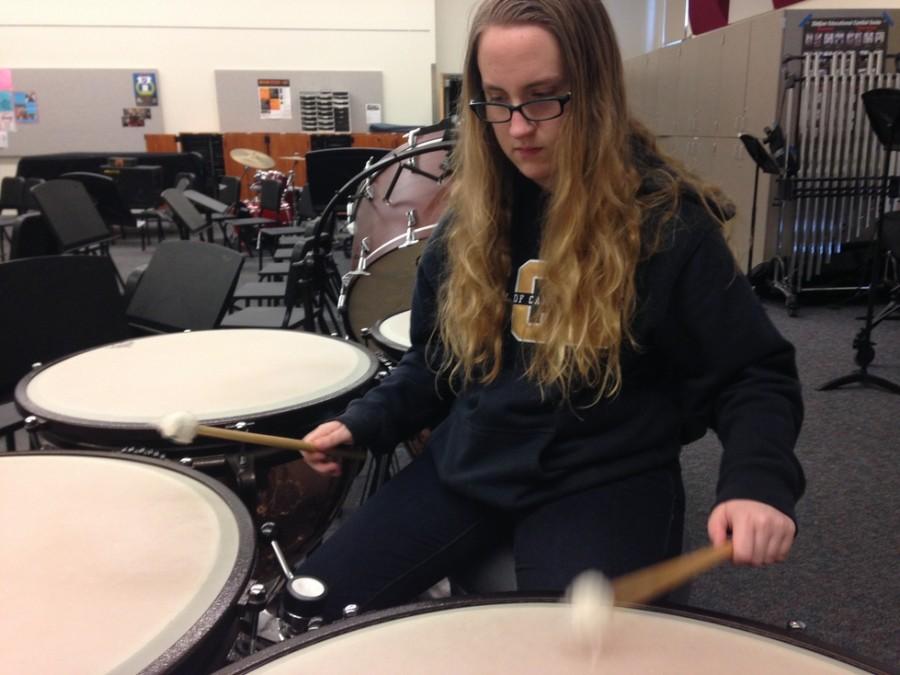 Sophomore Jenna Williamson practices the timpani during lunch. Williamson said, “I started playing music when I was in third grade after I saw these twin girls who were really good, so I got jealous and wanted to be a pianist. It was fun even though I wasn’t a great pianist, but that propelled me to do more music.”

Passion: One key to happiness

Some may say family. Friends. Money. Love. Fame. World domination. Possible answers range from the silly to the serious.

But arguably, one of the things that brings people happiness is something that many people are in pursuit of: passion.

“I can’t picture myself doing anything else,” said sophomore Jenna Williamson, a devoted musician.

Williamson is a percussionist and French horn player in the Carlmont Symphony Orchestra and the Peninsula Youth Orchestra (PYO). For her, music is her life.

“The goal for the quarter is to have 20 hours of practice for each student and I usually come up with at least 100 hours on each practice record, which is kind of insane,” said Williamson, laughing.

Sophomore Kalea Pasion is witness to Williamson’s passion. Pasion said, “She really puts a lot of time into perfecting the piece she’s working on. Her music reflects her determination.”

Williamson has made many sacrifices for her love of music.

She said, “A lot of times that I could be spending studying or doing homework, I’m playing music. I also sacrificed a lot of my social life and don’t have a lot of time to hang out with friends after school.”

For Williamson, though, it’s a choice she’s willing to make. “Music makes me happy because it’s my way of speaking to the world. Even though I haven’t made all of the auditions I’ve tried for, going through the process of auditions really boosts my self-confidence.”

Tabacek is the president of the Mock Trial club at Carlmont, in which students simulate court trials in competitions against other schools. Several graduates from the club have gone on to pursue careers in law and forensic science.

“I’m an attorney on the team, and I’ve been a member since freshman year,” said Tabacek. “I do get frustrated at times just because I care so much.”

Williamson and Tabacek are examples of people who have found a strong passion, but for many people, finding a passion feels like it isn’t a reality.

“It’s a lot of pressure to find passion in high school because in college, you have to already know what you want to major in. People are pressing it earlier and earlier [into high school], and I don’t agree with that,” said sophomore Alyssa Fong. “I think you should find your passion in college, because that’s when people are more mature.”

Despite the pressures and lack of time that many high school students face, many students often look at themselves and wonder, “What am I doing with my life?” In their ripe old ages of 13 to 19, many teens find themselves in a crisis of  wanting to know the secret behind happiness and passion. After all, passion is idealized as something that brings happiness and purpose in life.

An answer to that question could lie in the words of Cal Newport, a Georgetown University assistant professor and author of a series of bestselling books, one of which is titled, “How to Become a High School Superstar.” Newport himself is a graduate from Dartmouth University, one of the eight Ivy League schools.

In his Study Hacks blog, Newport talks about the Self-Determination Theory (SDT), which explores the source of what motivates people and makes them love what they do.

According to Newport, SDT claims that “to be happy, your work must fulfill three universal psychological needs: autonomy, competence, and relatedness.”

In other words, the theory proposes that people are happy when they have control over how they spend their time, have mastered useful abilities and continue to do so, and have a connection with others.

That seems daunting to the average person, but Williamson and Tabacek have proven that it’s possible. The matter of question is, who will do it?

Williamson is an example of someone who found something, kept up with it, became good at it, and grew to love it.

For Williamson, a career is in the works. “I would love to major in music composition and put my musical thoughts on paper, which is a really cool and creative outlet,” said Williamson. She hopes to be a teacher in the future, and has already gotten a start by teaching French horn.

While this is impressive, the beauty is that many people have passions without realizing it — sophomore Jimmy Rudger is passionate about family and hopes to carry on the love and support to his future family.

For Williamson, what started as an “I-want-to-do-that-too” moment in third grade grew into something that she now sees as a career.

Tabacek said, “I can’t imagine not being president [of the club]. It makes you realize that we’re teenagers and we’re doing something on such a great scale.”

Williamson and Tabacek never thought their interests would grow into the passions they have today. But for them, it’s now a part of their identity.

English teacher Cynthia Faupusa had a word of advice for people in pursuit of a passion: “Pursue it. Pursue it with everything you have.