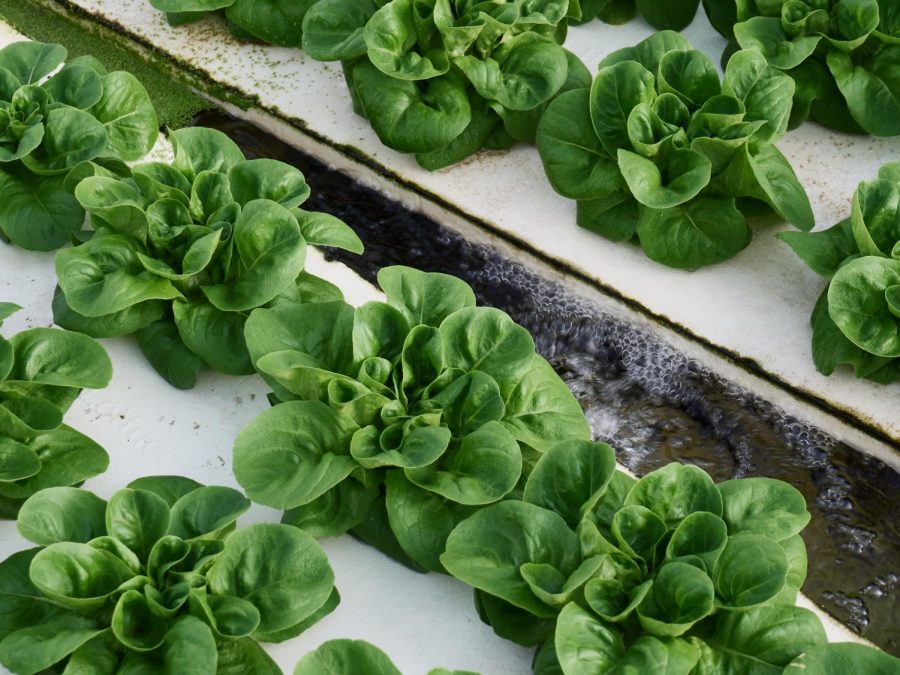 Plants rest on foam rafts floating in channels of nutrient-rich water in a deep-water culture system.

Deep water culture, or raft-based growing, uses foam rafts that float in a channel filled with fish effluent water, filtered to remove solid wastes. Plants are placed in holes in the raft, with their roots dangling freely in the water. In order for additional securing, net-grown pots can be placed in the holes and filled with clay or coconut media for plant substrate.

This method is commonly used for growing salad greens and other fast-growing, relatively low-nutrient plants. It’s also popular among larger commercial-scale systems because the raft can cover a large amount of space and, once the plants are harvested, the raft can be reused for another cycle of planting.

Because it can be implemented on a large scale, the method is perfect for systems to tackle the global issue of food insecurity.

The Nutrient Film Technique (NFT) involves growing plants in narrow channels, allowing for a continuous but thin flow of water, giving more oxygen and a constant supply of nutrients. This method is limited to only smaller plants, such as leafy greens, that don’t have large roots.

With this method, careful attention must be given to plumbing, specifically pipe diameter, because of the potential risk of clogging from the organic fish waste. It also requires the addition of a biological filter because much of the system is not exposed to air.

The NFT method requires constant maintenance and only a small set of plants can be placed in this aquaponics design, which is why it is not commonly used in aquaponics systems. Nevertheless, Ouroboros Farms uses the NFT method for some of its leafy greens, like lettuce.

Lastly, the media-based method consists of growing plants in a large container filled with media, which can range from gravel to perlite. This method uses the fewest components, as solid waste is broken down throughout the media, removing the need for a buffer filter.

The media-based method produces plant growth at a slower rate than the NFT and deep water culture methods because they have additional components. However, it provides for a more secure grow bed to allow for larger plants, mostly of the fruiting variety.