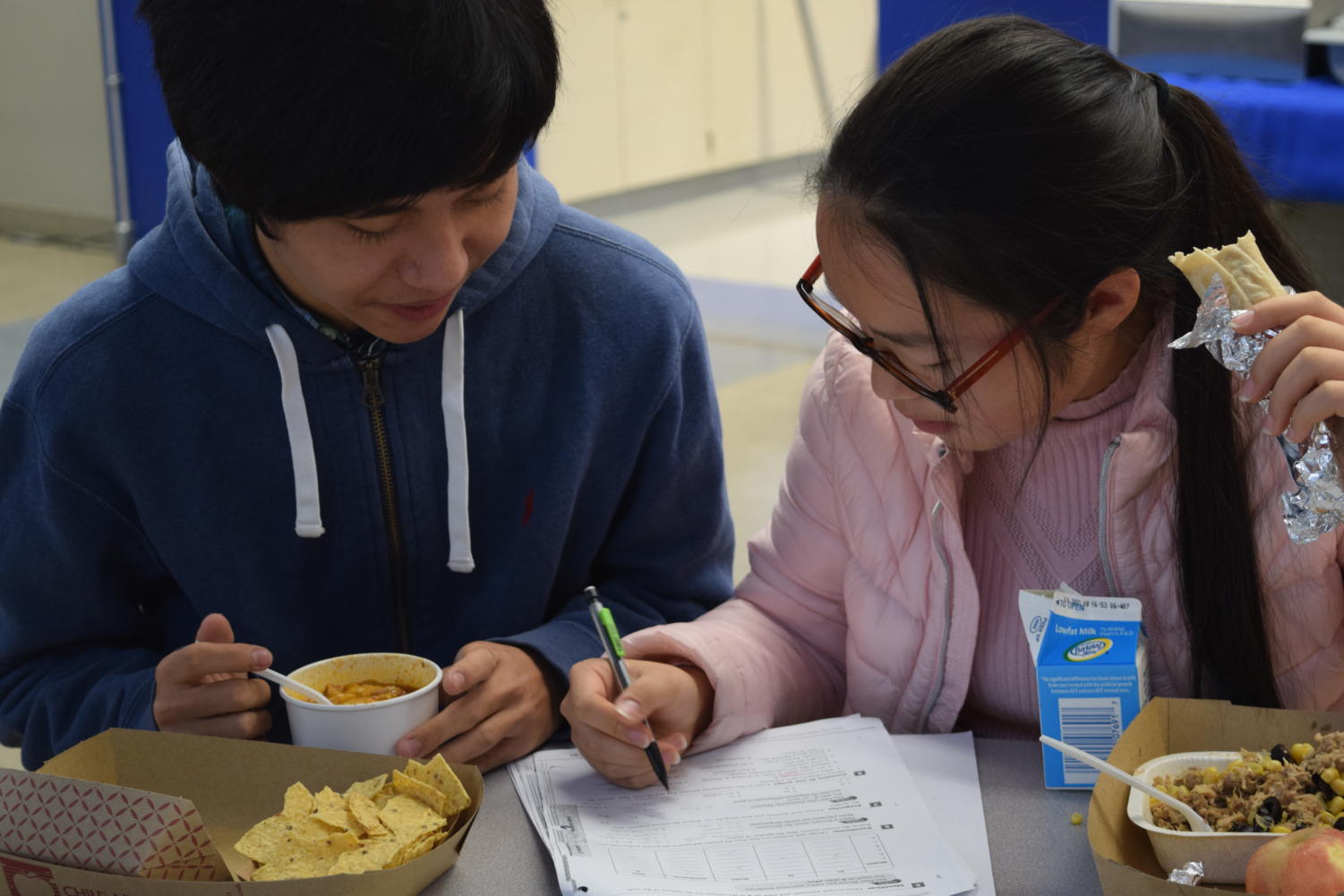 Melody Liu, a junior, helps Lou Bao, a senior, with his homework at lunch. (Maya Lip)

Melody Liu, a junior, helps Lou Bao, a senior, with his homework at lunch.

“All Asians are smart.”

This statement is a well-known assumption that is found to be the center of many stereotypical jokes. However, what seems like a light-hearted jest can have a negative impact on a huge population of the students that attend Carlmont High School.

It is a recurring instance that students of other races express confusion when an Asian-American is not taking a higher academic class. Students such as Barney Li, a sophomore, have experienced this problem before.

“Everyone thinks I’m really good at math. I guess I’m in one of the higher math classes for a sophomore, but I worked really hard to get that position. It’s not something I am born with,” Li said. “Everyone expects a lot from you, and if you don’t deliver, everyone assumes that you’re not a ‘true Asian.’”

This subtle assumption can have a big effect on those who are stronger at other subjects.

“[The stereotype that all Asians are good at math] causes a lot of trouble for those who are stronger at the English subject. I feel like Asians are expected to be system-oriented, but when [they] are not, it’s less favored for [them],” said Rebecca Jiang, a senior.

Not only are students feeling this, but a study called “Impact of ‘Model Minority’ Myth on Underachieving Asian Students in North America” has shown that the stereotype is detrimental to the Asian-American population across the country.

Research by Guofang Li shows that the stereotype causes educational departments to disregard the academic assistance needed from struggling Asian-American students. Additionally, the teachers assume that they will succeed without providing extra support from other programs and services.

Oftentimes, it causes many Asian-Americans to feel that they do not get recognition for the effort they put in.

Jiang said, “I think the number one quality that people make an assumption about me is that I don’t work for the grade I get. It’s kind of an expectation for other people to see me to get good grades. I think that invalidates a lot of the effort Asian-Americans put into their work. Of course, there are going to be people that naturally understand a certain concept over others, but to assume that we don’t put in work for the reward that is paid off makes us feel like we’re expected to perform a certain way.”

For multiple students, this received idea forces a lot of unwanted pressure on them. It is stressful for these students, especially when high expectations cannot be met. If they fail to meet the standards put on them, it creates a lot of self-dilemma for the individual.

“Asian-Americans are just like everyone else and have the same learning abilities. It’s unfair because some Asian students that aren’t as academically gifted may feel self-conscious or ashamed that they’re not taking higher classes. They may also be put down by other students for not living up to the expectations of this stereotype,” said Andrew Pon, a junior.

Even their own peers may take advantage of their ethnicity. For example, Asian-American students are noticing that others are regularly asking them to help with assignments and school work.

“I do want to help them, but if it comes to a point where it is excessive, that’s when it gets irritating,” said Vienna Huang, a sophomore.

The assistance that is constantly needed by classmates puts further pressure on Asian-American students.

“It made me feel good about myself that people wanted help from me, but the pressure [it puts on me] makes me think that I have to know the answer to their question or else they wouldn’t want to ask me anything else in the future,” said Claire Taggart, a freshman.

Although Carlmont students did not notice anything specific about how they thought teachers perceived them, studies show that there is certainly some sort of standard that teachers hold for Asian-American students.

A study done by Kimberly Goyette and Yu Xie at the University of Michigan examined the “social mobility and the educational choices of Asian Americans.” Their research proved that there’s a strong correlation between the model-minority stereotype and the student’s own academic achievements.

Furthermore, these researchers concluded that teachers presumed Asian-American students had higher qualities over students of other ethnicities. Even so, the pressure that students face from teachers is only one of many impacts of this common assumption.

An Asian-American student’s performance at school is not only affected by the suppositions made by their teachers and peers, but also the pressure from their own parents.

Asian-Americans having strict parents is another stereotype of its own, but it shares a clear connection with the model-minority stereotype.

“My parents don’t think they’re strict, but they are compared to other parents that I know of, I feel too restricted and can’t fully enjoy free time, even after I am done with [school work]. It feels like what I do is never enough because there is always something more I could do,” Pon said.

The “strict parent” stereotype holds a lot of truth when it comes to the way some students were raised.

“My parents want me to try my hardest to have A’s and not have any grades less than a B. That sometimes puts pressure on me because obviously, staying in the A and B range can be challenging especially if you don’t understand a certain subject,” Taggart said. “If there is something that relates to college like a practice SAT test, my parents will have me take it even if I don’t want to because they believe that practicing early will help me see my strengths and weaknesses of different subjects.”

It was also a common occurrence for parents to become more laid back as time passed. This style of parenting was established to be advantageous rather than harmful.

“When I was pretty young, my parents used to push me a lot. But as my family situation became different than what it typically was when I was younger, my mom definitely became a little more laid back and allowed me to succeed in a way that I wanted to. But because they pushed me, that [sense of] individuality and self-motivation from being pushed was almost ingrained in me already,” Jiang said.

The model-minority stereotype has dated all the way back to the mid-1900s. Its exact origin is still unclear because there are many factors that take place.

According to a study from the International Pragmatics Association done by Angela Reyes, the model-minority stereotype that is applied to the Asian-American population today emerged during the time of the Civil Rights Movements in the 1960s and the Cold War.

Scholars stated that the myth of an Asian-American’s “success story” was initially used to suppress the racial tensions between minority groups and establish a behavior that all minorities should follow. From there, the stereotype grew and became prominent typecast in schools.

Asian-American students undergo stress on a daily basis due to both the pressure from parents and high expectations. Nevertheless, the stereotype has its benefits according to Jonathan Su, a sophomore.

“People look up to you. You have a chance to be able to learn new things faster than anyone else. I mean, being in accelerated classes helps prepare you for college. I feel that the American standards are almost lower than the standards that Asians set for themselves, so [they are] going to be in great shape in the future,” Su said.

Not only Asian stereotypes but any stereotype that is directed toward a certain race has the potential to affect individuals in numerous ways.

Sophomore Amanda Li said, “Asians are put into this stereotype that they are automatically smart and [because of this], they are constantly trying to live up to these excruciating standards that are so difficult to achieve.” 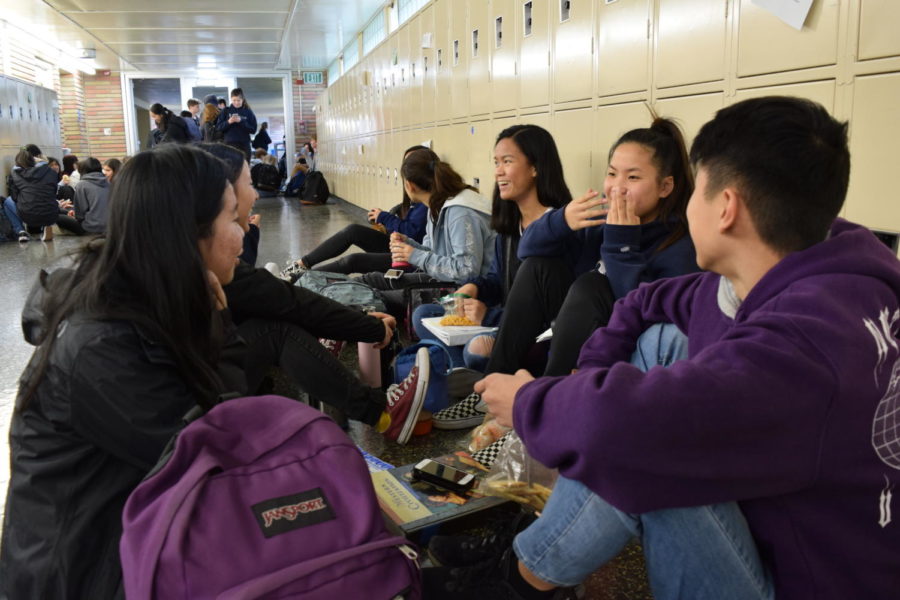 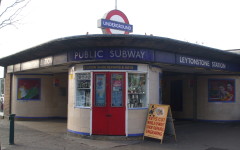 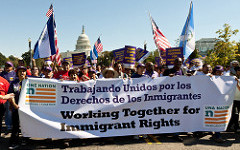 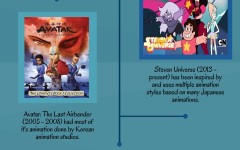 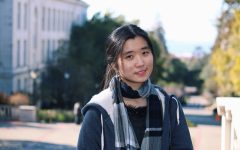 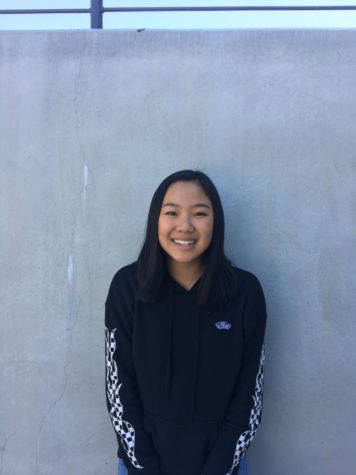 Maya Lip, Staff Writer
Maya Lip is a sophomore at Carlmont High School. She is a member of ASB at her school and YAC for San Carlos.  She enjoys photography, listening to music, and anything with avocados. 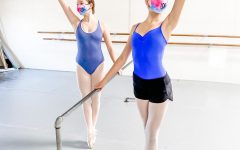 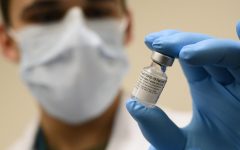 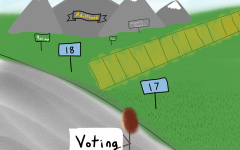 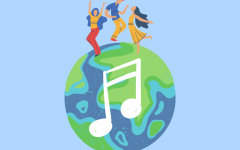 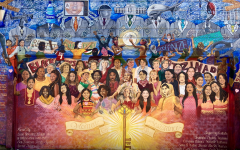