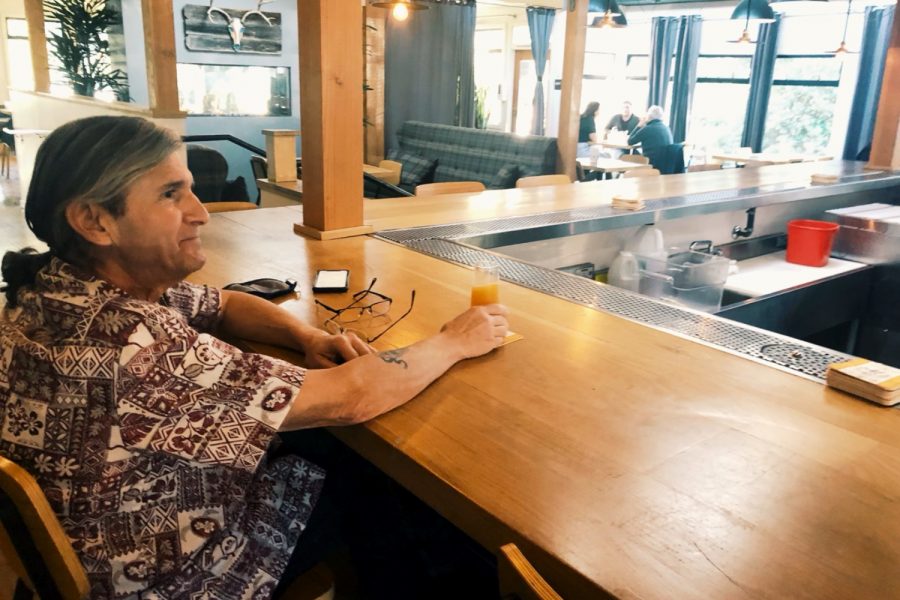 George Metropulos enjoys a drink at the bar on a Wednesday, the day of his weekly visit to Waterdog Tavern in Belmont. He calls these days “Waterdog Wednesdays.”

Metropulos was sitting in Waterdog Tavern, a restaurant he often frequents, when police officer Trevor Abinader came into the tavern. Abinader graduated from Carlmont in 2011.

“This is Mr. Belmont,” Abinader said.

Metropulos was on the Belmont California City Council for four years, and he served as Belmont’s mayor from 2003-2004.

Metropulos grew up in Belmont. As a kid, he went to Nesbit Elementary, Ralston Middle, and then Carlmont. As a Carlmont student, he would wake up each morning at 5 a.m. to get to 101 Burgers and Shakes to clean up the diner before heading to school. Later he got a job working at a nursery, where he worked for four years tending to plants.

Metropulos explained that he despised attending school and didn’t even want to go to college after graduating from Carlmont in 1974. His opposition to attending school is ironic, considering he ended up teaching for 32 years.

“A close friend of mine, Eileen, had become a teacher,” Metropulos said. “And she always loved it. But I didn’t think anything of it. Until one day—I’ll never forget this—one day, she called me in the morning in a panic saying she was going on a field trip and a parent bailed, and they wouldn’t be able to go if she couldn’t find one more chaperone. So I went there, and in the middle of it, I went, “This is really… kind of cool.” So I started going into her class once every few weeks and doing sports with the kids. And then that ultimately led to a job for me working at the Parks and Rec. Department in Belmont running day camps in the summer.”

Metropulos said that he loved interacting with the kids. He would give them fun nicknames, and his own assigned name was “Rattlesnake.”

“In the middle of doing that, I was thinking, I like working with kids and everything, but I want more; something that’s more impactful. Not that doing games and activities and nature stuff isn’t impactful, but something longer term. So, ultimately, I went back to school to get my credential. And the rest is history. I was a teacher for 32 years,” Metropulos said.

Metropulos taught in Redwood City and at Ralston Middle School, but most of his career was spent at Central Elementary School in Belmont, where he taught for 23 years.

During these 23 years, he noticed that many changes were occurring around the Carlmont community. For example, the only facility in the Carlmont shopping center that has remained the same since the ’70s is the pizza place Village Host.

Metropulos gave examples of how lax the school rules were when he attended Carlmont. He said that the school used to be an open campus, so many students would leave campus and not come back. The students had more independence and freedom on campus.

“When I was going to Carlmont as a freshman, there was something called ‘being initiated,’” Metropulos said. “Not everybody would do it. But oftentimes, what it would entail was the older kids chasing you down and then smearing your face with lipstick. That’s how you know you’ve been “initiated.” They would also throw the kids in trash cans and then throw them over a wall where the library used to be.”

Metropulos himself was one of the freshmen “initiated” by the upperclassmen.

“I remember going home with all this lipstick on my face, and my family was like, “‘What happened to you?’” Metropulos said. “It was kind of a rite of passage.”