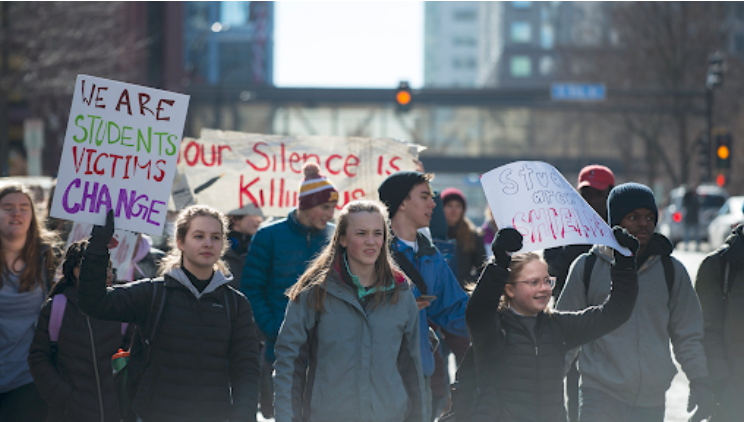 We need to end gun violence and that means implementing stricter laws.

Opinion: Gun control needs to be taken to the next level

The rulebook of the U.S., like it or not, is always changing. To keep up with modern times, we are forced to interpret and amend the constitution where ever needed. So why do some still cling onto the Second Amendment?

The Third Amendment provides an example of this trend — it is not very often that we have an issue with the quartering of soldiers during peacetime now, and if we were to always keep up with the standards of 1791, society would never be allowed to progress.
After all, that was the purpose of the Bill of Rights in the first place: to rectify the mistakes made by the constitution. And now, it is our turn to rectify the mistake that was the Second Amendment.

The Second Amendment, just like the Third, has been rendered moot by today’s standards. It has long outlived its usefulness and even does as much to pose a danger to our security. And no, I’m not just talking about mass shootings.

The U.S. has the most gun-related suicides out of any other country in the world. Twenty thousand lives each year are taken away by the pull of a trigger, and coupled with the fact that teens today face depression and mental health disorders at disproportionate levels, the presence of a gun can provide an unhealthy environment for their susceptible minds.

Suicide is in the top three leading causes of death for those under 18 in America and is the 10th total leading cause of death across the U.S.

Fifty-two percent of total suicides in the U.S. are committed using a firearm, often chosen for its ability to provide instant death.

And although one might argue “even if we were to take away guns, people could just find other ways to commit suicide,” this would be the wrong assumption to make.

Of course, they could — but none of them are as effective as a gun.

Ninety-one percent of suicide attempts using a firearm result in death, compared to only 2% (1 in 50) of those who attempt to overdose. With 43% of Americans living in a home with a gun, and, according to the Brady Campaign, 82% of adolescents committing suicide using a family member’s gun, there is a frightening correlation.

As a study conducted by NBCI has proven, the mere presence of a gun “increases the risk for suicide among adolescents,” tripling the total chance of suicide overall.

However, as we all know, gun violence extends far beyond self-harm.

It’s estimated that a shooting occurs once every eight school days. One hundred Americans are killed or injured with a gun each day, and 47 of them are children or teens.

“But we need guns to protect ourselves.”

According to the Pew Research Center, 67% of Americans who own a gun reported that they have one for protection. Although, how accurate is that statement? Do guns really protect?

Trump himself has said that 98% of instances of gun violence take place in gun-free zones.

However, there are no set-upon definitions of either mass shooting or gun-free zones, and, as a Washington Post study demonstrates, this statement is, in actuality, false.

Many often leap to the assumption that if everyone has a gun, violence will in some way be less as all have equal advantage over one another. Though if you take away everyone’s gun — perhaps, by repealing the Second Amendment so that it applies to the entirety of the U.S. — there would be less death, less suffering, and less tragedy altogether. When something is “not enough” you don’t just give up. You have to do more.

This statistic would make much more sense when you actually consider the details.

California, for example, is a “gun-free zone” yet has a high number of mass shootings.

However, rather than having to do with the fact that it is gun-free, California is also the most populous state in the U.S., and will, therefore, make up a more substantial share of gun violence either way. In addition, states such as California that have high numbers of low-income and homeless communities, tend to be heavier on crime nonetheless. Even so, as much as 20.1% of California’s population still own a gun.

So, no, there is no direct correlation between higher gun violence and stricter gun laws.

In places such as Mississippi, the “right-to-carry law” was shown to have even increased crime.

And states that have some of the highest percentages of gun owners, such as Alabama, Alaska, Arkansas, Louisiana, and Mississippi, have the highest murder and manslaughter rate per 100,000 in the U.S. as of 2015.

Therefore, despite what some may think, more guns does not equal more protection.

A gun upsets the balance of power with its ability to take a life instantly. When held in specific hands, it can be more dangerous than it had first appeared in the 18th century.

“But owning a gun is part of my American identity.”

In the constitution of the U.S., Thomas Jefferson wrote that everyone deserves a right to “life, liberty, and the pursuit of happiness.” Similarly, when the Bill of Rights was written, it was kept in mind that there were limitations to each.

Just as one’s right to speak can often translate into violence, one’s right to own a weapon can very well infringe upon another person’s right to live. When the Second Amendment was written, the weapons that they had were not able to take multiple lives in a matter of seconds.

Repealing the Second Amendment would be what it truly means to be “for the people.” Not the individual. But the people.

Fifty-three percent of Republicans oppose repealing the Second Amendment, and this is an argument you will frequently hear from both parties.

It often appears like the leading party of the U.S. has some contradictory opinions: they were so quick after 9/11 to blame Islam as a whole rather than the individuals who were involved in the event, that they saw fit to enact the Muslim ban.

I personally find it ironic that the same people who make hasty generalizations about a group of people would not like the same to be done to an inanimate object.

And whenever a white teenager commits a mass shooting, the media will be quick to blame their mental or emotional health. Or the fact that they were bullied. Or the influence of violent video games. Or their medication.

Either way, I doubt the presence of a gun in their home is doing their mental health any favors.

As mentioned before, the presence of a gun in a home is much more likely to increase the chances of suicide in adolescents, so why shouldn’t it increase the penchant for violence?

“But not all guns are used to kill.”

No, I concede the fact that not all guns to exist have led to the death of a human being. Though what it was its original intention?

And, yes, the majority of children in the U.S. today live in fear that they might be shot with one, so much so that some will even skip school. According to Al Jazeera, as many as 1,200 children have been killed by guns since Parkland.

Whenever the NRA feels threatened, the playing field changes completely. Though I suppose, with them, it’s all about self-preservation – after all, it’s why they have guns in the first place.

And here I am thinking if only they took the energy they put into defending their guns into fighting for the lives of the people in this country, the world that we live in might not have to be one of fear. Unfortunately, that is not the case.

In a breakdown of the D.C. v. Miller case by Cornell University, which had guaranteed the right for one to carry a weapon, they clarified that “It is not a right to keep and carry any weapon whatsoever in any manner whatsoever and for whatever purpose.”

The occurrences of school shootings in this country outnumber any other in the modern world by 57 times. For whatever purpose as to why one would want to keep their gun after all of these tragedies, I might never understand.