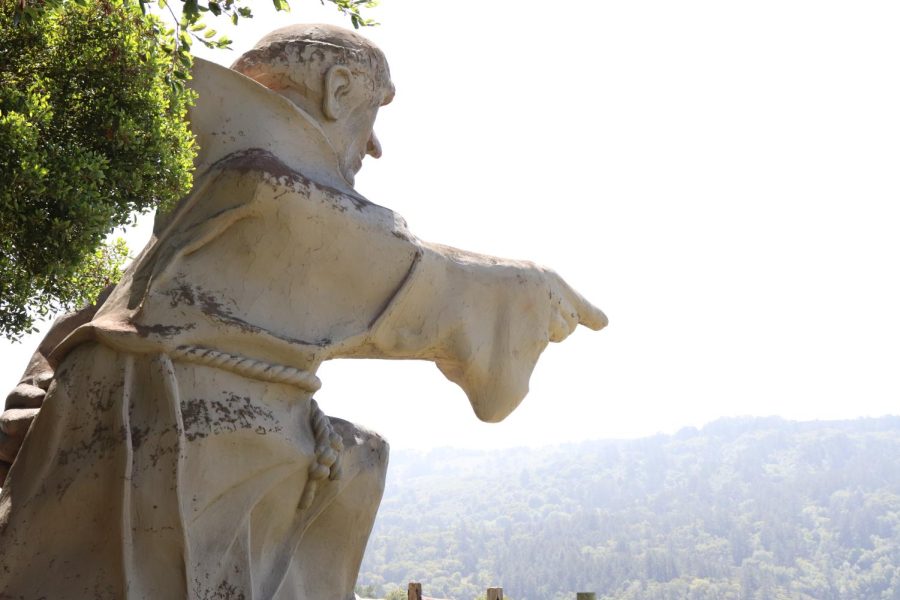 The statue of Junipero Serra stands as a permanent glorification of colonists.

As much as the Western Eurocentric culture attempts to deny it, colonialism has a visible and intense effect on the world, the United States, and California.

The Stanford Encyclopedia of Philosophy defines colonialism as “a practice of domination, which involves the subjugation of one people to another.”

While many ancient civilizations practiced it, National Geographic states that what people think of as modern colonialism began in the 15th century with the Age of Discovery. European nations generally practiced colonization for economic or political benefit.

There was often a rationale for colonization, claiming the economic, religious, or political benefit to the colonists’ own countries.

The Spanish conquistadors took a religious approach to their colonization. They stated they had a religious obligation to “civilize” the Indigenous people, who they believed to be “savage” or “barbaric.” Conquistadors attempted to achieve this through forced conversion to Christianity.

In the time of Pope Innocent IV, non-Christians were allowed to govern themselves. The only exception to this was if the Spanish deemed the people unable to perform duties according to the principle that every “reasonable person” was able to recognize.

Habits of Indigenous people were considered an inability to conduct themselves and, therefore, gave the conquistadors an excuse to take over and “civilize” the people living in California. The California Missions were a result of this religious conversion.

The California missions and their effect on the Indigenous population 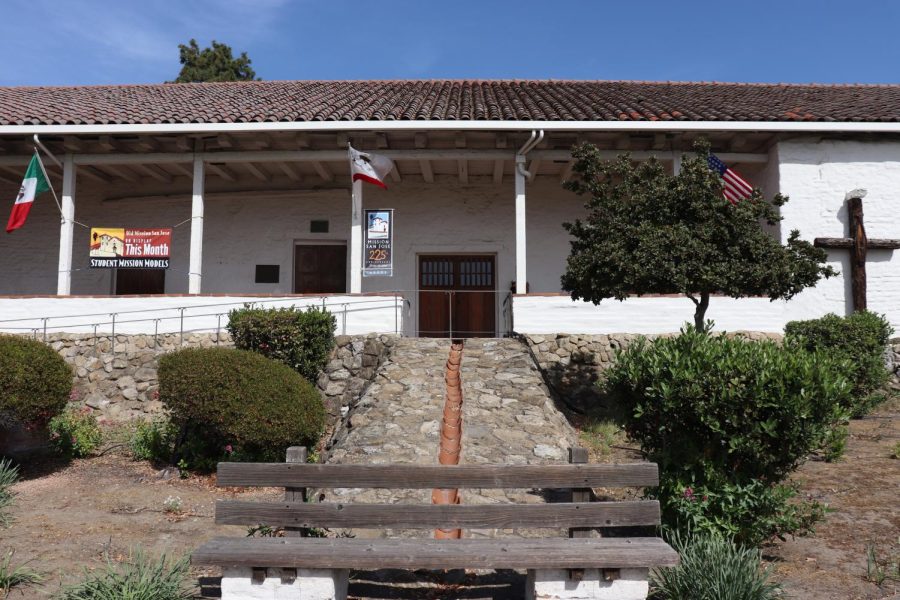 The actual occurrences and treatment of Indigenous people are incredibly different from the narrative told in Californian education.

According to the Native American Heritage Commission (NAHC), Spain originally authorized the conversion to Christianity of Indigenous people. The final goal was to give control of the missions to the Indigenous people.

“Politically, the goal was to create colonies of Native peoples in service of the Spanish crown, but self-governing colonies never formed in great part because of the extremely high death rates,” said Jonathan Cordero, the Executive Director of the Association of Ramaytush Ohlone.

Treatment of Native peoples was harsh. According to Tatiana Irwin, professor of history at the College of San Mateo, other European countries compared this treatment to additional forced labor.

“European powers coming to California compared the way the padres and soldiers were treating the California Indians to forced labor on sugar plantations in the Caribbean,” Irwin said.

Mission Santa Clara describes harsh punishments used at the mission, such as rescinding food, punishments to the body, and imprisonment. According to “The California Missions Were Far From Faultless” by Francis F. Guest, punishment also included whipping, which often caused severe injury, disembowelment, hanging, and castration.

“Physical punishment was used in the resocialization process by the Spanish,” Cordero said. “This punishment was not normal for Native peoples, and they experienced it as abuse.”

According to Frederick Gaines, the chair of Ethnic Studies at the College of San Mateo, Junipero Serra took inspiration from the punishments from the Spanish Inquisition and often beat himself.

“[Serra] was brutal,” Gaines said. “He believed in torturing people when they did not convert, so they brought that perspective to the ‘New World’ [of] you break the man, you save the soul.”

Many devices found at the missions were similar to or the same as those used during the Spanish Inquisition, including cats of nine tails, clubs, and devices that would mutilate the body. According to Cordero and Gaines, Indigenous women would also experience sexual assault and punishment for engaging in sexual acts. Gaines also mentioned how different forms of erasure of Indigenous culture eventually led to genocide.

“Part of colonization is you must commit epistemicide, erase their way of knowing,” Gaines said. “You must [then] commit linguicide, erasing their language or condemning them for speaking their language, which leads to genocide.”

“If you look at the work [the Spaniards] were asking [Indigenous people] to do, a lot of this was hard labor; they were constructing missions,” Irwin said. “They were also doing most of the work growing food for the Spanish.”

Demanding work and punishment were among the hardships the Indigenous people faced directly from the conquistadores but they were not the only difficulties. Along with colonization and abuse, the Spaniards brought a multitude of diseases with them to which the Indigenous communities were not immune.

The Native American Heritage commission states that diseases brought to California by the Spanish included measles, smallpox, syphilis, and chickenpox. The uncleanly state of the missions and colonial population centers also contributed to the decline of the general population.

Conquistadores used several methods of attracting the Indigenous population to the missions. According to “Sifting the Evidence: Perceptions of Life at the Ohlone (Costanoan) Missions of Alta California” by Russell K. Skowronek, the first Ohlone to join the missions were given gifts such as cloth, ribbons, and beads.

Widespread disease across the Indigenous population also gave cause for joining the missions, as they provided an alternative to a severe climate. However, Indigenous people did not only join the missions of their own accord. Often, the Spanish captured them to create a congregation, taking them away from their lives and forcing them into the missions.

The social structure followed a caste system in the missions, following social classification and then racial classification. According to “Native Persistence: Marriage, Social Structure, Political Leadership, and Intertribal Relations at Mission Dolores, 1777–1800” by Cordero, the structure followed a social ranking of European versus non-European.

“Indigenous people were always at the bottom of the social structure,” Cordero said.

Typically, the darker the color of someone’s skin, the lower they were in this structure.

Ultimately, the treatment of Native people was abusive, and it doesn’t fit the narrative that Californian schools teach during class field trips or the infamous mission project many students built during fourth grade.

In addition to the mission era, treatment of Indigenous people improved little during the California Gold Rush, and once California became a state.

In 1850, the Act for the Government and Protection of Indians was passed in California and, according to Irwin, originally had positive intentions. According to the Library of Congress, California created the law to govern affairs and protect Indigenous communities, though it never lived out its intended purpose.

“It was passed by people who want to protect and save California Indians, which is also problematic,” Irwin said.

Cordero, Irwin, and Gaines all mentioned how rather than protecting Native communities, the law monetized and encouraged non-Native members of the state to kidnap and indenture Native children and murder Indigenous adults.

“They would take the kids and force them to work,” Gaines said. “The girls were abused; sometimes the boys were abused.”

Consequently, rather than being a law of protection, the law was one of genocide and further ostracization of Native people. According to Irwin, due to the original intentions of the law being positive, those who created the law worked to repeal it once the actions of non-Indigenous people became evident.

“[Pioneers] would be reimbursed for expending their bullets on Indigenous people,” Gaines said.

According to “Unacknowledged Tribes, Dangerous Knowledge: The Muwekma Ohlone and How Indian Identities Are ‘Known’” by Les W. Field, in collaboration with the Muwekma Ohlone Tribe, many surviving lineages from Missions San José, Santa Clara, and Dolores lived on ancestral lands in the East Bay. The NAHC states how the US federal government created a policy in 1854 that provided reservations for Indigenous communities, but they were insufficient for basic human needs.

Later, during the 1900s, the Bureau of American Ethnology (BAE) was the leader in researching Indigenous cultures. The BAE was led by John Wesley Powell, who believed that Indigenous people were a savage stage of humanity,  according to “From Savage to Negro Anthropology and the Construction of Race” by Lee D. Baker.

Farther into the twentieth century, the 1934 federal Indian Reorganization Act (IRA) created new forms of relationships between the US and tribal governments. The IRA also created a system for new tribal sovereignty. Federal recognition allows Indigenous people to claim resources from the federal government, whether they live on reservations or not.

Despite the history of the Spaniards’ and state’s abuse of Indigenous communities, Californian education is a glorified record of the colonization experienced.

“There’s this romantic story of the missions […] that these were places where the fathers treated Indigenous people with kindness, love, and respect,” Gaines said.

Irwin notes that much of the education Californians receive about the missions takes place during fourth grade, and even then, it is not a comprehensive discussion.

She mentioned how it is challenging to have the serious conversations that come with talking about colonization with young children, considering many adults are not comfortable with the topic and are not equipped to educate people about genocide.

Furthermore, Irwin discussed how, when educating people about the missions, it is crucial to understand that the missions were the first carceral systems in the US due to being sites of punishment and that people must go back as far as the start of the missions to fully understand how California Native people are treated.

Gaines added to Irwin’s criticism of the education system, mentioning that much of the curriculum’s structure is wholly glorified.

“[People claimed] the Spaniards were land developers; they were trying to promote California,” Gaines said. “Up until the 1930s and 1940s, we started having this romanticism of the California missions; they were making movies about it, writers were writing stories about it, so they made up this story. By the 1950s, everyone accepted it as the truth.”

According to Gaines, much of the information provided by official education centers, such as tours and educators, is this glorified narrative that was created in the twentieth century. While it is possible to find primary and secondary sources that describe the actual events that occurred in the missions and the California state, they are usually not provided, and people must intentionally search for them.

When living in California, people must understand how Indigenous people have been exploited and abused at the hands of colonizers, the state, and the US entirely.

“[People must] search out the truth,” Gaines said. “There are so many sources where you can find the truth.” 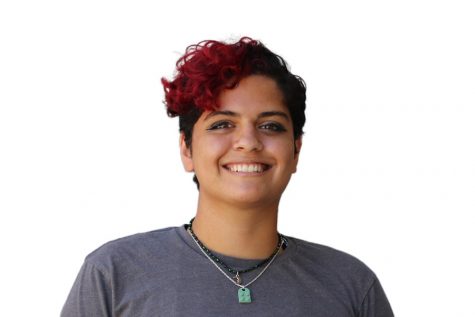