They rose. They resisted. And most notably, they repeated.

On Saturday, Jan. 20, the women of San Francisco took to the streets one year after the Women’s March on Washington with a powerful message: Hear our vote.

The San Francisco March was one of many sister marches held around the country in support of the main march, held in Las Vegas. This year, the Women’s March has a strong focus on voting and voter registration, as the 2018 midterm congressional elections loom ahead.

“I hope a whole lot more people will register to vote, and vote not just for president, but down the entire ballot. Between now and last year, we have shown that we are not alone in being outraged, and there are the actions to back things up now,” Alicia Loewenthal, a marcher and Bay Area resident said.

As marchers flooded into Civic Center Plaza, protest music played, and petitions circulated around the plaza for items such as Proposition S. Volunteers also attended to assist people in registering to vote.

“A crowd this big can’t be ignored, this energy can’t be ignored, and we all just need to get out there and vote this November. If folks don’t exercise their rights, then before long we won’t have them anymore,” Chris Paxton, who came with his mother, said.

“Last year’s march ignited the resistance, this year’s march is fanning the flames,” Billoo said, earning the applause of tens of thousands of people.

Stressed at the march was intersectionality, a component that many believe was left out of last year’s marches, as well as an emphasis on immigration.

“Today we are the architects of a new political and cultural era. It is an era that is led particularly by black women,” Allison said.

All of the speakers were accompanied by an American Sign Language (ASL) interpreter and space near the front for the disabled. Additionally, a trolley was provided for disabled marchers. Numbers in the high end of tens of thousands of people are estimated to have marched in San Francisco, with other Bay Area sister marches coming in at 40,000-50,000 in Oakland and 20,000 in San Jose.

“I came out here last year because I was worried and afraid of what was being promised [by the government], and many of those things are still worrisome. There is a great combination of everyone being energized and being fired up, but there is unity to that, as well as good sense of community,” Loewenthal said.

Signs carried by marchers bore sayings such as “Girl Power,” “Men of quality do not fear equality,” “Grab em by the midterms,” and “Girls just want to have fundamental rights.” 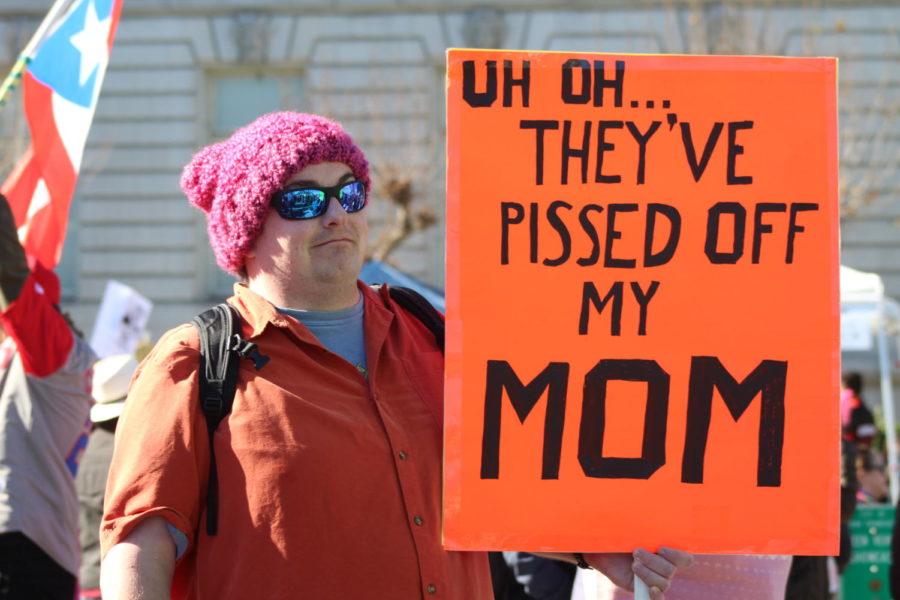 Gallery|11 Photos
Chris Paxton carries his sign before the rally in Civic Center. "I was hanging with my mom recently, and she said she was interested in coming," said Paxton.

Once the speakers were done, the march began. The women and their allies, old and young, poured into the streets for the 1.7-mile walk down market and battery streets to get to the Embarcadero.

“I’m happy to be here. I came in Oakland last year, and everyone was in support of each other, and it’s good to see that again” said Laura Pitchford, who came as part of the gun sense group Moms Demand Action.

The marchers filled the streets as far as the eye could see, with no end or beginning in sight to their masses. Market Street became a sea of pink, as many marchers donned pink pussyhats. Spectators from restaurants and businesses cheered as they came by, with one building even blasting music and waving signs through their window to show support.

The march remained peaceful, but still had a clear sense of purpose and welcoming spirit, leading many men to come, as well as causing many to bring their children.

“When the women in my life invited me to come, I knew I had to be a part of this. I couldn’t not come,” Paxton said.

With the 2018 midterm elections less than a year away, the San Francisco marchers demonstrated that had not lost momentum since last year’s march, and would not be stopped.

“It’s time to take our pink hats and our signs and take our power to the polls. We are not just the women’s movement; we are a movement of women,” Allison said.

The Women’s March is not just for women 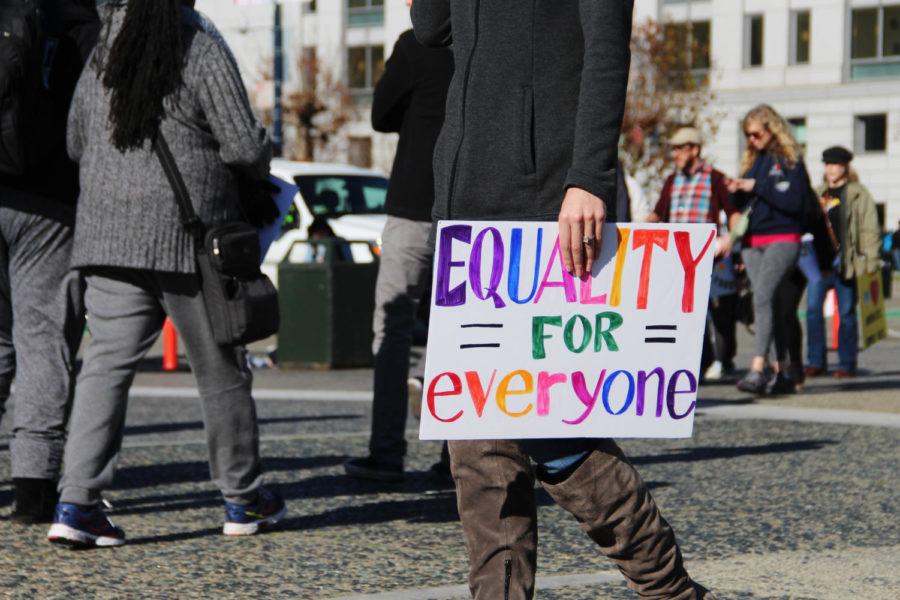 The sun beat down on San Francisco City Hall as people gathered to have their voices heard in the 2018 San Francisco Women’s March.

But the fight for women’s rights was not the only topic.

The event began promptly at noon and the march from San Francisco City Hall to the Embarcadero began at 2 p.m.

Although the Women’s March may have highlighted the fight for women’s rights, many people from underrepresented minority groups also expressed their discontent and desire for change.

Jose Delio, a Salvadoran immigrant, came to the march for two reasons.

“Women [are] under restrictions and having their rights taken away in some way or another. Today, I thought I would come out and support them,” he said.

Many of the additional causes expressed were in response to President Trump and the Republican Party’s threats against the DREAM Act and immigrants from non-European countries.

“We’re all humans, and I think everyone deserves a right to live anywhere. I don’t think it’s right to send kids back to a country that they don’t even know. This is their home,” Delio said.

Like Delio, Anjana Patel is also an immigrant. She came to the U.S. 37 years ago and joined the supporters of the Women’s March at San Francisco City Hall in response to the recent actions made by the Trump Administration against immigrants.

Patel marched for women’s rights last year in Washington, D.C. and hoped for the unification of other minority groups in San Francisco this year.

Among feminists and immigrants, other groups joined the cause to have their voices heard as well.

Catherine Sobilo, a special-education teacher, joined the march to support women’s rights, but also to shed light on the lack of funding and federal support for special education programs in public schools.

“[Special needs funding] is one of the first things that gets cut in school districts, especially in rural parts of the country. It’s just another group of marginalized people that the world doesn’t really think about. Disability rights are always being impeded,” Sobilo said.

Beyond protesting with posters and chants, artists feeling discontent with the Trump Administration decided to voice their opinions at the San Francisco march with a sculpture.

Before the march began, people gathered around a piece of art depicting Donald Trump sitting on a toilet. The sculpture is part of a project called “Flush: A Protest Project of the 45th Administration.” Contributors to the project paraded the sculpture around the protesters standing in front of City Hall before placing it in the middle of the crowd.

Elaine Badgley-Arnoux, the 91-year-old creator of this project, said, “[This sculpture] is a piece of an 18-part project representing all of the 18 categories in our government that are being flushed down the toilet. For months, I had seen toilets in my building’s garage waiting to be recycled and one day, I had an epiphany: I saw Trump sitting on a toilet. We have extraordinary artists who feel very deeply, as I do, about the actions of the Trump Administration, and we hope to spread awareness of the project.”

Speeches were made about the various groups of underrepresented people until 2 p.m. when the march to the Embarcadero began.

Although the event may be over, the causes that the march showcased are far from being resolved.

“Without representation and without unity, nothing gets done. When people come out for racial unity, class unity, and ability unity, it just says that when you try to take down one of us, you can’t because we’re all together,” Sobilo said.