Not all elections are negative 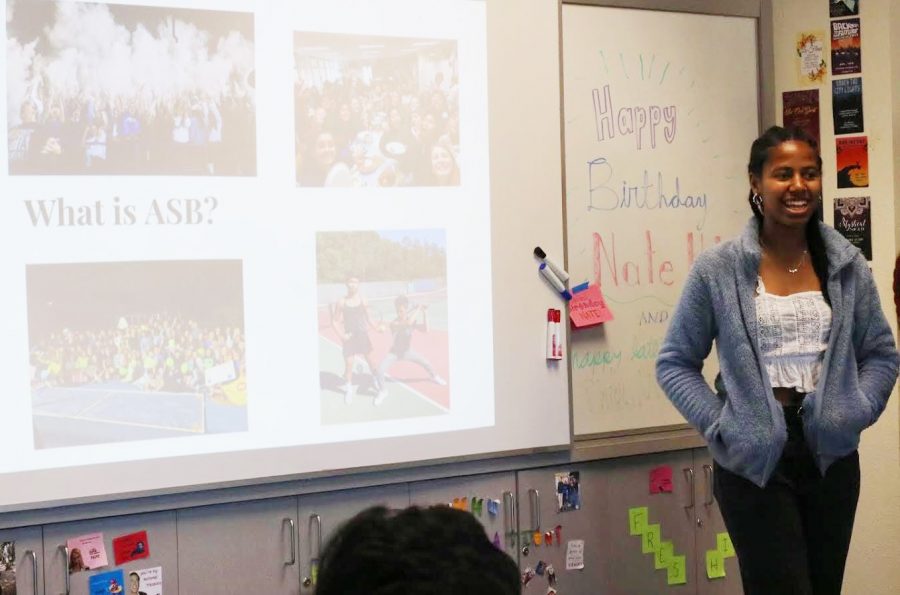 With the end of the school year drawing near, plans for next year’s student leadership kick into high gear.

Carlmont’s Associated Student Body (ASB) plans assemblies and events, decorates the school for various holidays, promotes school spirit, and much more. Also, ASB has representatives from each grade to give non-ASB members a connection to the student government.

Nate Hsich, the current sophomore class vice president, is running again for his third year as a class representative.

“I’ve always had so much fun in student government starting back in middle school. It’s always been an environment that I love being in. Representing my class is an even greater responsibility that I love doing. I try to reach out to my classmates any way I can, even if that’s making them laugh,” Hsich said.

Along with elections for class representatives, the student body also gets the chance to vote for ASB president. Nicole Doud, a junior, is running for the coveted position.

“I chose to run for ASB president because it is a great position. It provides you with a platform to reach out to a larger population of students and create programs to fit their needs. It’s a great opportunity to learn how to work independently and cooperatively and how you work in stressful situations,” Doud said.

Despite the competition, all of the candidates often remain respectful to their fellow running mates. The ASB rules state that if a student is seen putting down one of their fellow competitors, they will be removed from the running.

Sammy Kosman, a freshman, is running for next year’s sophomore vice president. She is optimistic about her chances of winning but remains supportive of her competition.

“Of course, I would love to win, but I wish all the luck to my fellow competitors,” Kosman said.

Even with the excellent sportsmanship that the candidates display, the election process can be stressful for those who run.

“I’ve been in my fair share of elections, so I know the process pretty well. It’s no doubt a stressful time of year, but it’s always exciting to see the outcome and what ASB will look like for the following year,” Hsich said.

The election process for class officers allows students to step out of their comfort zones and gain valuable leadership experience.

“Winning or losing, running for such an influential role is teaching me important skills for the future and the future of Carlmont,” Doud said. 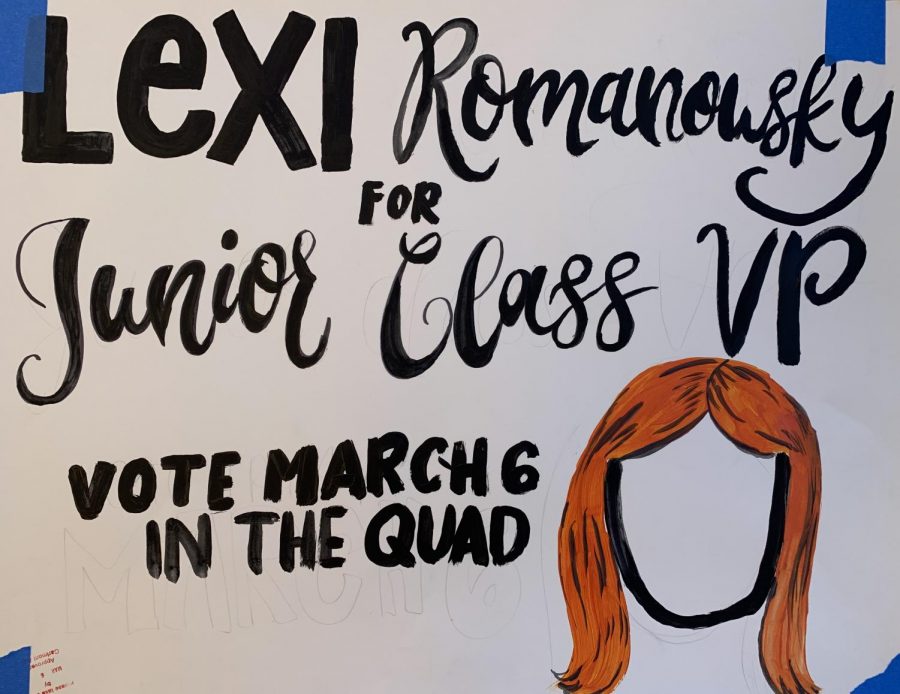 A poster convinces students to vote for sophomore Lexi Romanowsky, one of the candidates in the election.

Winning most elections don’t come without a cost, and Carlmont’s student elections are no exception. Candidates take part in a three-week-long process that includes posters, petitions, and campaign videos to hopefully win a coveted leadership position in the Associative Student Body (ASB).

In the weeks leading up to the election, colorful posters crowded Carlmont’s walls, their bright colors and big letters screaming propaganda for different candidates. During lunch and in class, students could be seen with sheets of paper, trying to collect signatures from members of their class to support their run. Posts on social media began to surface in support of different students for their desired positions.

All of this is part of the strenuous process candidates undertake to promote their campaigns and hopefully win a position.

“The Election process takes a lot of time because you have to do a lot of things like making posters and creating a campaign video,” said Jono Sison, Carlmont’s sophomore class president. “When campaigning, you realize that your time is extremely limited because, on top of activities like homework and sports, you now have to put a lot of time and energy into a campaign process that lasts weeks.”

When campaigning, you realize that your time is extremely limited because, on top of activities like homework and sports, you now have to put a lot of time and energy into a campaign process that lasts weeks.”

Besides the promotional aspect of their campaigns, candidates also must watch their actions and attitudes, making sure they set a good example for their class, are seen as role models for Carlmont, and remain respectful of fellow candidates. On top of this, they have to have ideas for how to better the school next year and appeal to the majority of student needs on campus.

“Candidates embodying the kind of attitudes I want to see around the school more is probably the most important factor for me when I considering who to vote for, as well as their goals and plans for the future,” said Matthew Ghazal, a junior.

For some, this can be difficult, as they have to prioritize their image and responsibilities above all else for their class.

“I can be a little goofy, and I have to watch what I do because sometimes I could be setting a bad example in front of people, which to me feels like I’m reflecting badly on the whole class of 22,” Sison said.

On top of all this, there are numerous requirements students must meet to even be eligible for office and specific deadlines they have to meet.

“There’s a minimum 2.0 GPA, and if s student wants to run for senior class office, they have to have had either a year of ASB or an equivalent leadership experience somewhere else. They also have to turn in election packets that meet all the basic requirements, and a petition with 85 signatures,” said Jim Kelly, the activities director and head of ASB.

“It’s primarily run by the students,” Kelly said. “If anything, I’m a guide. Besides me, the administration and other teachers don’t have much influence at all.”

Student votes are the deciding factor that determines the election winners. A reasonably sized portion of students participate in elections and get a chance to impact the future of their school through their votes.

“Normally, we get about 30-40% of students to vote, which is a pretty large number of voters. This means a lot of our student body is affected by these elections in terms of wanting to have a voice and deciding on their elected officers.”

According to Kelly, roughly 600-800 students at Carlmont participate in the elections out of a total population of approximately 2,152. Many students enjoy taking part in the process and voting, as it gives them a sense of responsibility for their school and influence.

“Elections provide a good experience for students because they engage and entertain them while also allowing them to play a part in student government, and, in turn, the way the school is run,” Ghazal said.

Elections are beneficial for candidates as well, regardless of the results. Though exhausting and time consuming, the election process provides them with useful life experiences and teaches them important life lessons.

“The election teaches kids how to deal with stress, time management, and how to possibly deal with loss,” Sison said. “Ultimately, it prepares students for similar experiences they will encounter in the real world.”

Not all elections are negative