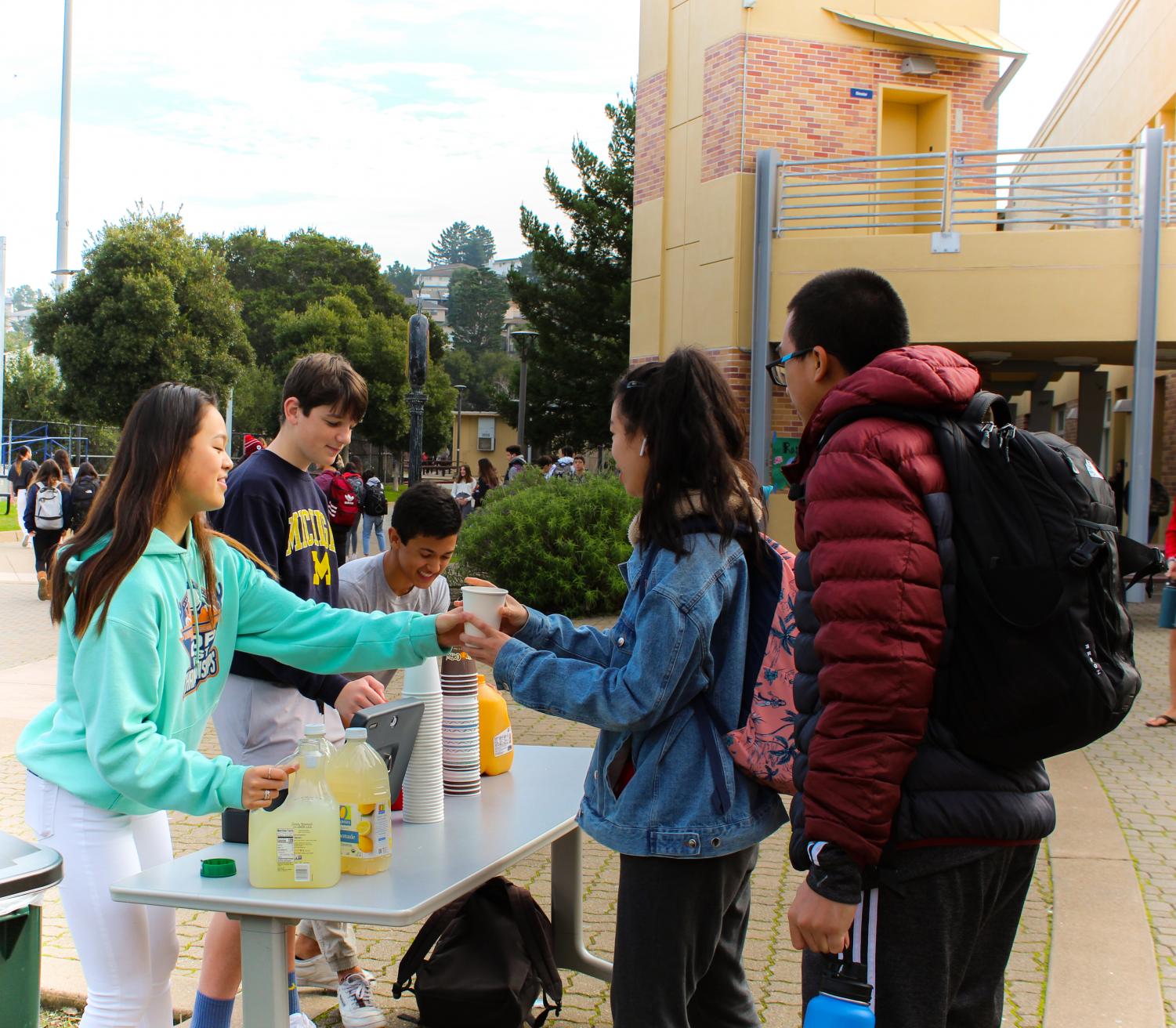 Members of ASB pour lemonade, orange juice, and fruit punch for students participating in waste-free week. “Originally, we only bought a little bit of juice and after seeing how much participation we had on Wednesday, I went out and bought more juice,” said Melina Dimick, a senior in ASB. (Hanna Kryhina)

Members of ASB pour lemonade, orange juice, and fruit punch for students participating in waste-free week. “Originally, we only bought a little bit of juice and after seeing how much participation we had on Wednesday, I went out and bought more juice,” said Melina Dimick, a senior in ASB. 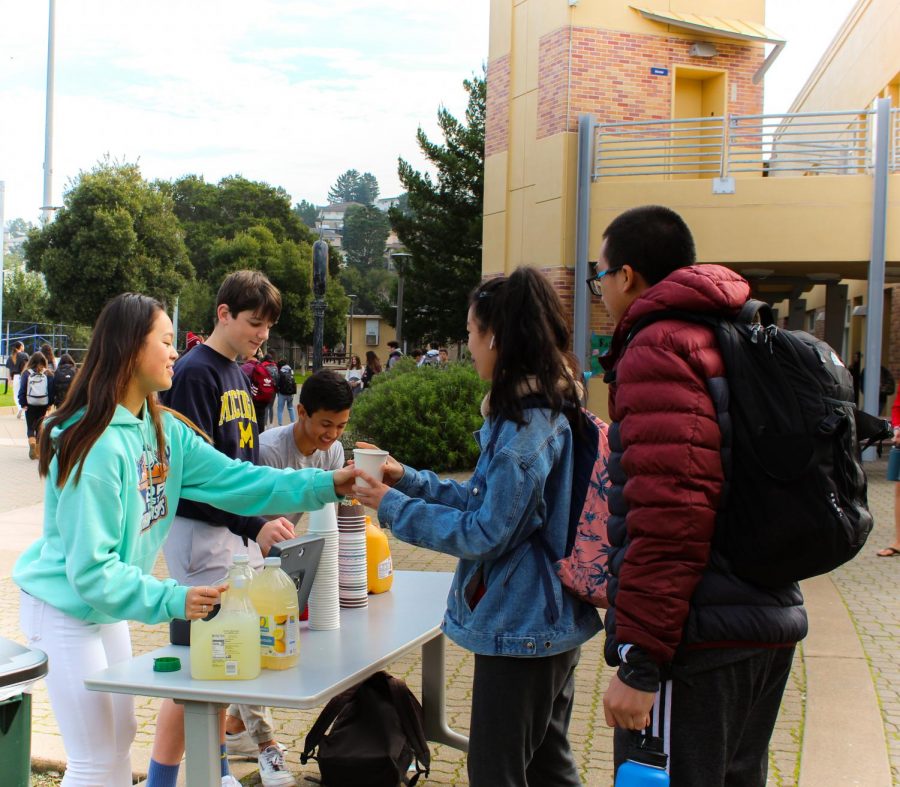 Members of ASB pour lemonade, orange juice, and fruit punch for students participating in waste-free week. “Originally, we only bought a little bit of juice and after seeing how much participation we had on Wednesday, I went out and bought more juice,” said Melina Dimick, a senior in ASB.

That’s right. Free. If you bring a reusable container.

During waste-free week, the Spirit commission of Carlmont’s Associated Student Body (ASB) gave out free snacks and beverages to students who brought reusable containers and charged $1 to those who didn’t.

According to Jackson Tam, facilitator of the Finance commission, the Spirit commission used money from their commission budget to pay for the free popcorn and drinks. At the beginning of the year, ASB distributes its funds to each commission in ASB, and students fundraise if they need funds throughout the year.

“The goal was to spread environmental awareness while also giving something to the students,” said Melina Dimick, the facilitator of the Spirit commission. “You can have free hot chocolate if you bring your own mug, and if you still want hot chocolate but you don’t happen to have a mug, you can buy a paper cup for $1.”

Sophia Stone, a junior, was encouraged to participate because the beverages were free. She realized that people don’t use reusable cups all the time because it’s inconvenient.

“I think sometimes people don’t like holding their cups, and it’s easier just to get one when you’re there,” Stone said. “[We could all use] a reminder of how bad plastic is for the environment.”

“If people don’t have the ability just to grab a single-use container, they will be forced to plan ahead and bring their own container,” Mattioli said. “We also need more filling stations like water filling stations … in the community.”

Dimick said that the Spirit commission is planning to have more events like this one and has created a special subcommittee in preparation for Earth Day.

“We’re going to have a couple more Waste-free Wednesdays […] leading up to Earth Day,” Dimick said. “We’re also going to have an environmental awareness photo booth and take pictures, and then make it into a video that students can watch on YouTube or their teachers will show them in class.”

The concept of “going green” has become a global phenomenon practiced by people all over the world. Whether it’s a store replacing plastic straws with paper ones, or somebody simply learning what to recycle and what to compost, every effort made is one step closer to achieving the goal of having a clean environment.

The Carlmont Associated Student Body (ASB) hosted a waste-free week in the quad to raise awareness about the importance of conservation and maintaining resources. Initially proposed by Allison Raisner, ASB immediately picked up the idea and turned it into a week-long mission to promote environmentalism.

“Our world right now is generally very polluted,” said Jacey Kelly, a member of ASB. “This is just a simple way to promote a healthier sense of living.”

The waste-free week began in the quad on Wednesday morning, where they gave out free hot chocolate to those who brought their own mug. Students lined up in the cold to get their cups filled, or paid a dollar to get a cup from ASB.

On Thursday, they gave out lemonade during lunch for those with a reusable container, and on Friday, they provided popcorn.

“I think people are used to just taking our clean society for granted, and they don’t think twice about waste or conservation. This week was a nice way for ASB to bring attention to the issue, while also making it enjoyable for the students,” said sophomore Sean Sommers.

In recent years, students at Carlmont have been trying to raise awareness to reduce waste. Clubs, such as the Green Team, have been created to promote environmentalism and waste reduction.

Throughout the waste-free week, only a small number of people paid for a container; most students made sure to bring their own from home. It proved to be an effective way to make the student body more conscious about the impact of being environmentally friendly.

“People weren’t just aware of being waste-free, but they were actively engaged with conservation efforts, so although it may seem insignificant to some people, every step makes a difference,” Matthew Ghazal, a junior in ASB, said.

Those who forgot to bring a container for popcorn on Friday decided to take it in their hands, which, although slightly messy, contributed to the spirit of being waste-free and conserving resources.

“I think it created a lot more awareness for conserving resources because it kept the concept of conservation on people’s minds for an entire week and gave them an incentive to be mindful of their waste,” Ghazal said.

According to DoSomething.org, Americans only recycle 30% of their waste, even though the majority of it is recyclable. The goal of the waste-free week was to combat this trend, and make people think twice before reverting back to wasteful habits, like throwing a piece of paper in the trash. It promoted being eco-friendly in an interactive way that brought the Carlmont community closer together.

“It’s a minimal activity, but maybe if we continue doing activities like this, people will start to see that this is a critical issue,” Kelly said. “It’s imperative that we use fewer waste products, and this activity was an easy way to get people involved without asking too much of them.”

Ultimately, it was a successful week in which students got to enjoy free snacks while also going green by reducing waste and conserving materials.

“Waste-free week is important because the world increasingly is becoming polluted with trash,” Ghazal said. “Every step we take to fix that, no matter how small, helps turn that around.”