Walking through the streets on San Carlos and Belmont, it's easy to miss these restaurants. 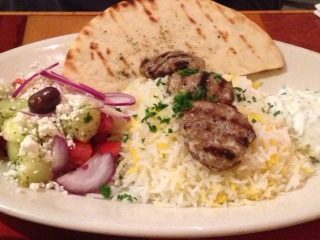 Santorini has great food, great prices, and great portions -- what reason is there not to go? Make sure to have enough room to eat all the lamb, rice, pita, and salad.

Here in the Belmont-San Carlos area, there is a plethora of pizza, burger, and the ever-growing number of sandwich places. Sometimes it’s hard to find anything that isn’t American, but when you do happen to stumble upon one, it’s typically a great find.

This was the case with Santorini, a Mediterranean restaurant located at 753 Laurel St., San Carlos. Santorini is a quaint place that’s easy to miss or pass by during the day.

However, it’s a different story at night. You’d be lucky if you can even get a table. During rush hour, it’s loud and lively with the sound of people conversing and lamb sizzling on the grill. It’s something you have to experience. While it is a small restaurant with not a lot of room or tables, it’s only a problem if you come in with a large group or during rush hour.

The service was surprisingly quick. Since it is a busy restaurant, the waiters don’t interact much or create small talk, but they are very polite and respectful. The food was on my plate in about ten minutes — faster than most restaurants. Nothing was cold, and everything was hot. Be warned: heat is liberally used with the soup, so watch your tongue.

Onto the food, I tried two items: the “Kefte” plate (minced beef and lamb kabob with rice, greek salad, and tzatziki) and the “Spicy lamb wrap” (with lettuce, tomatoes, red onions, tzatziki).

Both come with soup with a choice of Greek salad or chips. While I didn’t try the salad, the chips are a must-have: they’re crispy and crunchy while not being overly salted like some brand name chips. They also had a drizzle of lemon, and it shocked me at how much better they tasted with it.

The soup was somewhat of a mystery. I knew two distinct things: it was really good, and it was really hot. It felt like summer all over again: warm, creamy, and hearty with bits of potatoes. It’s quite rare to come across a soup as delicious as this one.

The entrées themselves were phenomenal. I can confidently say that the lamb here is some of the best I’d ever had. The spicy lamb wrap was mildly spicy, with the lamb cut in small, savory, and extremely tender pieces. The crunchier lettuce and onions added a nice contrast to the tender lamb and soft pita. The tzatziki sauce helped with the spiciness, adding a lighter and more mild flavor.

The “Kefte” plate was essentially a sampler plate with loads of food. The rice was infused with saffron and bursting with flavors. The lamb was not spicy, so I was able to eat it in large quantities without the fear of needing to order another drink.

The entrées’ sizes were definitely worth their prices, with both being $11. Most of the entrées at Santorini are around $13 or $14, with only a few being over $20. There’s no need to worry about your wallet going empty.

Lastly, their dessert deserves a mention. Santorini serves just one item: baklava. They come in orders of four for $5. The pastry is warm, made of layers of filo, and dusted with powdered sugar. They were top-notch — a light dessert with just the right amount of sweetness. They are small, so after your large lunch or dinner, you will likely have room for these pillows of flavor.

Overall, Santorini is a restaurant that serves food full of flavor. The food is fairly-priced and well-worth every dollar spent. Just be wary that during rush hour, it’ll be packed and harder to get a table. It’s a great choice for a small group of friends or a quick lunch. 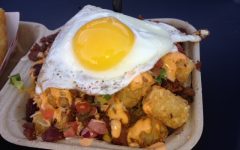 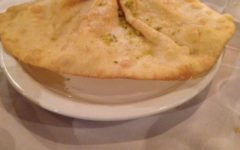 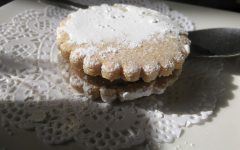 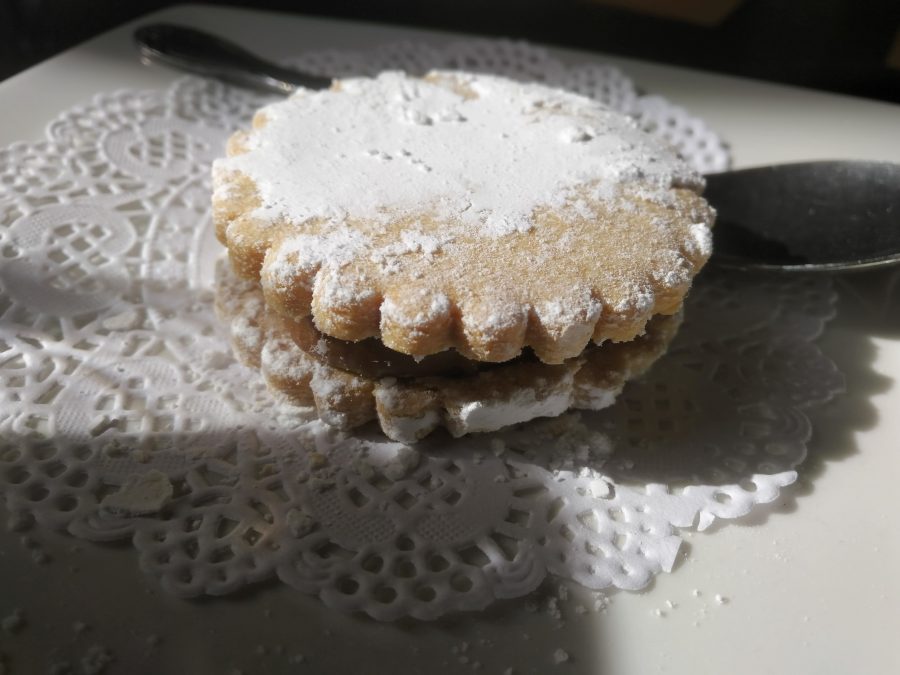 An alfajore has a crumbly, sugar-coated top which conceals a delicious dulce de leche-filled interior.

Going farther than I typically do, I went to San Mateo to explore the wonders of Latin cuisine at Mancora Cebicheria. Because it has such good reviews on Yelp, I decided to check it out. The first time driving past it, I almost missed it. It is a nondescript restaurant, blending in with the buildings next to it: not exactly “hole in the wall,” but just nondescript. Inside was the most organized scene of chaos I’ve seen. A stout, red-faced man ran from table to table making accommodations for the coming customers, and a waiter with greased hair ran around taking orders. There was a bit of a wait before I was seated since it was pretty packed.

The menu is a simple one, very similar to Heidi’s Pies’ menu: various items displayed along the sides and filled with color. When we sat down, a small tray of nuts, what appeared to be raisins, and a little cup of sauce was placed on our table. If you feel masochistic, or just love extremely spicy foods try the sauce; otherwise avoid it at all costs — I had to learn it the hard way.

To drink I had the ‘Maracuya’ which is Peruvian passion fruit juice. It was really good — it tasted naturally sweet, not like some chemical cocktail injected into a soda, but rather a genuine sweetness. It had a few of what seemed to be pineapple pieces in it, which were extremely flavorful after soaking up the passion fruit juice. The juice itself quite sweet (though not too much), and gave the illusion that it was syrupy, which was a cool feeling as it traveled down my esophagus.

The food was probably some of the best Peruvian food I’ve had for a while —   I daresay even better than the Peruvian cuisine I had in San Francisco a while back. It had that earthy taste to it, reminiscent of the heavy use of ingredients like potatoes, which is traditionally used in the cuisine.

I also ate two anticuchos, which are Peruvian beef heart skewers. They were an enigma themselves, having a texture similar to that of chicken liver, which puzzled me. They were very rich for pieces of beef smaller than my palm — I began having a small sensation of fullness after being only halfway through the second one.

Avoid the sauce it comes with unless your tongue is a husk of burn resistant scar tissue; it left my mouth in a raging inferno until I drank a third of my maracuya juice. It had that aforementioned earthy taste and was heavily flavored. Also order a few of the skewers; one won’t be enough to fill you.

I also got a taste of the “Lomo Saltado,” a meal consisting of beef and potatoes but in this case french fries. The beef’s drippings were very tasty when slathered onto the antichuchos’ meat. The pieces of beef were extremely tender, and the french fries were drenched in the beef’s sauce. What a wonderful medley of flavors it was.

While it was far more diverse and colorful than the plain anticuchos, I did prefer the anticuchos over it, simply because the flavor and strength of it were far more apparent (I also have been dying to try them ever since I discovered Peruvian food).

Lastly, perhaps the most tantalizing item I tried that day was the dessert. It was a shame I couldn’t explore it earlier, because it was so beautiful — not only in the presentation sense but the way it exploded with deliciousness. First was the lucuma ice cream, made with lucuma, which is a fruit native to Peru and the Andean Valley. It is sometimes called “the hidden ice cream gem of South America,” and I definitely saw why.

It was a very light ice cream, almost the flavor of butterscotch, with a hint of coffee, but light enough that it isn’t overpowering like some ice creams. It was already good, but it got even better.

I also ate an alfajore, a traditional Peruvian cookie, topped with powdered sugar and filled with dulce de leche. This cookie was so good, an entire review on just this cookie could only be sufficient to describe it. I ate it together with the ice cream and was blown away by how good it was.

Two intersecting flavors: one light, one rich, one soft, one solid, and yet they ran parallel with their flavors. Simply spectacular are the only two words I could describe what it was like.

Definitely go here; now you can finally brag to your friends that you’ve had Latin food that isn’t from Chipotle. Tip: if you’re having trouble finding the restaurant, look for the yellow sign on the above the restaurant saying “Mancora” in large letters. 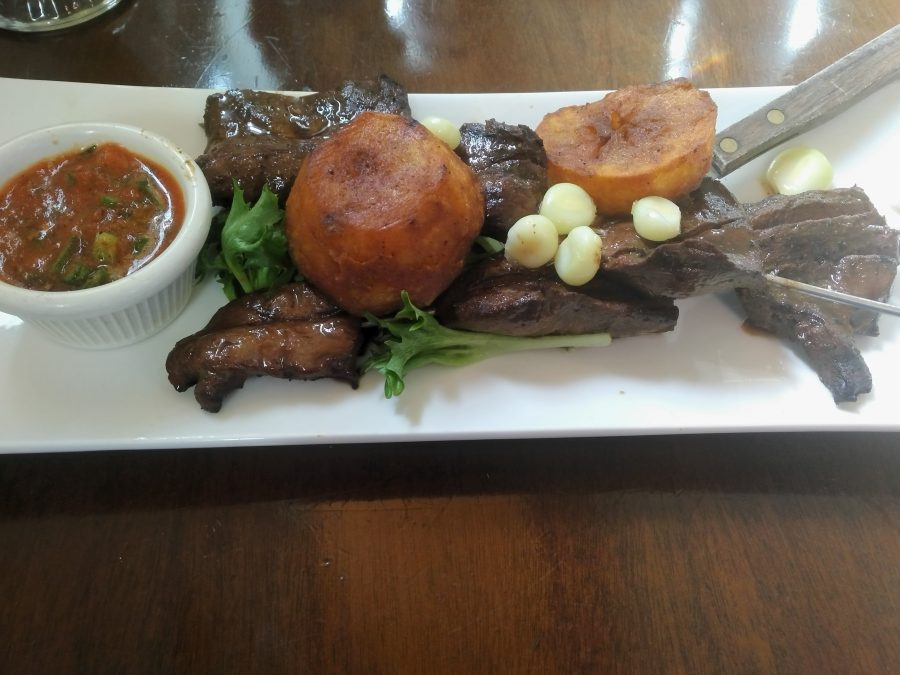 Gallery|5 Photos
Jackson Monge
Oddly similair to chicken livers, these rich delicacies are to die for.
Leave a Comment