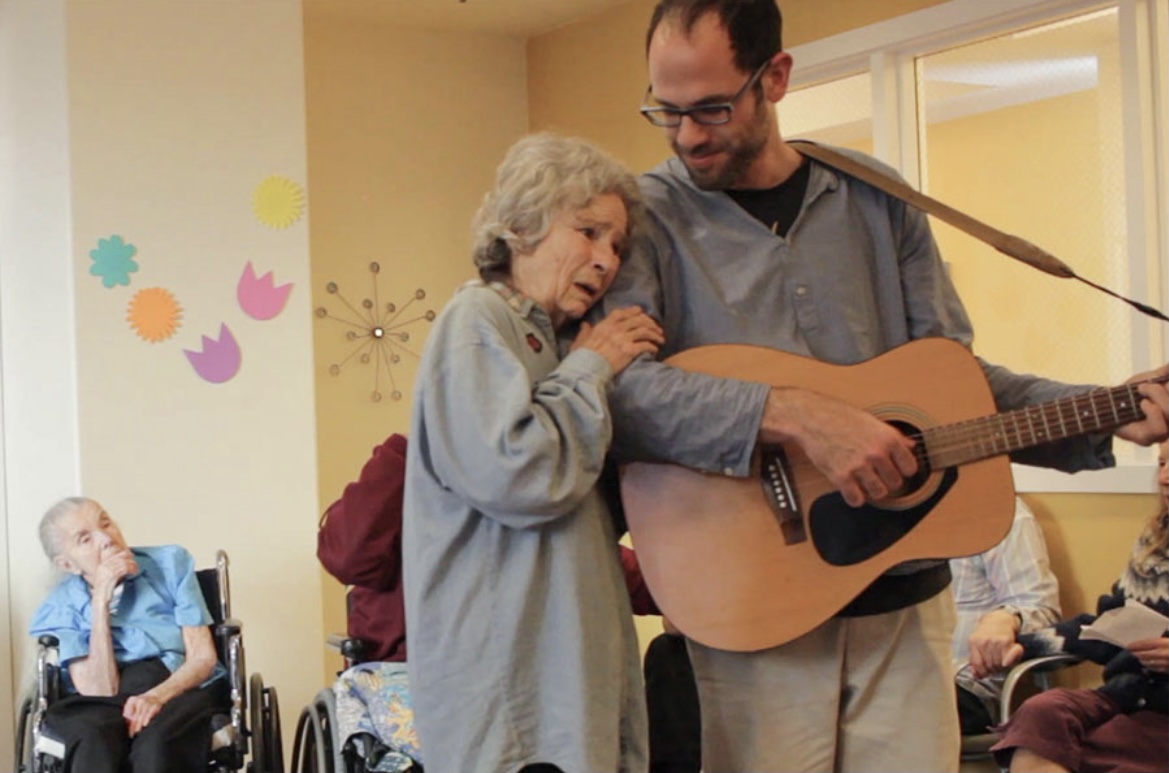 Music may be the best medicine

Henry Dryer never interacted with anyone. His mouth barely uttered a word. He lost his memory because of dementia. But when music filled Dryer’s ears, his mouth sounded the words in the song. He began recollecting memories from his past, all the way back to his school days.

His doctor, who had never seen this side of him, was mesmerized at the sudden change in his patient’s mood. Dryer, normally silent and withdrawn, suddenly seemed full of life and able to speak about the past, sing, and express emotions, all from listening to a little music. 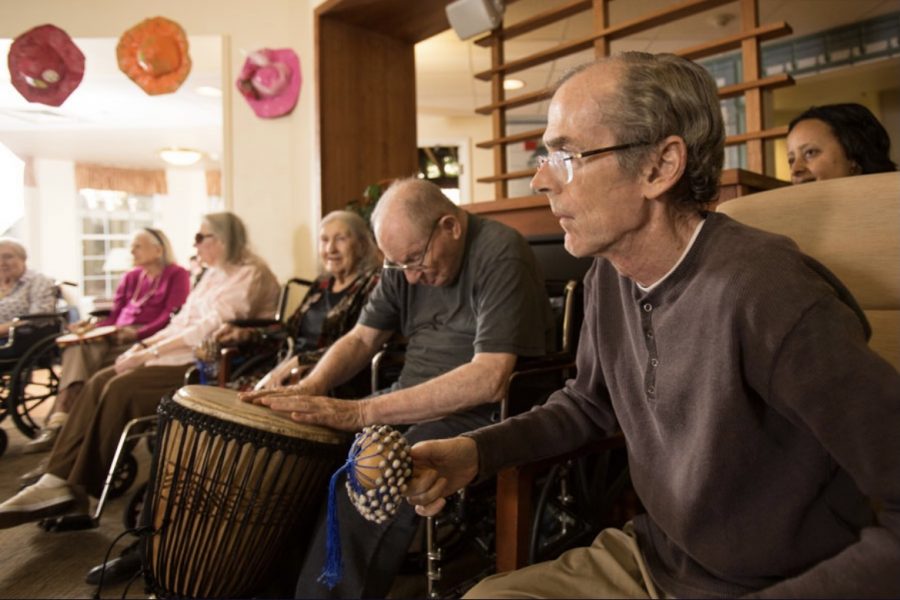 Nursing home patients play music together to help engage them and encourage a sense of community.

Listening to music is a form of music therapy, which is a new name for a practice people have done for centuries. Many cultures contain vibrant musical histories, with ancient songs and dances. Cultures also include musical aspects with a history of singing, dancing, and drumming. Many ancient cultures even used music for healing. The action of playing music together allows people to connect with others and with themselves.

“If you look back into your own lineage, you would find some of these things where people are singing, either repetitive songs or chants, and so I use a lot of that [in my work],” said Jennifer Berezan, a music healer.

During the World Wars, it was common for musicians to play songs for wounded and traumatized soldiers. Music was able to aid in the healing process, as mentioned by the Community Music Center of Boston (CMCB).

In the present day, listening to music in the car on the way to work, playing music in the school band, or singing in a choir are ways that music enters everyday aspects of people’s lives. However, many don’t understand the true power music has. 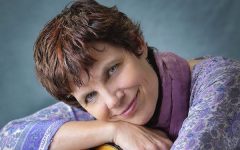 How Music Therapy Affects the Brain

Music therapy consists of listening to, playing, and writing music. But it’s not just a music class. It’s a way to help people connect to their emotions and past by firing up their brain. According to Brian Harris, music is one of the only sensory experiences that can access almost all parts of the brain.

“When you listen to music or engage with music in any way, all the different lobes in your brain are firing and lighting up. This doesn’t ever happen in any other medium other than music. So it’s really the only thing that can access your entire brain,” said Erin Blanchette, a music therapist at Timberline Knolls residential treatment center.

When someone has a neurodegenerative disease, like dementia or Alzheimer’s, music causes neurons in the brain to change and adapt. Blanchette has seen this firsthand while using music to help patients with various mental illnesses and diseases. 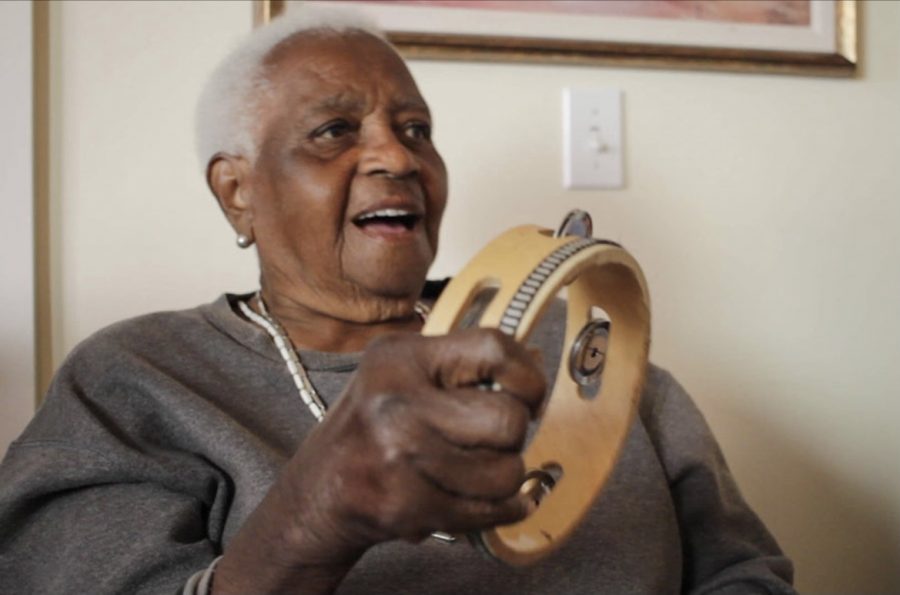 An elderly patient’s face lights up as she plays the tambourine. 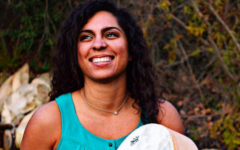 The documentary “Alive Inside” also explains how music can help heal those with neurodegenerative diseases. In the documentary, a patient, Denise, suffered from schizophrenia and bipolar disorder.

When her doctor gave her an iPod and pressed play, Denise began to cry. She sang, spoke, and wept as she listened to the music. She soon stood up and began to move her body to the beat of the music.

Suddenly, Denise pushed her walker away and began dancing on her own. Denise had been using a walker for years. Her doctor was amazed. The music gave her the confidence, joy, and strength to hold herself up.

“To bring in music [to schizophrenia patients], it was instantaneous to see their brain connect to the here and now. So instead of being in their hallucinating paranoid state, they were present,” Blanchette said.

Therapists often use music therapy for neurodegenerative diseases such as Alzheimer’s or Dementia. Still, it is also used to give people struggling with mental health a way to express their emotions.

Bang! Clap! The sound of palms hitting drums filled the room as Music Therapist Marlys Woods led a drumming session. These drumming sessions were not meant to be structured music classes. Instead, participants walked up to the center of the drum circle whenever they felt ready and released their sadness, anger, stress, and worry into the music they made on their drum.

One client, a tall, muscular man, participated in Wood’s Drumming group. Although he was not usually a very active member in the drum circle, the client walked up to the center of the drumming circle with his small drum.

With a deep breath, he banged and pounded the drum with all the emotion he had inside of him. Anger shifted into music notes, and by the end of his performance, the client was teary-eyed.

“He was quiet for a second, and then he said, ‘Wow, that’s all the anger I’ve been holding inside of me for six years. This is the first time I’ve been able to express it,'” Woods said. 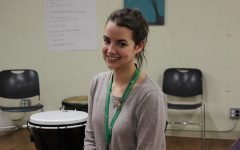 When patients come into music therapy they might be expecting to just learn to play guitar, but it’s much much deeper than that ”

Domingue lost a close aunt at a young age. She kept the emotions that came with this loss bottled up inside for the next two years.

Then, one day, she sat down at the piano. Her fingers began playing the notes to her aunt’s favorite song, and soon emotion flowed out of her, releasing all that had been held inside. Words, sentences, and stories turned into melodies.

Within five minutes, Domingue had composed a piece filled with all of the feelings surrounding the loss of her family member.

“It was my first time experiencing something like that, where I could just write how I was feeling,” Domingue said. “Since then, I’ve never stopped writing [music].”

Domingue loves music. She plays the guitar, piano, and even ukulele. However, Domingue recently received arm surgery and cannot play music for months. Still, that doesn’t stop her passion for music, and she now spends time listening to songs to analyze the deeper meanings within them.

“I feel like I’m in a different world. Music is very interesting to me, and I like to go all in,” Domingue said. “Listening to other people’s songs, understanding their music, is just an amazing experience.”

Blanchette’s music therapy sessions have greatly benefited Domingue. Now, Domingue is studying at college to become a music therapist herself.

Music has the power to heal those struggling with anxiety, depression, eating disorders, addiction, and many other forms of mental health disorders. It has also proven valuable for people with memory disorders such as Alzheimer’s and dementia.

Music therapy helps people express emotion, and, as mentioned in “Alive Inside,” it can help heal neurons in the brain, leading people to live a more expressive and full life.

“Don’t be afraid to express yourself. Music is a powerful coping skill and can bring out the deepest thoughts and emotions out of someone,” Domingue said. 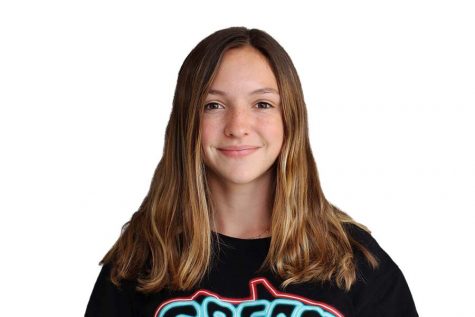 Sienna Reinders, Staff Writer
Sienna Reinders is a sophomore at Carlmont who loves talking to citizens around town to find interesting topics to write about. In her spare time, you can find her running around the streets of San Carlos to train for her next race. 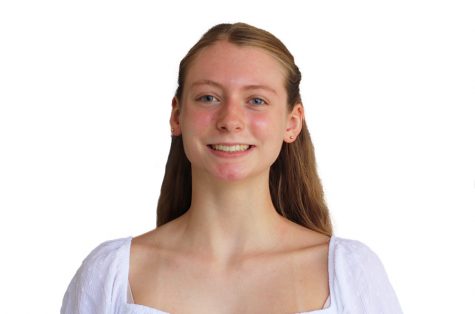 Piper Diehn, Staff Writer
Piper Diehn is a sophomore, and this is her first year writing for Scot Scoop. She is a swimmer on the Carlmont swim team, and in her free time, she enjoys shopping and reading.