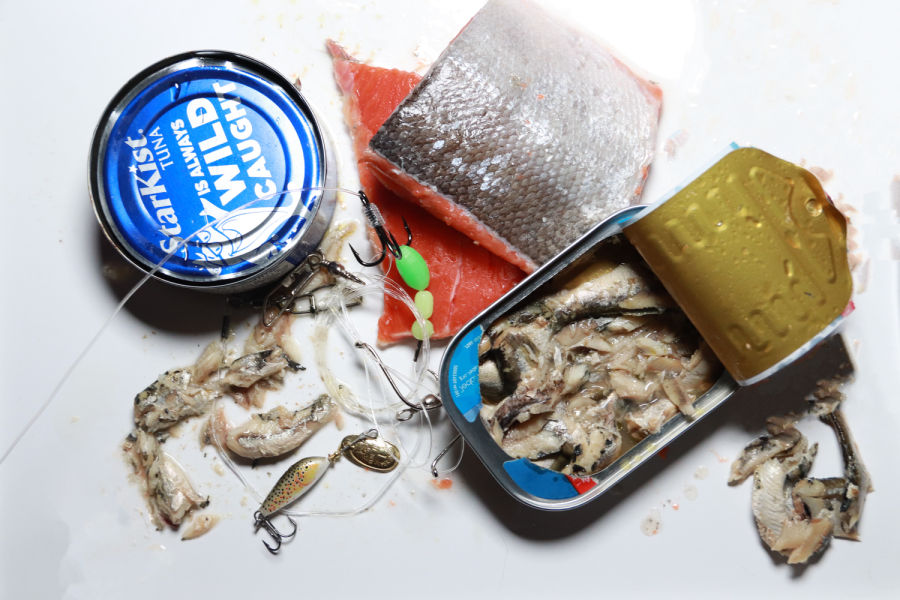 Store-bought fish comes in all shapes, sizes, and forms, but how it gets there is a mystery to many consumers.

Realities of the commercial fishing industry

While the development of the lucrative fishing industry has reeled in economic prosperity in the past, it has also led to a decline in marine ecosystems.

One major issue that has roots in the fishing industry is the loss of certain fish populations. This is mainly a result of overfishing, which refers to fish being caught faster than they can reproduce to sustain their population levels.

Sustenance of fish populations is becoming increasingly difficult because global fish production has quadrupled over the past 50 years. According to a series of studies by the University of Oxford, the world produces around 200 million metric tons of seafood yearly. The average person now consumes twice as much seafood as over half a century ago, leading to the overexploitation of certain species, including Alaska pollocks, anchovies, and Skipjack tuna.

“We continue to commercially overfish ecosystems. There is no opportunity for recovery or extra time for plants, animals, and overall ecosystems to adapt when we remove fish populations and use harmful tactics that dredge the bottom of the ocean,” said San Mateo County Sustainability specialist Kamille Lang.

Tuna stocks are in particular danger of steep decline. According to the U.N.’s Food and Agriculture Organization’s data, over 7 million metric tons of tuna are harvested each year. This excessive harvest, however, puts much of the world’s ecosystems in harm because, according to a study published in Fisheries Research, tuna harvests are spread throughout three of the world’s oceans.

The National Oceanic and Atmospheric Administration (NOAA) is an agency that manages the protection of marine species in the U.S., enforcing regulations to maintain the sustenance of fisheries that are at risk.

“Management of our nation’s fisheries resources is important to ensure their long-term sustainability so that they may provide the greatest benefit to current and future generations,” said NOAA Fisheries Management specialist Cliff Hutt.

In addition to overfishing, certain fishing methods and equipment popularly used by commercial fisheries have been directly linked to habitat destruction.

According to Oceana, an organization that conducts science-based policy campaigns to protect the ocean, bottom trawling is considered to be the most destructive fishing practice for ocean habitats than any other practice on the West Coast. This method, commonly used by large companies, describes the process of dragging a heavy net along the bottom of the ocean to catch smaller fish species. Bottom trawling leads to habitat destruction by plowing through seabeds and tearing up essential root systems of sea plants and animal burrows.

However, bottom trawling is not the only perpetrator of the environmental downturn. Other practices of pelagic trawling and dredging can often lead to bycatch, which is another common consequence of traditional commercial methods. 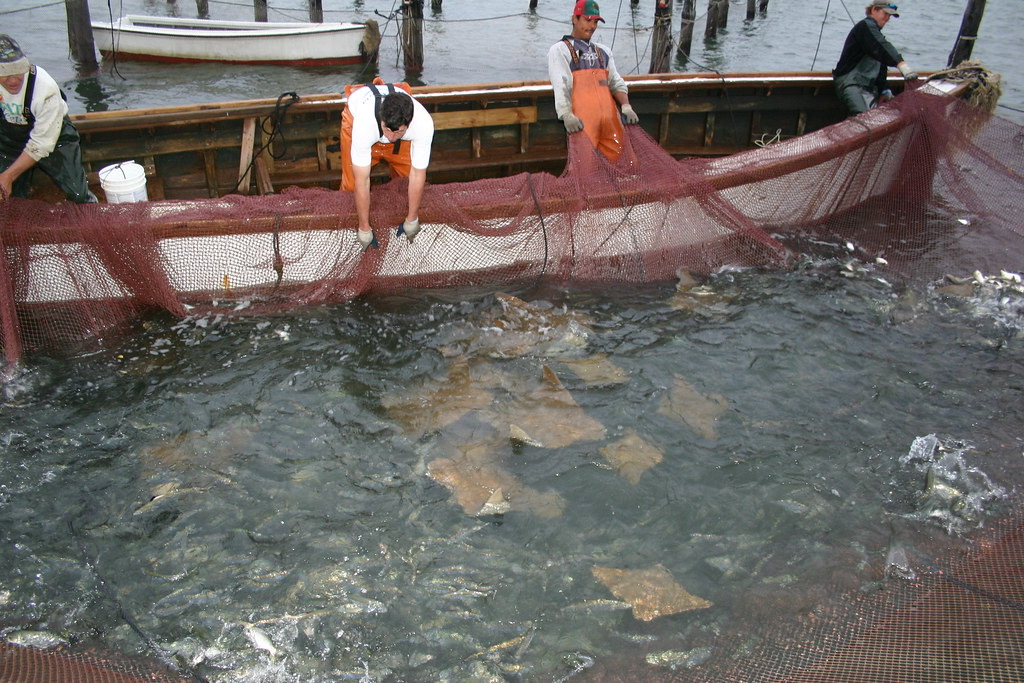 Bycatch is the capture of non-target species that may get caught in nets or on bait hooks and leads to the overfishing of non-targeted populations.

“Most bycatch in commercial fisheries are non-target fish that are not economically valuable,” Hutt said. “Unfortunately, methods that produce the least bycatch, such as the use of rod and reel fishing, often don’t produce enough catch to be economically viable fisheries.”

Bycatch also harms protected species like dolphins, turtles, whales, and birds by trapping them in fishing equipment. This poses the threat of extinction and alters the balance of marine ecosystems.

Possibilities and obstacles of sustainable fishing

Sustainable fishing is defined by the Food and Agriculture Organization of the United Nations’ (FAO) Code of Conduct for Responsible Fisheries as protecting marine fauna, or animals, by using selective methods and avoiding waste. All of these specifications are meant to respect and protect marine ecosystems.

Using selective methods prevents the occurrence of bycatch, and the practices reject the capture of endangered species or those that serve no commercial value to the company.

John Mellor, a commercial fisherman in San Francisco, utilizes a pots and trap method for catching crabs, but his traps differ from others in the industry.

“My traps have an escape ring, so the females and undersized crabs can get out because we can only keep the crabs that we sell,” Mellor said.

The practice of only aiming to catch targeted species is what makes local fishing more sustainable. 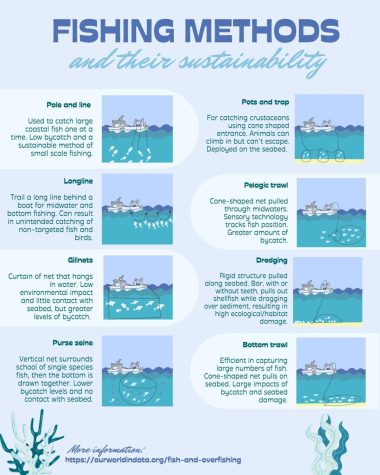 Mellor uses a longline method which entails numerous short lines attached to hooks and are then attached to the main line. This method is considered environmentally friendly because it does not harm the seabed, though it may result in capturing some non-targeted species. Although, local fishermen like Mellor throw any bycatch they collect back into the ocean.

Protecting marine fauna also means fishermen are not fishing in protected waters or in the same place too frequently.

“If we overfish, then we fish ourselves out of a job. Part of it’s just not going to the same spot over and over again,” Mellor said. “A big part of it is the diversity to be able to switch from the different fisheries and having the experience and knowledge of how to do so.”

However, the sustainability of fish that are imported to the U.S. is often difficult to determine.

“Over 80% of the seafood consumed in the U.S. is imported from overseas,” Hutt said. “While seafood produced overseas can also be sustainably managed, in many cases, it is not. That said, with today’s supply chains, there is no guarantee that seafood sold at local stores and restaurants will be domestic or locally sourced seafood.”

Fishing is closely monitored in local waters by NOAA, which uses data from electronic monitoring, surveys, and observers to inform stock assessments, which are then used to determine annual catch limits.

Supporting local businesses is a great way to ensure the catch is sustainable from water to table.

“If people dynamite the reefs, or if they catch the last living fish somewhere in some other part of the country, there’s very little I can do about that; I probably wouldn’t even know,” Mellor said. “But I know that if I go to Tokyo Fish or Berkeley Bowl — a piece of local seafood — I know where it was caught, and I know that it was sustainably managed.”

Passing legislation that promotes sustainable fishing practices is an effective way to protect the environment. Currently, the Magnuson–Stevens Fishery Conservation and Management Act pioneers the laws for U.S. fisheries. The act established regional councils that work with NOAA and the public to encourage the implementation of fishing laws and regulations.

“NOAA Fisheries is dedicated to reducing bycatch in our nation’s fisheries both to ensure the conservation of protected species and to improve their economic viability and efficiency of our fisheries,” Hutt said.

Individuals interested in legislative procedures can note the federal rulemaking process. Environmentally-minded can make comments directly to the federal government to make their voices heard.

“Individuals can submit written comments via Regulations.gov, or can submit verbal comments at public meetings and webinars during the comment period,” Hutt said.

They can also keep track of when NOAA Fisheries proposes new regulations by signing up for NOAA updates.

Advocating legislation for the environment often takes a village. Thus, environmentalists like Lang believe that change begins with small communities. Using personal values to determine where to buy fish and how frequently to eat it can start important conversations about fish consumption and its impact on the environment.

“I love saving the reason to eat fish for exclusively at farmer’s markets in Hawaii, where I get to meet the vendor and help sustain their culture and livelihood by enjoying the fruits of their labor,” Lang said.

Along with eco-friendly consumption, vegetarians and fish-eaters alike can take advantage of programs that their city offers to create an informed population. In the Bay Area, the Monterey Bay Aquarium’s Seafood Watch movement offers a variety of guidelines and courses of action to support fishing sustainably.

Additionally, NOAA offers a series of internships for students and young adults that open the door to careers in environmental preservation. They also have West Coast volunteering opportunities for anyone interested in habitat restoration.

Fishermen’s inclinations to protect our ocean could be the solution to keeping fish consumption a viable source of food and employment.

“There’s no comparison to seafood. It’s good, healthy food for people. That’s why the environmentalist in me wants to fight for sustainable fishing,” Mellor said.