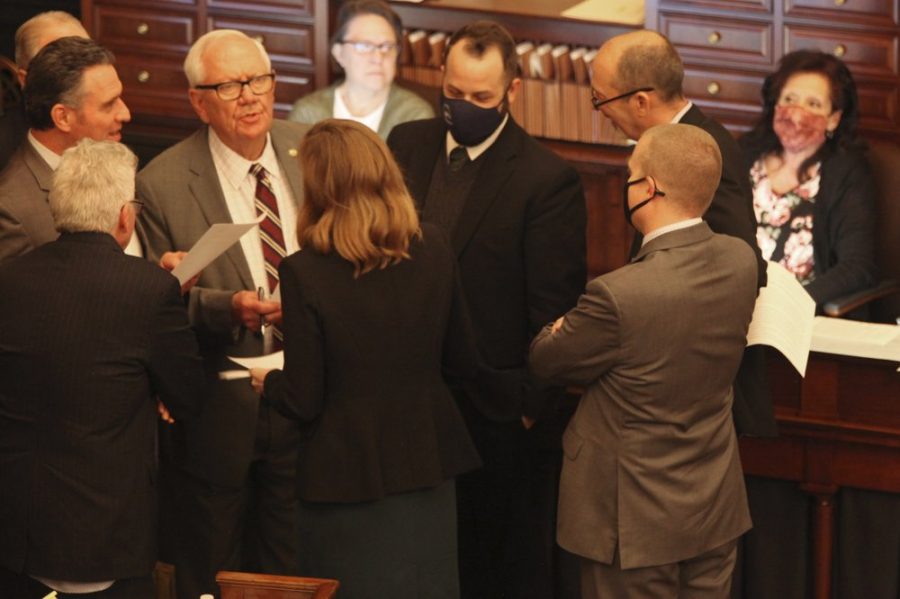 Members of the Kansas Senate’s Rules Committee confer during a debate on a bill that would ban transgender students from girls’ and women’s school sports at the Statehouse, Wednesday, March 17, 2021, in Topeka, Kan.

A white 21-year-old named Robert Aaron Long killed eight people, six of who were Asian women. Long claims he is a sex addict, and many lawmakers have said it is “too early” to decide if the killings count as a hate crime. This decision to wait has caused backlash all over the country.

What was the official police response?

The Cherokee County Sherriff’s Office has made statements alluding to the killings being crimes of opportunity. Police acknowledged signs of racial motivations but concluded that it is too early to tell. Jay Baker, the spokesperson of the shooting’s investigation, came under fire for racist t-shirts he posted on Facebook. These t-shirts said things such as “Covid 19 Imported Virus From Chy-na.” The department soon removed Baker from his spokesperson position.

One group, Stop AAPI Hate, has received over 3,800 reports of hate-fueled incidents. Asian parents are scared to send their kids to school, and Asians around the country have called the attacks “horrifying.”

A woman named Sarah Everard was abducted and killed on her way home from a friend’s house. She walked on well-lit streets, communicated with her boyfriend, and followed recommended safety precautions. A 48-year-old police officer named Wayne Couzens was arrested and charged for Everard’s death and abduction.

Has Everard’s body been found?

Women around the U.K. have been sharing their stories and protesting for more protection. COVID-19 restrictions prevented a group called Reclaim These Streets from holding a vigil, a protest where people do not sleep, but another group ended up having one.  As soon as the vigil started, police quickly broke it up, detaining and handcuffing attendants. The government has been pushing new legislation that allows for harsher restrictions on protestors, which has brought criticism and more protesting in the U.K.

The Kansas Senate approved a bill that bans transgender athletes from participating in women’s sports. Lawmakers are debating whether or not the bill is misogynistic.

According to the lawmakers, the main reason for the opposition to participation is that it will become unfair. Senator Renee Erickson even claimed that not passing the bill would set women’s rights back 50 years. On the other side, Senate Majority Leader Dinah Skyes called the bill misogynistic and harmful.

The governor of Kansas, Laura Kelly, has not said she would veto the bill. However, she has alluded to not supporting it.