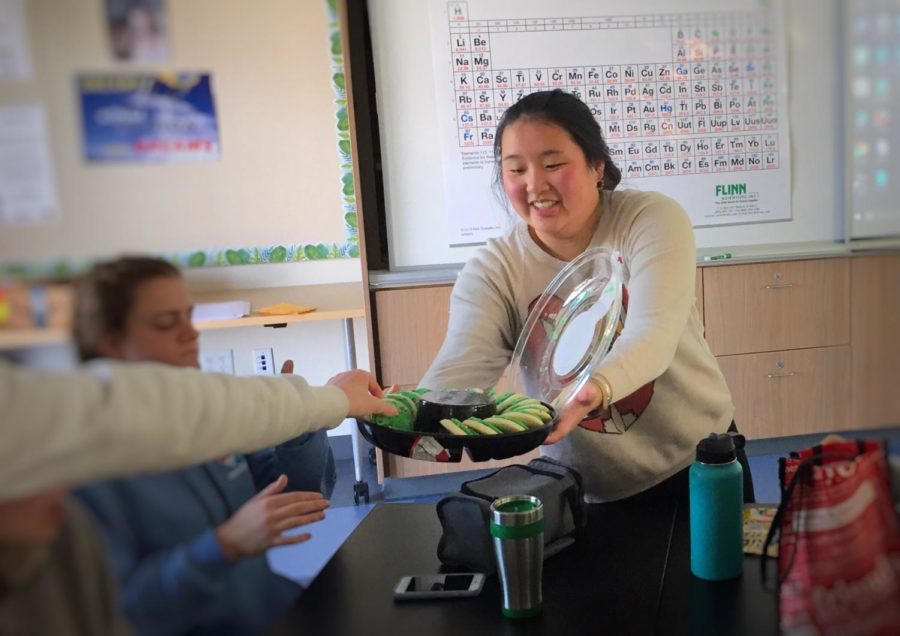 Cindy Chen hands out cookies to her Hope Brigade Club members at one of their regular Thursday lunch meetings in room S20.

You and your friends roam the busy Quad, lined with booths and chalk advertisements, in the hopes of finding decent food rather than finding a club.

A club representative hands you a neon flier, which you shove into the depths of your backpack without hesitation. What you might not be aware of is that the club was created to commemorate the loss of a loved one to cancer.

Each club has a story, and each story has an origin.

Chen is the president of the Carlmont Hope Brigade Club, whose members dedicate themselves to spreading cancer awareness and positivity throughout the community.

She started the club in 2016, a year after losing her mother to blood cancer.

“No one has ever really brought up the question as to why I began my club. I don’t believe that people consider the deeper meaning behind the clubs at Carlmont,” Chen said.

Chen’s mother was diagnosed with multiple myeloma when Chen was in kindergarten. Myeloma is a severe form of blood cancer where groups of white blood cells clot together to weaken the bone marrow, kidneys, immune system, and red blood cell count.

Throughout Chen’s elementary school days, her mother was in and out of Stanford Hospital and was not showing any signs of improvement in her health. The hospital later informed her family that they could no longer provide treatment due to the severity of her mother’s cancer.

“I was really young back then, so I never wanted to face the severity of my mother’s illness. She was always so cheery and loving, even through the pain,” Chen said.

In order to be closer and take advantage of new clinical trials at the University of San Francisco (UCSF) treatment facility, Chen’s family moved from Fremont to San Carlos.

In the midst of her seventh-grade year, Chen arrived home one day to learn that her mother had lost all feeling in her legs as a symptom of the cancer, stripping Chen’s mother of her mobility.

“It was such a sudden occurrence, but every day I had hope that I would come home and see her walking again. That day never came,” Chen said. “I remember during Halloween in eighth grade, I asked my mom if I could borrow her shawl to wear outside. I can still picture the warm smile she gave me as I went out the door.”

A week later, on Nov. 9, 2015, cancer consumed her mother’s lungs, deteriorating any strength she had left.

Even in her last hours, Chen’s mother radiated positivity.

“My mother was so kind even though she was chronically ill. The only thing she worried about was me, my sister, and whether or not her best friend had a good parking spot at the hospital. She even tried to apologize to me because I could not attend my orchestra practice that day. I gave her a kiss and then before I could register what was happening, my mother, the light of my world, was gone,” Chen said. 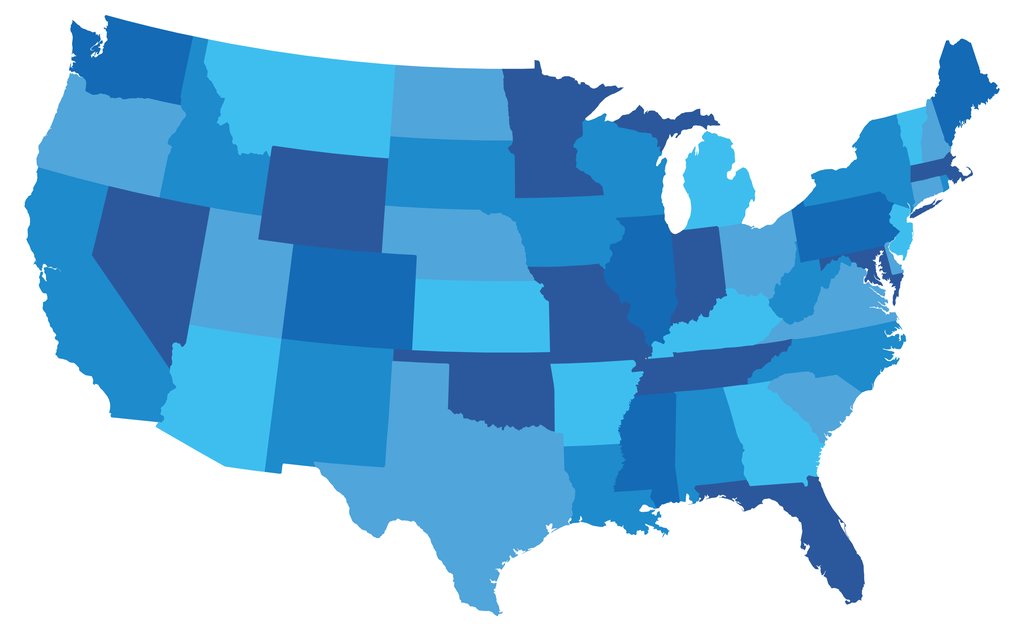 A few days after her mother’s passing, Chen came back to school and was greeted by overwhelming love and support from her teachers and peers.

Chen’s friend Nathan Chutczer said, “Cindy is the most amazing person I know because she is always so positive despite her loss. She takes on everything, the whole world, with a smile. She is truly amazing and never fails to tend to the needs of others regardless of what she is going through.”

Cindy’s older sister, Holly Chen, also had a rough time handling their mother’s passing, but she is learning to grow from the experience.

Holly Chen said, “I don’t think you can ever cope with a loved one’s death. I don’t think I’ll ever fully move on from it. For me, it’s an integral part of my life story and has taught me so much. I just now learn to live with it and channel that energy in a positive way and so has Cindy.”

“My most important piece of advice for students grieving from a family loss would be to talk to a person you love and trust. Therapists, counselors, and support groups are all beneficial, but nothing is more powerful than confiding in one you love,” Vernon said. “The way Cindy is channeling her loss into her club is one of the healthiest ways she could deal with her grief.”

Her mother’s strength and constant positivity throughout her battle with cancer are what motivated Cindy Chen to channel this loss into something positive: the Carlmont Hope Brigade Club.

Within the first year of the club opening, Hope Brigade has gained over 45 dedicated members and has donated more than 50 toys, 40 activity kits, and 12 scarves to children battling cancer at UCSF Benioff Children’s Hospital, the same facility where her mother received treatment.

“Hope Brigade has truly helped me rise from this tragedy by allowing me to reach out to others while commemorating my mom,” Chen said. “It has helped remind me each day that I have such wonderful people in my life who want to help me remember my mom while spreading cancer awareness throughout the community.”

Hope Brigade Club members are currently in the process of hand-making cancer awareness bracelets. Each color bracelet represents a different type of cancer, matching the color of its awareness ribbon, such as pink for breast cancer.

Once the bracelets are finished, the club is planning to distribute them on and off campus in order to effectively spread cancer awareness.

Additionally, Chen and her club will be holding another donation event in the spring where club members create activity kits for the children battling cancer at the Stanford Lucile Packard Children’s Hospital.

Through Hope Brigade Club, Chen strives to spread cancer awareness throughout the community while being an example of a positive way to channel grief.

“My advice for someone suffering with any magnitude of loss, as I once did, would be to know that you are loved and [that] you are strong. You’re going to feel like you’re standing in the middle of the street and everyone is moving around you; time truly waits for no one,” Chen said. “But just know that good will come out of this, and you will see things in a new light and value life so much more.”

To get involved in the Hope Brigade Club, attend one of their lunch meetings held every Thursday in room S20. 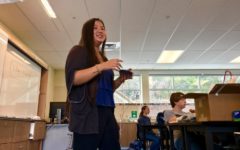 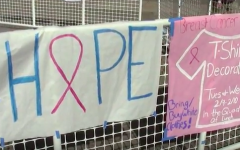