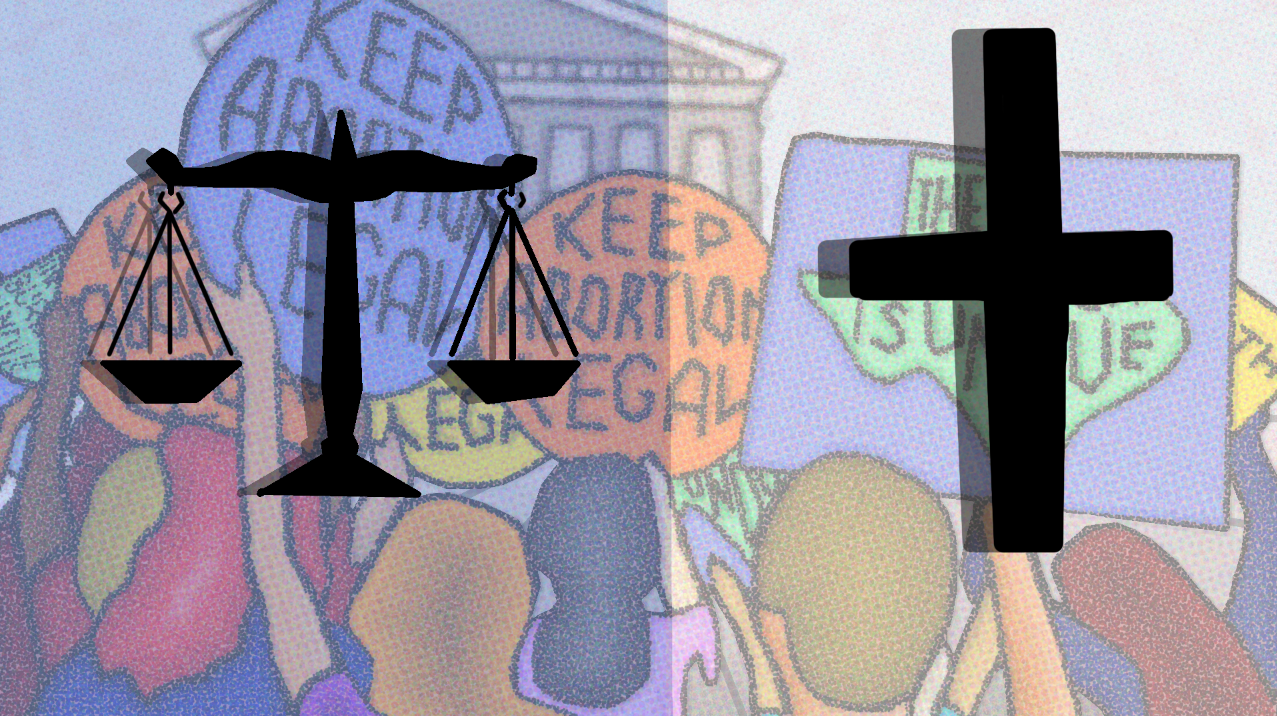 Whether religion should be tied to state on the matter of abortion remains controversial.

Whether religion should be tied to state on the matter of abortion remains controversial.

Anti-abortion legislation is continuing to spread across the United States—and it’s no different at Carlmont High School, where news of every bill is sweeping through like wildfire. In the hallways, students swap opinions on the legislation, while on social media, they keep each other updated.

Two of the most notable bills were those signed in Alabama and Georgia; the first proposes the full criminalization of abortion including cases of rape or incest, while the Georgia bill prohibits the procedure after the fetus’ first heartbeat is detected.

Although the laws differ in their severity and restrictions, they tend to have a common factor: each reflect the opinions of religious conservatives in their respective states.

Concerning backlash over the state’s recent bill, which aims to ban the abortion procedure after eight weeks, Rep. Holly Rehder of Missouri even said: “To stand on this floor and say, ‘How could someone look at a child of rape or incest and care for them?’ I say we can do that with the love of God.”

However, many religious students at Carlmont don't appreciate the religious affiliations to such viewpoints

“While I myself do not agree with abortion and do not actively support it, I do think that the punishments are unnecessarily harsh,” said Seema Wadhwa, co-president of Carlmont's Christians in Action Club (CIA). “I believe that because Jesus gives us a choice to do anything, even if it is wrong, and I should not be one to take away that choice.”

This view is mirrored by CIA Vice President Nathaniel Pon.

“[Although] I am pro-life, I am a firm believer in the freedom to decide whatever is right for yourself, ” Pon said. “The way Alabama and the other states are going about forcing their own beliefs on others is the wrong way to achieve their goal.”

CIA strives to create a safe space for everyone regardless of their religion or stance on political issues.

“I think it’s important to clarify that while the Bible advocates for the rights of the unborn, the Bible also teaches us that we are given the choice to do anything,” Wadhwa said. “We are not forced to follow any rules, rather we are invited into a relationship with God.”

Though the Bible defines life as conception and would generally condemn abortions, many Christians don't interpret it as such.

“The Bible says that God planned out every child before they were born and knew each one by name even though they weren’t named yet,” said Jonathan Su, a sophomore. “So to some Christians, abortion is like murder because it is ending the life of an unborn baby. But the most important commandments that God gives to us in the Bible is that we should love our neighbors as ourselves. No matter what someone does, I am going to love that person, and that’s what everyone else should do, too.”

Other practicing Christians do not believe that anti-abortion legislation is based on religion at all, but instead on sexism.

“I think the law is an attack on women and their bodies from white men who believe they can control women,” said junior Nicole Abrigo. “God made and created us all equal and therefore no man or woman should be making laws out of spite or to control one another.”

Wadhwa also highlighted that although religion is used as a justification for these laws, what Christians believe to be the true messages of the Bible have been lost in translation.

“It’s easy for religion to be twisted to fit certain circumstances that stray from the original meaning,” Wadhwa said.

Some students have chosen to look beyond religious teachings and have instead focused on how the law impacts others.

“My religious background used to play a big role in my opinion on the matter, but I then considered the topic as a whole,” said Rafael Montalvo, a junior. “Hearing the opinions of others, especially when considering women’s rights, has changed my mindset on the topic.”

“Lawmakers will never stop abortions. People will simply find other, often unsafe, ways to get the abortion they need,” Gische said. “I will always fight for these rights that men in government, who have no idea what they are talking about, are trying to take away.”

Gische, who comes from a Jewish background but does not identify with a particular religion, expanded upon common misconceptions about pro-choice beliefs.

“No pregnant person ever wants to abort a fetus. They have to because they are not ready to raise a child. People cannot force a person to carry a child to term and then not pay attention to the child or provide a stable home environment when they are born,” Gische said. “One who is pro-choice supports everyone having their own choice in what to do even if they may say that they will never get an abortion.”

President of Jewish Club, Victoria Tsinker, elaborated on how Judaism views abortion in comparison to Christianity.

“Judaism's and Jews' opinion of abortion generally varies. American Jews are usually pro-choice, while most Orthodox Jews are against abortion. They are less so than Christians are also because, in Judaism, a fetus attains the status of a human at birth,” Tsinker said. “However, foeticide is prohibited, so it really depends on the person and how much they choose to follow the Torah verbatim.”

Tsinker, who believes that women should always have the opportunity to get safe abortions within reasonable legal limitations, would agree that people should have their own choice without considerable influence from the state.

“I think that religion and state should always be separated from one another. That is how this country was created; the English Protestants fled from Evangelicals to seek religious refuge,” Tsinker said. “Our founding fathers decided that the government will not be directly associated with religion. The reason I say ‘directly’ and not ‘entirely’ is because religion creates a series of morals for people to live by, and so many of their decisions and actions stem from their religious morals.”

Junior Sarah Dunwoody shares Gische’s and Abrigo’s belief that there is underlying misogyny behind these laws on top of religious morals.

"The people (mostly men) who advocate for and make these types of laws are, for the most part, unknowledgeable about women’s bodies and how life-changing pregnancy can be for a woman, both physically and mentally,” Dunwoody said. “Therefore, it is extremely sexist and misogynistic to pass such laws without even considering the effects it would have on women.”

“Although religion does drive some opinions on abortion, it's not the main force.  Although not everyone that gives birth is a woman, misogyny is what inspires so many anti-abortion policies,” Hsu said. “It's male politicians wanting control over female bodies.  It's men believing that a woman's only purpose is to bear children. When the issue is analyzed, that's what it comes down to.”

When it comes to the future of birth control legislation, religious students are largely united: they want the freedom of choice for women and easily accessible birth control.

“All I can hope for in the future in regards to birth control laws is greater freedom and accessibility of birth control for all,” Montalvo said.

Abrigo advocated for the same.

“I hope for affordable birth control or that insurances cover birth control cost,” Abrigo said. “I want a system that protects women, rather than men making policies that control women and their bodies.”

Su personally felt the need for greater understanding between those impacted by religion in their values and those who are not.

“My hopes for the future of birth control legislation is that any citizen would be able to do what they think is best for themselves and their baby,” Su said. “But I also hope in the future more and more people will come to Christ, and be able to understand our viewpoint.”

A staggering number of southern states have begun to implement strict policies on abortion. Some states, like Georgia, are implementing what we know to be “heartbeat bills:” criminalizing abortion after the first heartbeat of a fetus is detected, while others, such as Alabama, are aiming to criminalize abortions entirely. Widespread backlash has come from many numerous groups of people, as most women only find out they are pregnant between four and seven weeks, and six weeks from one’s last period could easily be dismissed as irregularity rather than a sign of pregnancy.

Georgia’s law, in particular, has raised questions about those who miscarry. Georgia's legislature defines second-degree murder as “[when one] causes the death of another human being irrespective of malice,” a vague statement that the president of Planned Parenthood believes could be interpreted to criminalize miscarriages.

Although Georgia’s new legislation does not go into effect until 2020 and other elements of Georgia law protect people from being prosecuted for having abortions, the ban has propelled a domino effect among other American states.

Alabama has signed a law which bans abortion under any circumstances, including cases of rape or incest. Concerns have also been aroused over this law in particular as it has not only been the strictest prohibition on abortions thus far, but it also counts abortion has a felony, and felons are unable to vote in the U.S..

The U.S. is currently caught in a tug of war on the matter of abortion, where laws promoting the pro-choice movement are being passed in states such as Nevada and pieces of anti-abortion legislation are being vetoed in Wisconsin, while bills banning abortions after a little over than a month are being passed elsewhere.

This string of bills is motivated by each state’s individual values of life, and the religious beliefs shared by their respective government leaders.

According to a poll taken by the Huffington Post, only 31% of Americans agree with the Alabama bill, with 57% expressing disagreement and 43% strong disagreement. Likewise, most Americans would oppose overturning Roe v. Wade, which is what first ruled the prohibition of abortion as unconstitutional.

According to PerryUndem, anti-abortion voters, which account for 26% of the general U.S. populace, tend to be more comfortable with traditional gender roles, disagree with women taking office, and want women who have had an abortion to feel vulnerable or not valued.

A few conservative lawmakers—such as Republican Sen. Susan Collins from Maine—have gone against of the tide of their fellow conservatives, calling the bill “extreme." There are many other conservative women who have condemned the restrictive nature of the bill as well, including controversial commentator Tomi Lahren.

Nonetheless, Pew Research Center reported that 60% of women consider religion to be a “very important” part of their lives. This may explain why a large number of women are pro-life, despite it for many being part of their reproductive healthcare.