Scots swim their way to success

Before the announcer could even finish reporting the final results, the microphone's sound was drowned out by the shrill screams of the Carlmont Scots.

With a lead of 343 points, it was already clear that JV girls had won the PAL championships. As the cheers dimmed, the announcer tried again to finish, this time with a determination.

The Scots grew even louder this time as some swimmers even jumped back in the pool to celebrate.

The varsity girls were up next, and sure enough, the Lady Scots came out victorious and joined their teammates in the pool.

With only one result left, the anticipation was palpable.

Unlike Carlmont's other teams, it was uncertain whether the varsity boys could clinch the first-place title. However, with a lead of 82 points, the Carlmont boys were victorious, greeted with deafening cheers and joyful tears of their teammates.

The athletes of the swimming Scots will go down in history for sweeping all four championship titles for the second year in a row.

Though the team is now known as a PAL “powerhouse,” Carlmont’s swim team was not always successful in the pool.

When JV coach Jim Kelly first began coaching back in 1999, the team only had around nine swimmers.

Without the numbers of a school like Burlingame or the “talents” of Menlo Atherton (M-A), Kelly decided to first focus on bringing up the morale of the team.

While students in Carlmont have associated the swim team with their speedo runs—as they are often seen on campus with their arms linked and cheering with a loud volume that challenges the marching band—this was not always the case.

Almost all of Carlmont’s cheers and traditions were created just in the past five years.

The Root of their Spirit

Back in 2015, senior class president Nico Camerino and Lukas Kelly approached Jim Kelly, their coach and ASB teacher, for advice on how to take the swim team’s spirit to “the next level.”

With the guidance of Jim Kelly, the two varsity swimmers helped pave the way for a new dynasty of Carlmont swimming.

Though Camerino and his team's newfound pep didn't win the PAL championship after losing to M-A by just two points, Lukas Kelly kept the team spirit alive, and it paid off.

"They really made up their mind that 2016 was going to be the year; they worked out for each other and for the fact that they were not going to lose PALs again," Jim Kelly said. "Since then, it's just been the expectation, and it makes the swimmers swim really hard."

While the varsity boys snowballed after Camerino and Lukas Kelly created the team cheers, according to seniors Jade Margolis and Karen Li, Carlmont's other teams were still developing.

When Li first joined Carlmont's swim team during her freshman year, she noticed a lack of interaction between upper-level students and underclassmen.

Alongside teammate Tyler Rachal, Li set out to change that.

“We wanted to make everyone feel included. Especially when we were juniors last year and swept PALs, we just kept that energy going for this year,” Li said.

For Margolis, creating an atmosphere where all swimmers felt welcome was essential to the team’s success due to the difficulty of the sport.

However, despite their improvement in team spirit, swimming continues to be regarded an individual sport rather than a team sport.

In fact, some skeptics believe that the team's success is temporary and claim it is mainly due to key individuals such as Morgan Hawes and Luca Garlati emerging. Both swimmers have been very successful throughout their swimming careers at Carlmont.

However, according to swimmers of Carlmont such as Amy Fullerton, this skepticism could not be further from the truth, as the win was sincerely a team effort. 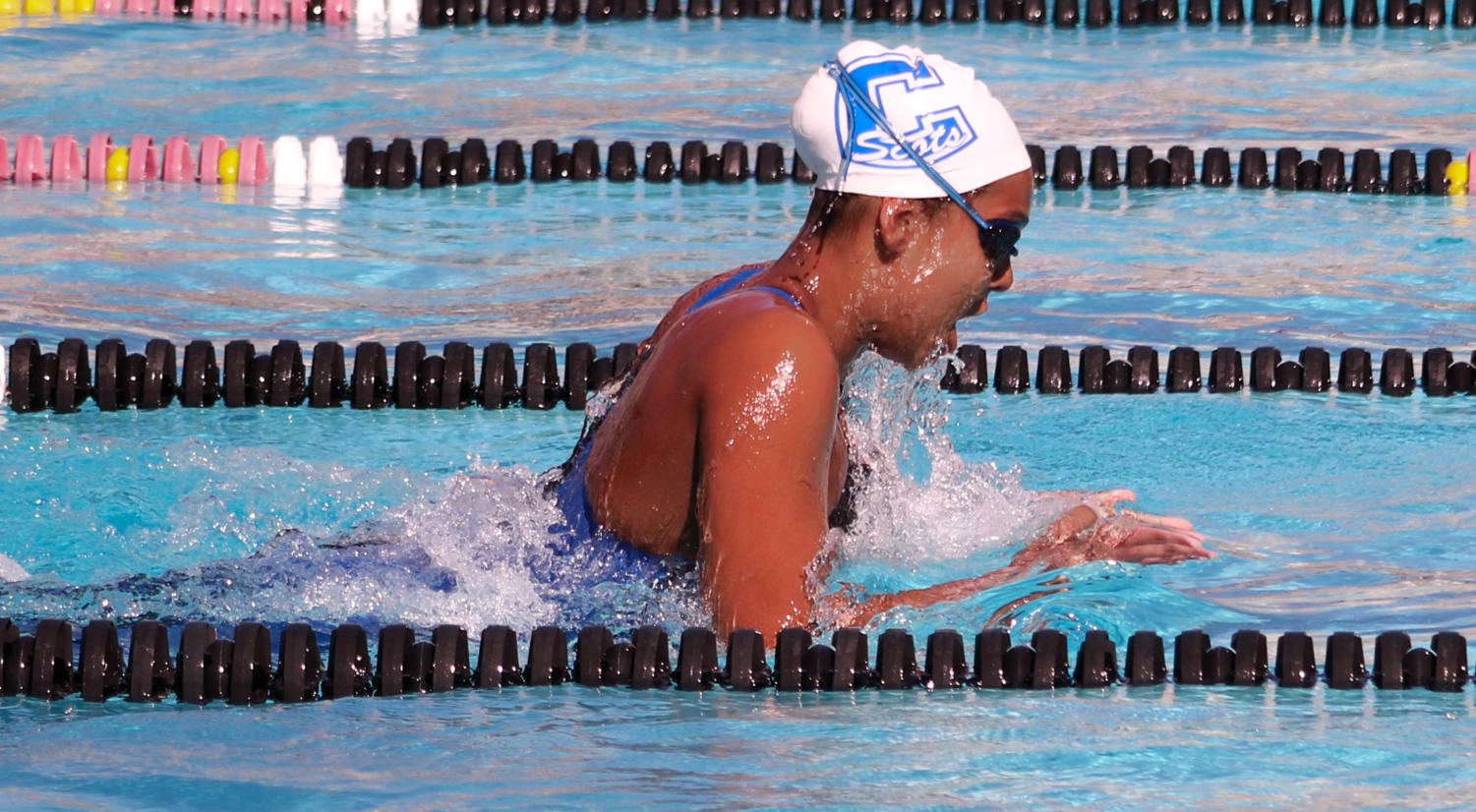 Morgan Hawes starts off her championship title streak swimming the 200 IM, securing her win with a time of 2 minutes, 5.69 seconds. 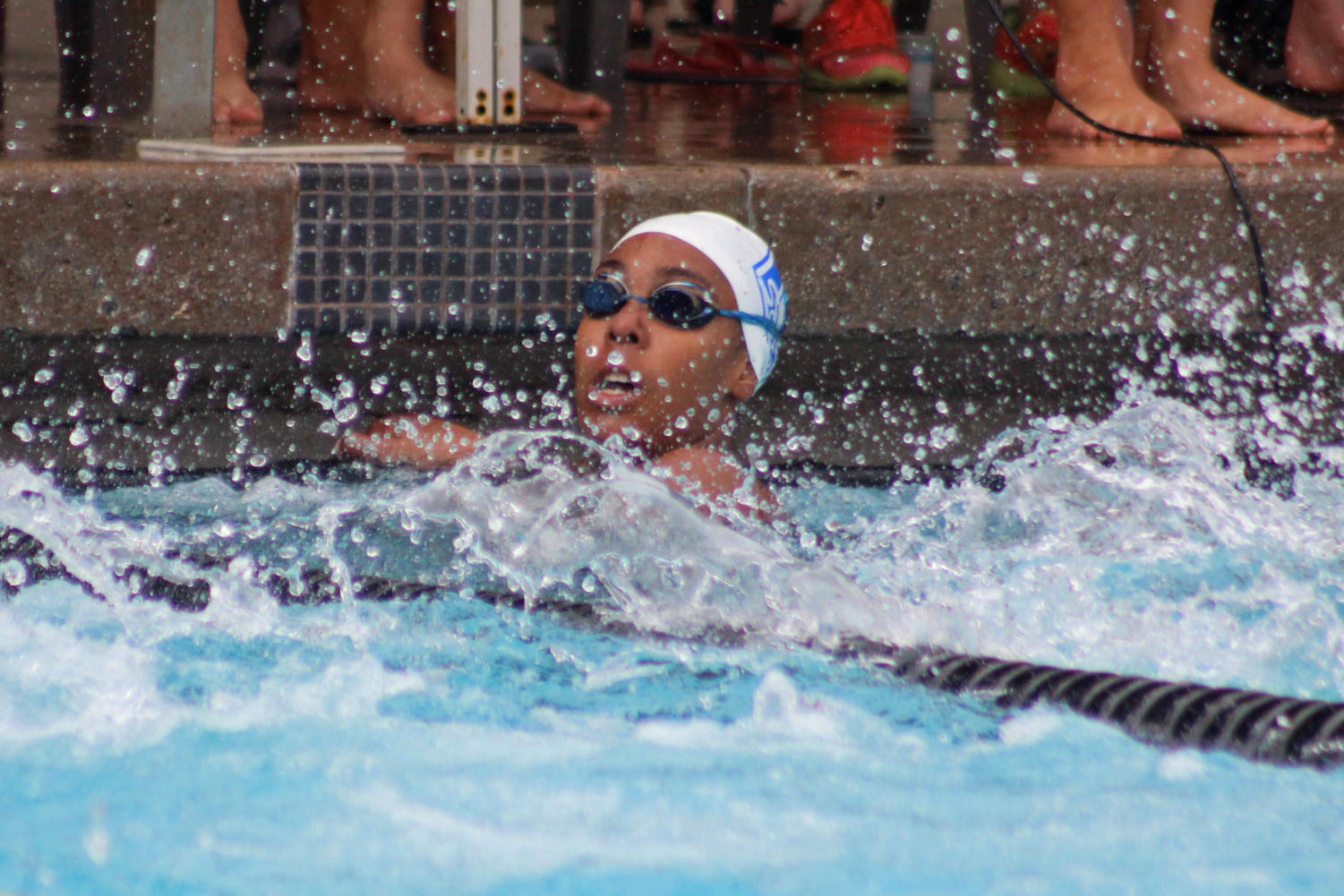 Hawes looks up at the scoreboard first with anticipation and then with glee, after anchoring the varsity girl's 400 free relay. 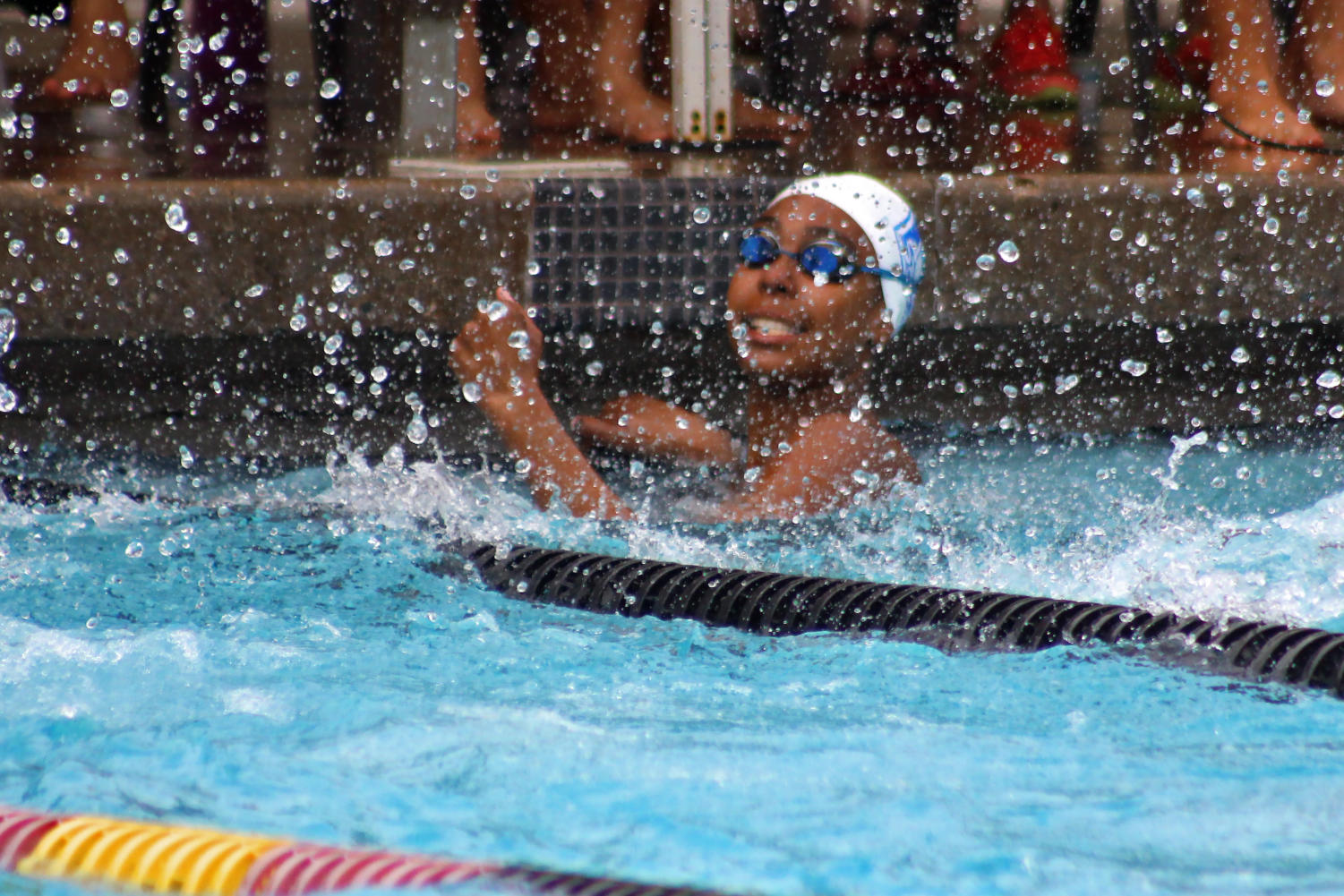 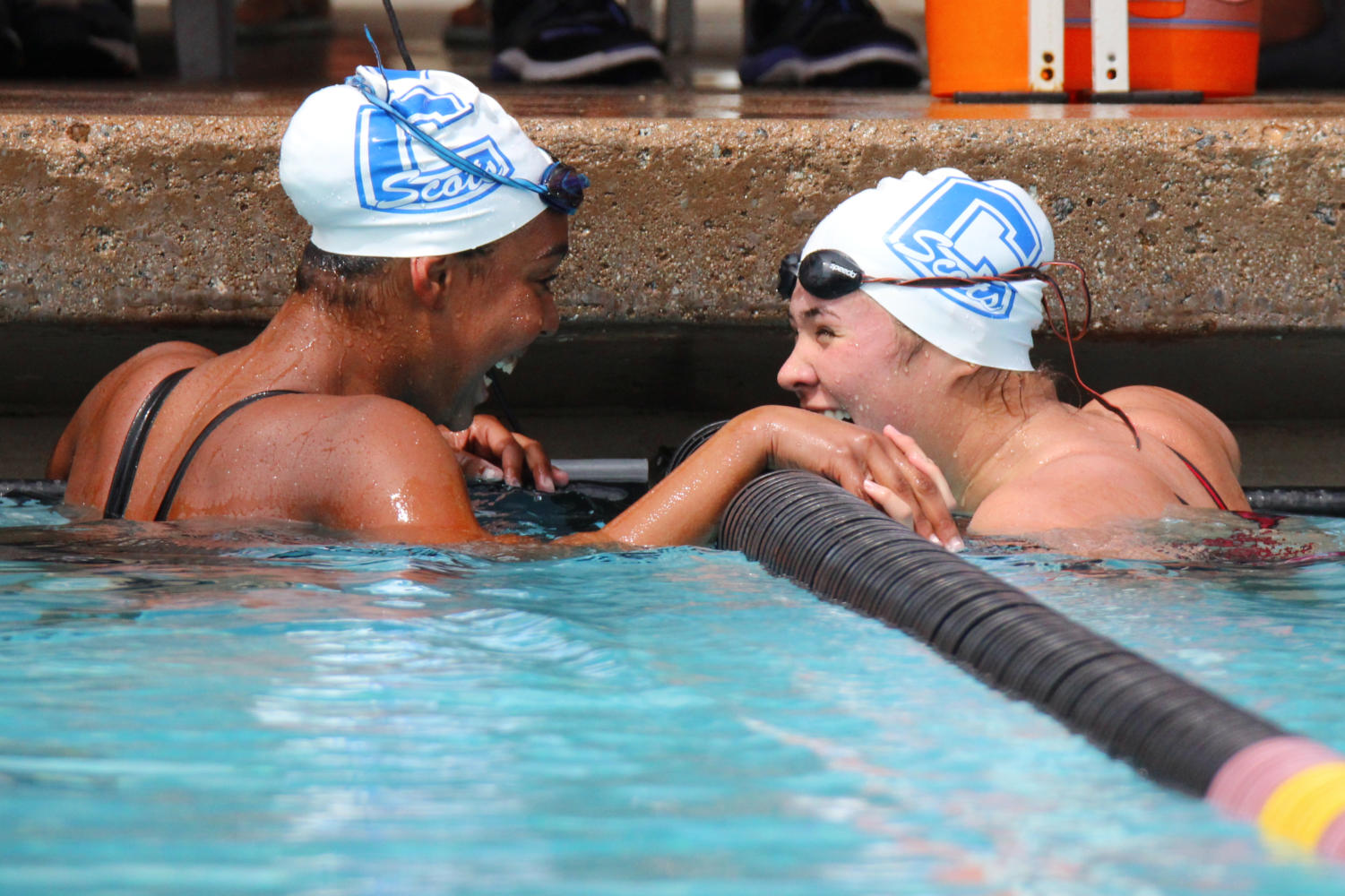 Hawes celebrates with Jade Margolis after realizing that, with the help of Sammie Lee and Emma Elliott, they broke a new program record for the 400 free relay with a time of 3:36.24. This beats the previous record that Hawes helped set last season at the Central Coast Section (CCS) championship meet.

"I really like swimming with my team and cheering them on," Hawes said. "Today was a lot of fun because not just me, but all of my teammates, did amazingly."

There Must be Something in the Water

In the stillness that falls in anticipation of the buzzer, Karen Li calms her nerves by taking a breath and focusing on the empty lane ahead. Then she'll take off, slicing through the air, and then the water.

At first glance, Li may appear isolated. After all, compared to players on a soccer field, Li competes in her own lane and cannot see her teammates.

That may be why, when asked whether swimming is a team or an individual sport, many people tend to respond with the latter.

Even though Li may not be able to see her teammates underwater, she can hear them. Their deafening cheers are carried through the ripples as she enters the final stretch.

Despite what others may assume about swimmers like Li, when she found herself lagging behind Menlo-Atherton's Ava Peyton in that final 50-meter stretch, placing first was an afterthought.

What drove her to kick harder and faster in the most crucial moment was the desire not to let her teammates down.

As Li jumped out of the pool, she quickly found herself surrounded by her fellow teammates' cheers and arms. Kayla Hogan is one of the first to embrace Li, who, at the time, was overwhelmed with tears of joy. Her mom soon followed suit, kissing her cheek and patting her shoulder.

Li is not alone, neither in the water nor in her belief that her success lies greatly in her teammates' collaborative support and spirit.

Rather than the medals they earned, the swimmers and coaches of Carlmont take the most pride in their ability to create a team where everyone is welcomed and supported.

Due to the camaraderie the team ruthlessly exhibits, the freshmen will always feel welcome, and the seniors will never forget.

Scots swim their way to success