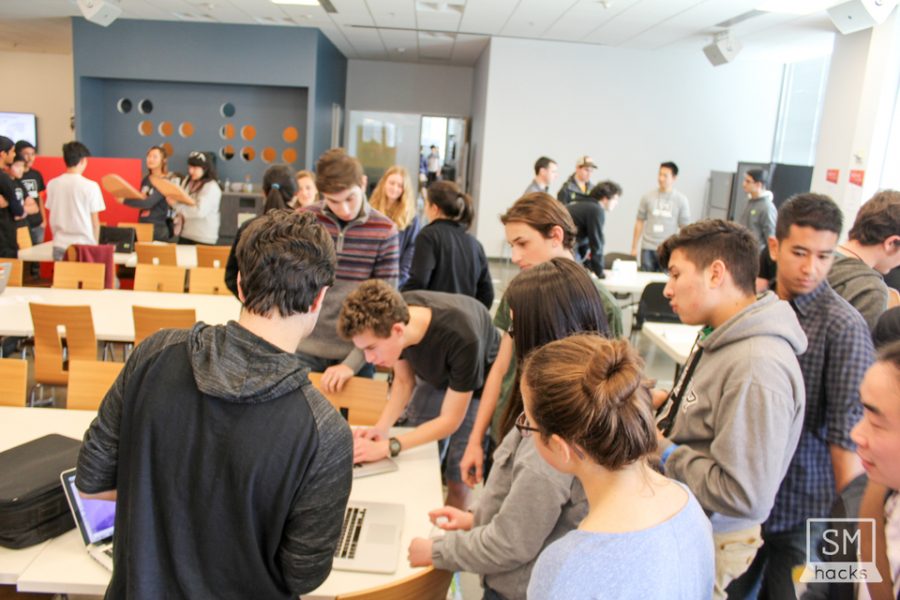 Hackers browse the demos and projects that the teams created. Before presenting their project, junior Sammi Owyang said, “We’re very tired but we have been really productive, and we have learned a lot. We’re stressed right now because our product is being graded.” Owyang was part of the team who developed the website “Weather Watcher.”

The Hackathon: Students code the day away

Coding, collaborating, and creating — all in 24 hours.

You’re sitting at a table, surrounded by other high schoolers. The area around you is crowded with people, napkins, food, even a pyramid of soda cans, but you’re too busy to care. You’ve got 24 hours, so all of your attention is focused on writing code on the computer in front of you.

This was the scene at SM Hacks, San Mateo High School’s first hackathon. Walk around Informatica — the data company where the hackathon was held — and the first thing you notice is the sheer number of high schoolers, many of them toting duffel bags for the overnighter, laptops covered with stickers, and of course, the freebies. Nearly 200 people were in attendance.

Hackathons are, to put it shortly, like marathons for people who want to code a product. But unlike a marathon, many collaborate with other hackers. At the end of a hackathon, teams can demo their products in front of a panel of judges.

Anna Singer, a junior, said, “I’ve never done anything like this for 24 hours. I feel accomplished!”

This was Singer’s first time attending a hackathon. Singer had come with three other friends of hers, and together, their team made a website called Weather Watcher. “It’s a site where you can type in any location, and it’ll tell you the weather and suggests clothing for that weather,” said Singer.

Students, like Singer, came to the hackathon for various reasons. For many, this was their first time attending a hackathon or even their first time coding — which is why there was a variety of workshops like Intro to Programming, Intro to Web Development, and Intermediate iOS Apps. It was also a chance to experience the rush of hackathons and socialize with others who found it fun to code and wanted to learn even more.

However, it wasn’t all serious. The environment was more fun and games than not, and the game corner was crowded all night long — the constant ping! and the shouts of people trying to beat each other at the arcade basketball game, the sound of the ball clacking in the foosball game, the chatting between hackers taking a break. The place was just a constant area of activity, whether it be shooting hoops at the game center or at a table typing in code. 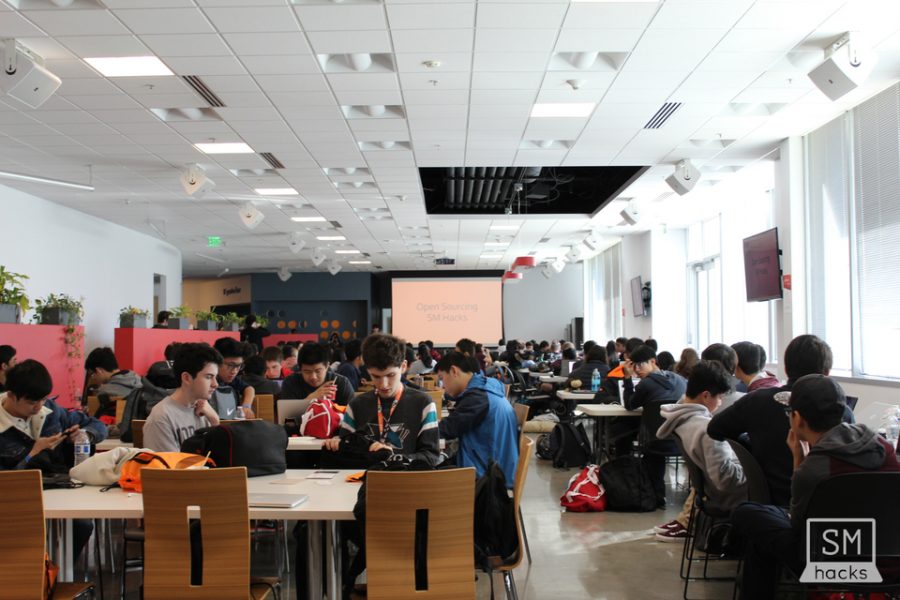 Gallery|8 Photos
Selynna Sun
Hackers gather for the opening ceremony which had several presentations from the sponsors encouraging the hackers on.

“We learned the basics of HTML, Java, and CSS from the mentors and Code Academy. [I decided to come since] I was invited by my friends; it was free, and doing it with people I knew was more fun than doing it with strangers since it was more relaxing that way,” said junior and first-time hacker Sofia Tam.

The opportunities that hackathons presented were exactly the reason why San Mateo High School senior and hackathon organizer Samuel Escapa pushed for this event.

“I hope that the people who participated in it, especially if this was their first hackathon, can see coding as something they can do, even as a hobby. Hopefully, they come again and again and keep bringing new people,” said Escapa.

Escapa and his team spent months preparing for these 24 hours — there were sponsors to find, people to advertise to, and the whole question of putting it all together. Although it was a lot of work, Escapa found it exciting to be able to work with others who wanted to make the hackathon happen as much as he did.

Their work paid off — hackers at the event had access to expert mentors who could show them a better, easier, or faster way of doing something.

“You know the product is a bit jerky and not perfect, but you still feel “wow!” It’s an addicting feeling. If as a mentor, I can help them feel that, [that’s good],” said mentor Charlie Summers.

If you talk to any hacker, there’s a high chance that they felt this rush. Using their prior experience with coding, Carlmont junior Edward Vendrow and his team built a communications app for students to get help from each other and their teachers.

“The entire thing was one big challenge; we just powered through it. When we ran the chat feature it felt like an accomplishment!” said Vendrow, who proceeded to pump his fists.

At the demos, a total of 25 teams entered their products for judging. Hackers wandered around the area, listening in on presentations and chatting with others about their projects. This was the final show, and walking around the exhibits, it was hard to believe that all this happened in the span of one day.

“We want people to come and push their boundaries. You learn while learning. They help even out [the playing field] such as the gender gap and socioeconomic class. That would be my very underlying motivation [for coming to the hackathon as a mentor],” said Summers.