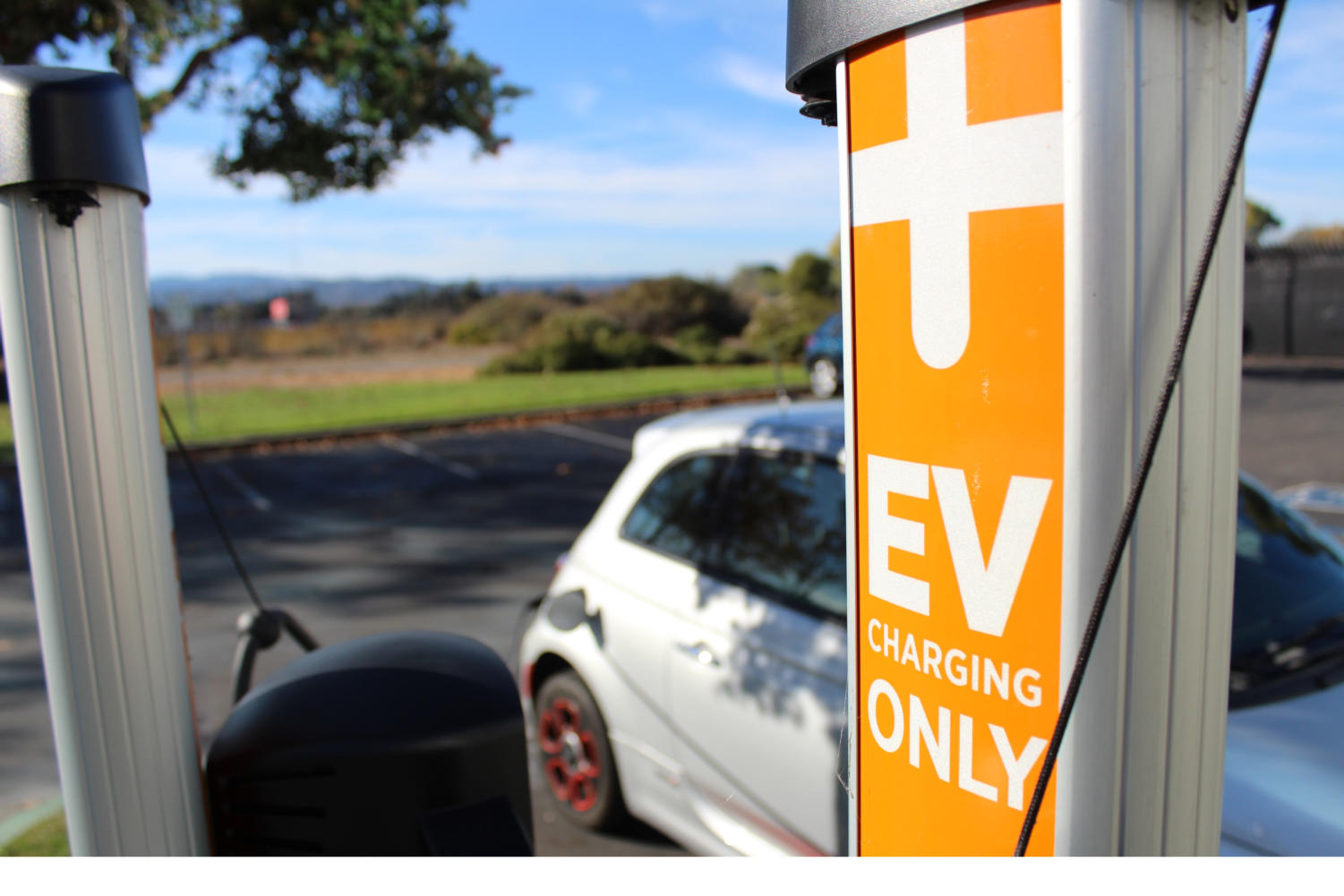 Found all around the Peninsula, electric vehicle charging stations are becoming more and more common.

The ignition switches and the engine starts with a roar. A sheet of cold morning mist covers the air, and as you take a breath, steam escapes your mouth. Simultaneously, a dry smoke begins to leak out of the exhaust. Small drops of water drip out of the tailpipe, hitting the ground one by one. The car will take more than a few minutes to warm up, but still, the smoke and water will slip out into the air all morning.

But that could soon change.

Becoming more common by the week, electric vehicles seem to be the inevitable future of road travel. Part of the reason for this comes from the public’s view of global warming.

Partially resulting from many decades of inefficient road travel, global temperatures are rising. According to Pew Research Center, 87 percent of members in the American Association for the Advancement of Science (AAAS) say the Earth is warming due to human activity.

With the temperature of the earth becoming alarmingly high as a result of humanity’s faults, society is looking towards reducing its carbon footprint.

For many Americans, an electric vehicle is their part in the solution. No drilling oil, no gasoline, no emissions, no worries — right?

“Seeing toxins in the air and knowing that gasoline cars are adding to some of that climate, I just feel better driving a car with no emissions,” said Dana Ascher, a Redwood Shores resident who owns a Tesla.

Even though most do not own an electric car themselves, students at Carlmont recognize the benefits of electric vehicles for the air and their own future.

“Electric cars are much better for the environment because they don’t pollute the air nearly as much as gas cars do,” said Tej Tummala, a sophomore, whose family owns a Tesla.

The beliefs of Ascher and Tummala are shared by many, but despite what adults and students at Carlmont think, the production, operation, and destruction of electric vehicles still have a substantial negative effect on the environment.

In spite of their relevance, both the technology and environmental effects of lithium-ion batteries are relatively unknown by the average American.

“A lot of it has to do with education, and understanding that lithium-ion batteries have been used for decades and that this technology is just more advanced now,” said Olivia Taldone, an employee from Tesla.

In a 2010 research paper titled ‘Contribution of Li-Ion Batteries to the Environment Impact of Electric Vehicles,’ a team of researchers aimed to uncover the effects of the technology. The study evaluated the lithium-ion battery’s potential environmental impacts through its entire life cycle: production, operation, and destruction (or in some cases, when it is recycled).

Although the study focused mainly on the lithium-ion battery, it provided environmental impact data for the entire battery-powered electric vehicle (cited as BEV) as well as a traditional internal combustion engine, or gas-powered, vehicle (cited as ICEV).

The reference ICEV was a gasoline car with a similar technological level to the BEV and averaged 42 mpg.

Out of the four scoring systems, EI99 H/A focused the most on human and ecosystem health, making it one of the most important to understand. The study found that for the EI99 H/A, the environmental impact of the lithium-ion battery was twice as high than any other assessment method.

This increase in impact is due to the fact that the EI99 H/A also appraises toxicity to humans and the ecosystem.

Meaning, the production of the lithium-ion battery has a considerable effect on human health.

Despite this, in all four methods, the lithium-ion battery had a limited effect on the total environmental burden of the BEV.

The study also concluded that the dominant contributor in all methods, for both the BEV and ICEV, was the operation phase. Operation accounts for the air emissions as the ICEV runs, as well as obtaining the energy needed to create electricity to charge the BEV.

While operation impacts are distinctly higher for the ICEV, the study states that the operation phase remains at a high impact level for the BEV as long as the electricity produced for the BEV is not powered by renewable sources.

Luckily, the use of renewable energy sources such as hydropower, solar, and wind are likely to increase in the coming years.

“I think we are really going to push toward solar and energy storage. That is what’s going to dominate,” Taldone said.

This domination could come in just a couple of decades. As technology becomes more advanced and solar panels more efficient every year, the benefits of sustainable energies are increasing in reliability.

The International Energy Agency’s (IEA) World Energy Outlook 2018, which is a report that shares the IEA’s views on what the future of energy might be, focuses on two possible world energy scenarios between now and 2040.

The report said, “Wind and solar photovoltaics (PV) bring a major source of affordable, low-emissions electricity into the picture.”

Affordability is one negative factor of many renewable energy sources. Drilling oil and mining coal have traditionally been cheaper, but with new technologies, solar and wind are starting to compete.

According to the IEA, “Some arguments often heard in favor of incumbent fuels, focusing on their affordability and their role in providing energy access, no longer hold as much water as they once did.” 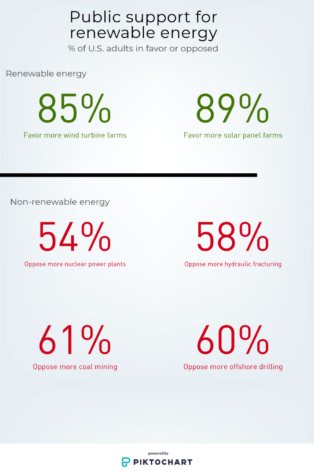 Many have taken notice of the benefits, and the public is in strong support of expanding renewable energy. In a survey conducted in the spring of 2018 by Pew Research Center, the percentage of U.S adults in favor of increasing renewable sources is an average of 87 percent.

Additionally, the majority of adults are opposed to expanding carbon-heavy energy resources.

“I definitely think solar and wind are the future, and I hope they are for sure,” Ascher said.

At Carlmont High School, the Engineering and Green Tech class researches and experiments with new technologies in sustainable energies.

“In Green Tech, we are building those wind and solar panels to try and learn more efficient ways to obtain the energy,” said Alexander Wallace, the teacher for Engineering and Green Tech.

The focus of Engineering and Green Tech is shared by many companies across the world who are working to bring sustainable energy to the masses.

Tesla and SpaceX CEO Elon Musk, who has ambitions to transform the world through sustainable energy, thinks that a future of renewable energy is both necessary and possible.

In California, new legislation aims to acquire 100 percent of the state’s energy from clean sources by 2045.

With new technologies in energy storage and solar panels increasing efficiency, a renewable energy based future seems possible for not only California but throughout the world. In the IEA report, wind and solar are set to expand between six- and nine-fold before 2040.

For electric cars, an increase in renewable energy means the negative effects of charging batteries are reduced, and electric vehicles become even more efficient.

In a 2013 interview, Musk said, “I really do encourage other manufacturers to bring electric cars to market. It's a good thing, and they need to bring it to market and keep iterating and improving and make better and better electric cars, and that's what going to result in humanity achieving a sustainable transport future.” 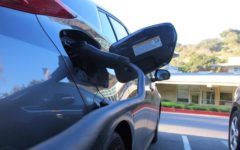 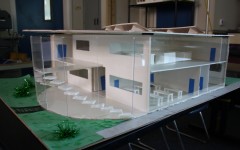 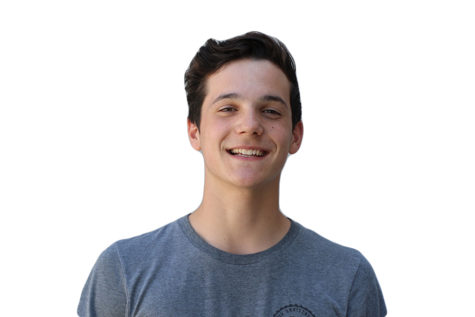 Miles Ozorio, Scot Scoop Editor
Miles Ozorio is currently a senior and Scot Scoop Managing Editor who looks to tell the underlying story of emotion in sports. He plays basketball for Carlmont and is involved in sports organizations both inside and outside of school. To check out his portfolio, click here.